Midway through the building process for Tom and Marti Burbeck’s Tuscan-inspired farmhouse on 15 acres in Ann Arbor a few years ago, Tom posed the crew a question. 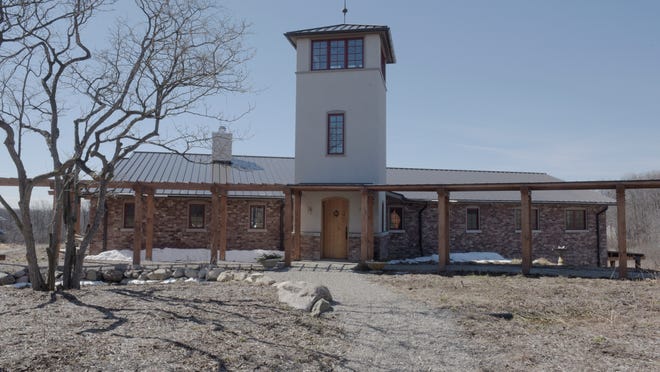 What, he wondered, was different about building this house compared to others the crew had built?

“They looked at him and said, ‘Everything,’ ” remembers architect Michael Klement with a laugh.

That may be an understatement. The Burbecks have built an environmentally friendly home that is truly one of a kind, not just in southeast Michigan but across the globe.

Built with the greenest materials available and designed to stand more than 200 years at least, it’s one of only two homes in the world that has received Living Building Challenge certification by the International Living Future Institute, meaning it meets the most rigorous proven performance standards for green buildings. Using photovoltaic panels and geothermal heating, it actually produces even more energy than it consumes (and enough to charge the couple’s Chevy Volt).

The Living Building Challenge “uses the analogy of a flower so a building should be a like a flower,” said Marti, a former math teacher, sitting in her living room this spring with Tom, co-owner of a software company.

“A flower gets everything it needs from the land and the air right where it is. And when the flower dies, it regenerates the soil and does good for the Earth right where it is. So all the materials in the building, they’re not just green materials. They’re designed to decompose at the end of their life and go back into the Earth.”

And just in time for Earth Day on Sunday, the Burbecks will open their home, which also has LEED platinum certification, for tours. Guests will get a chance to learn about the house’s technology, methods and materials (see box for details).

Tom and Marti insist they didn’t set out to build the greenest home possible but once they started down that path, it made sense to continue on it. There was a point during the building process as the team gathered to go over the latest twist that some questioned if they should abandon certain requirements that they needed to get certified.

“All these questions started coming up, I said we just had to do the whole thing,” said Tom, a lifelong architecture fan. “I couldn’t imagine tackling a project like this and not going for the gold.”

The house — which also one day will be surrounded by a permaculture farm and already has a name, Burh Becc at Beacon Springs (which means “a dwelling by a creek,” in old English) — is a completely different way of thinking when it comes to building a green home, says Klement, the architect, of Architectural Resource.

It’s “not about doing ‘less bad,’ ” said Klement. “It’s about doing right. And every decision that went into this house looked at not just an incremental decrease in doing bad, but a complete rethinking of what it means to build.”

But that doesn’t mean it was easy.

Burh Becc, which spans 3,400 finished square feet, took more than three years to design and a year and a half to build. The Burbecks moved into the house in October 2016 and had to go through a one-year audit of their energy usage before they could get certified by the Living Future Institute in December 2017.

One of the biggest hurdles was finding eco-friendly building materials. Every component, from insulation to windows, had to be vetted to make sure it didn’t contain any one of about 600 chemical compounds, such as PVC or asbestos.

And the wood had to be Forest Stewardship Council certified, meaning it came from responsibly managed forests that provide environmental, social and economic benefit.

“We rejected about 400 products because they’re just really not good to manufacture or live around or not good once the house falls down,” said Tom.

Recycled materials are also incorporated throughout the house, including a handcrafted dining room table that Tom designed and Brice Madden of Detroit House Carpentry built from a diseased cherry tree on the property.

Tom and Marti say they’ve always been proponents of sustainable living — “Everybody’s into sustainable living. We all try to stay alive. If you’re not, you’re probably dead by now,” jokes Tom — but it was Klement that introduced him to the highest level of green building.

Walking along the edge of their 15-acres, the couple — who had originally planned to retire to a cabin in North Carolina but had to rethink those plans when one of their sons was diagnosed with a chronic condition that required them to be nearby — was intrigued when Klement asked if they had heard of the Living Building Challenge.

“As we’ve grown older, we find ourselves paying more attention to what’s in front of us, what’s the next opportunity,” said Tom, who is semi-retired. “And that’s how it’s dovetailed with retirement.”

The house, which took a team of about 20 people to make it a reality, has a geothermal heating system, radiant in-floor heat, energy-efficient walls with the best moisture performance possible and passive ventilation.

It’s built so efficiently that the Burbecks only turned their air conditioning on once last summer. A 37-foot tower at the front entrance helps hot air escape.

“Wind studies showed us how wind comes across the site,” said Klement. “So as the wind comes to the site, it comes in the lower windows and moves through the house. Warm air naturally rises so it finds it way into that tower vestibule and goes up the chimney.”

And in the winter, the concrete floors can soak up so much sun energy which they in turn re-radiate, that the couple doesn’t have to turn on the geothermal heating (which involves a series of pipes with hot water beneath the floor).

“During the winter when it’s zero degrees outside, there are times we have to open windows,” said Tom.

The couple declined to say how much the house cost to build. They estimate that building with green materials added a roughly 30 percent premium to the cost.

The Tuscan aesthetic, meanwhile, also was about longevity. Marti and Tom wanted a look that, like its materials, would stand the test of time.

“How do you figure out what’s going to be attractive in 200 years?” Tom said. “We looked into the past.”

With the interior now complete, Tom and Marti are slowly turning their attention to their farm. They’re building a series of cisterns and swales to collect and store water on their property for the crops they’ll eventually grow. Fruit trees have been planted and they’ll eventually also have chickens, bees and possibly goats.

“The idea is to grow food on every spot you can,” said Marti.

Burh Becc, meanwhile, is already having an effect on the outside world. Some manufacturers of certain housing materials tweaked their formulas to make them more eco-friendly after being asked about ingredients during the vetting process.

“It really is an advocacy program,” said Marti.

“A Grand Finale” celebration will be held with free tours from 8 a.m.-5 p.m. Sunday to show off Burh Becc at Beacon Springs in Ann Arbor. Preregistration is required. Go to eventbrite.com and search for “Visible Green Home Burh Becc.” Or call (734) 769-9784.