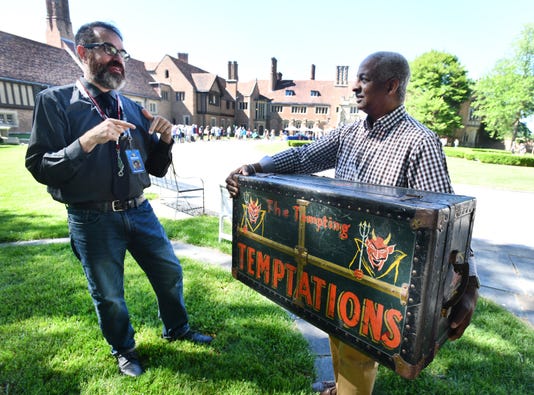 Appraiser Gary Piattoni talks with Eric of Wayne County with a foot locker believed to be owned by the Temptations during filming for the "Antiques Roadshow" on the grounds of Meadowbrook Hall. Filming for the "Antiques Roadshow" comes to the grounds of Meadow Brook Hall, in Rochester, Michigan on June 14, 2018.(Photo: Daniel Mears, The Detroit News)Buy Photo

"Antiques Roadshow" fans, set your DVRs for Jan. 7, 14 and 21: That's when the episodes filmed in June will air on Detroit Public Television.

In a press release issued Tuesday, "Antiques Roadshow" producers said the segments at Rochester's Meadow Brook Hall, a National Historic Landmark, will actually kick off Season 23 for the beloved show.

More than 2,500 people won free tickets to have their antiques, family heirlooms and other goodies appraised on June 14 by experts in a variety of categories and possibly have their chance to be on TV. Approximately 6,000 items were appraised.

The new season for "Antiques Roadshow" will reflect a different format for the show, which is normally filmed at convention centers.

"The convention centers, they worked (for filming)," said executive producer Marsha Bemko during the show's visit to Meadow Brook, the former home of auto heiress Matilda Dodge Wilson and second husband Alfred Wilson. "They're very efficient. There's an efficiency to the day, but there's something you don't get. I compare it to going from a three-ring circus to a fair. This is such a friendlier environment. ... We've never had a prettier show."