When Sondra Hoffman studied textiles at Eastern Michigan University (EMU), she purchased her yarn from Forma, a shop in Whitmore Lake that "specialize(s) in yarn and equipment for handweaving, knitting, spinning and dyeing." 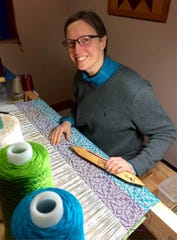 When Sondra Hoffman studied textiles at Eastern Michigan University (EMU), she purchased her yarn from Forma, a shop in Whitmore Lake that "specialize(s) in yarn and equipment for handweaving, knitting, spinning and dyeing."

Currently working as a high school art teacher, Hoffman earned both a bachelor of fine arts (1983) and a masters degree in textiles (1999) from EMU, and for the past 10 years, she's been Forma's only weaving instructor, following in the footsteps of others.

As a weaving enthusiast, Hoffman said, "I love the patterns and magic of one thread at a time that makes something that has never been made before."

Charles Botero, the owner of Forma, opened the fiber art studio in 1972 "with the franchise of LeClerc." And, after nearly 50 years, Botero, who lives in Whitmore Lake, still actively runs the business, sometimes getting assistance from Hoffman and a few of her former weaving students.

Hoffman, said, "He started this business because he wanted to do something that he and his former wife could do together. When the woman that had the LeClerc franchise in Northville moved out of state, he thought he would apply to get that franchise, and he did."

"(Botero) sells to all the universities -- Wayne State, CCS (College for Creative Studies), Eastern Michigan, (and) art schools," said Hoffman. "Instructors either bring or direct their students there -- some do both."

And, although weaving remains a popular fiber art, one will find there aren't as many places around to learn or purchase materials, as in the past.

"The world of weaving has really changed in these years. At the beginning, Charles had salesmen come to him with cases of samples for him to order from. There were many mills and weaving studios in the country," continued Hoffman. "Now Charles has to find yarn sources and that is not easy because there are not many suppliers, and many of the ones that are around want the buyers to order in large quantities, which is not possible for small shops. There are also very few places to learn to weave."

Located at 111 Northfield Church in Whitmore Lake, Forma offers customers a wide assortment of yarns in "a full range of colors" in cotton, wool, rayon, flax, hemp, and some that are hand-dyed. Except for Brown Sheep and those that are hand-dyed, all the other yarns are sold by the cone.

Weaving and other needleart enthusiasts travel from near and far to take advantage of the well-stocked shop, described on its website as "sort of out of the way." But,  finding Forma is "pretty straight forward," even though Hoffman said the driveway is "half a mile long."

Despite being in a remote area, Hoffman stated, "We have people who drive from the west coast, and people who come up from Ohio. It's pretty far-reaching, but it's really word of mouth, and I think because we have the website (forma-fiberarts.com), and I post stuff on Facebook for him, we have some kind of outreach, and all the weaving and fiber guilds know about us." 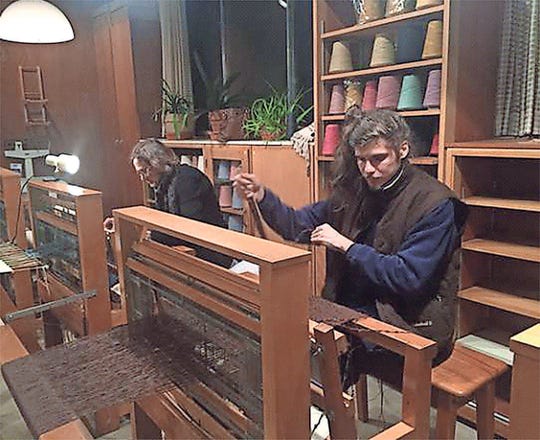 The weaving classes are eight weeks long, and $155 each. Classes are held every Thursday, from 7-9:30 p.m., and limited to 10 students, one per floor loom.  And, whenever Botero is in the studio, students are welcome to come in and work on their project anytime.

"Men come and all ages come in to weave. The youngest student, (so far), was 12, and then I have all the way up," said Hoffman. "There's usually one man per class, sometimes two.

"Classes are always changing. I always have a beginner class, and I have students sign up for classes they'd like to take, so the ones I get the most names for are the ones I start with." The double-weave will be the next class, and it's set to begin the first Thursday in February.

Detroit News columnist Jocelynn Brown is a longtime Metro Detroit crafter. You can reach her at (313) 222-2150, jbrown@detroitnews.com or facebook.com/DetroitNewsHandmade.