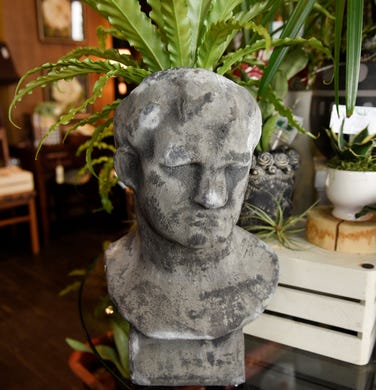 Talk about head games. Head-shaped planters are hot these days and they can display plants indoors or outdoors. At Southern Green inside Tootie and Tallulah in downtown Berkley, a cement bust planter makes a statement with a Bird's Nest Fern in it. Clarence Tabb Jr., The Detroit News
Fullscreen 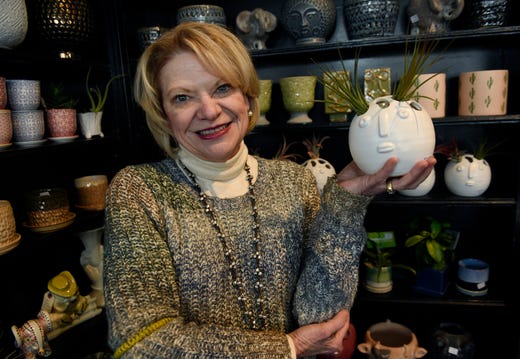 When Kelly Green, 59, owner of Southern Green, first got into the plant business about seven years ago, head-shaped planters were very hard to find. They've grown significantly in popularity, she says. Clarence Tabb Jr., The Detroit News
Fullscreen

One popular planter at Southern Green is this speckled ceramic one. Inside is a Calathea plant, which features patterned, colorful foliage. Clarence Tabb Jr., The Detroit News
Fullscreen 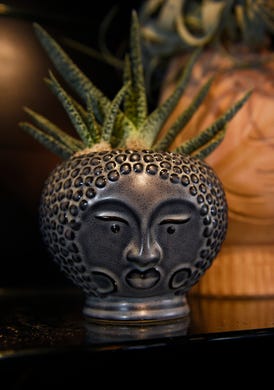 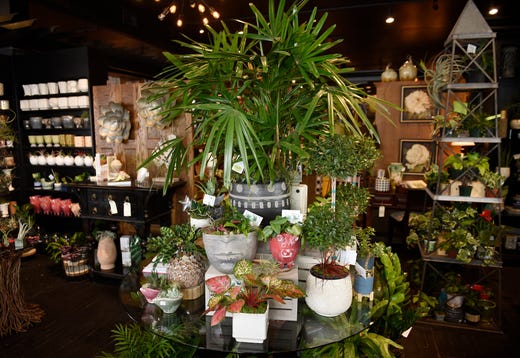 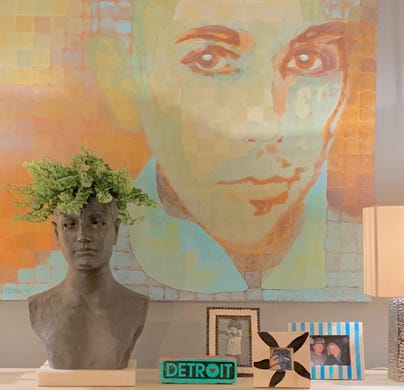 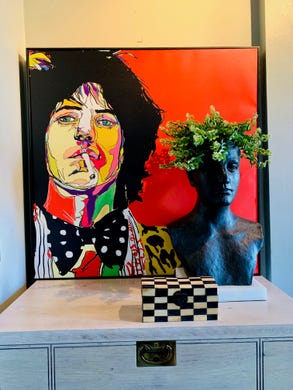 Derian said this cast iron planter with a marble base is by Global Views and was given to her and her husband, Evan, by a friend. Inside it is a Twister Lipstick Plant from Lowe's. The planter is displayed in front of a portrait Evan did of The Rolling Stones' Keith Richards. "It's cast iron, so it's heavy, so we only move that one once a year, if at all," said Ekstrom Derian. "He usually greets guests near the front door." Tamela Ekstrom Derian
Fullscreen 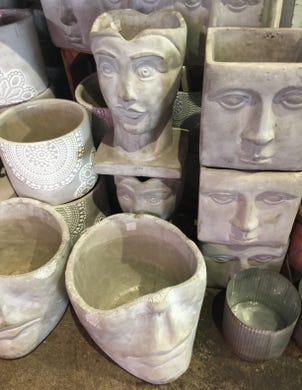 Round or square, half a face or a full face, Blumz by JRDesigns in Ferndale has a range of head planters. Maureen Feighan
Fullscreen 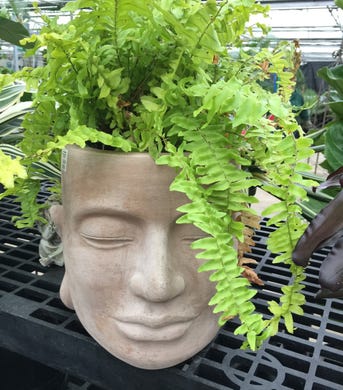 This large head planter is one of many at Telly's Greenhouse in Troy. "They're classy and they make a statement and there's a connection to the earth," said Telly's owner George Papadelis. Maureen Feighan
Fullscreen 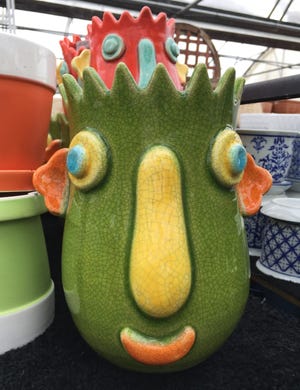 This cartooni-like planter is a popular one at Telly's, said Papadelis. Maureen Feighan
Fullscreen 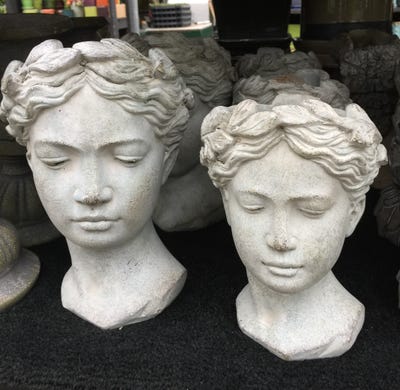 A Calathea with bold, patterned foilage creates a warrior out of this planter at Telly's. Price range from $15 to $70. All of the head planters are ceramic, terra cotta or fiber clay. Maureen Feighan
Fullscreen 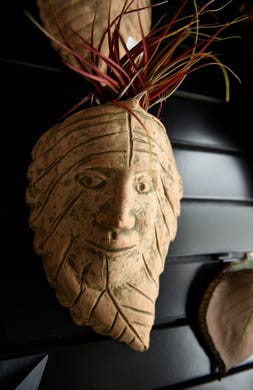 This planter at Southern Green mounts to a wall. Clarence Tabb Jr., The Detroit News
Fullscreen 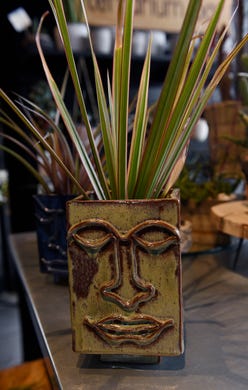 Visit nearly any garden shop these days and you may feel like you’re being watched. Head planters have a way of making you feel that way.

And head planters – head-shaped planters made from clay, terra cotta or cement with space in the skull for a plant – are very hot. They’re part home decor, part plant, and all fun. And even in the dog days of winter, they’re a great way to add some green to your space. 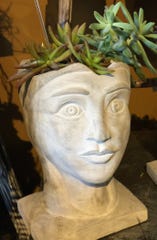 Head planters, including this one made out of cement, are a fun way to display plants these days. (Photo: Maureen Feighan)

Green sells a variety of head-shaped planters, both big and small, that range in price from $16 for a small one with space for a Tillandsia air plant to a large one that sells for $99.

One of Green’s main suppliers is a company that specializes in handmade products from South and Central America.

But when she got into the plant business about seven years ago, Green, a former school administrator, said head planters were hard to find. So hard, in fact, that she asked a local artist, ceramicist Cheryl English, to make some.

“I approached her and said ‘I’m trying to do something unique,’” said Green.

Today, Green still carries the square-shaped planters with faces that English create, along with a wide variety of planters in between.

“It makes people happy,” she said.

Tamela Ekstrom Derian, the broker and owner of Detroit HAVEN Real Estate and Design, has loved head planters for years, long before they were popular. When she searched online to find one about a decade ago, she struggled.

"I found one lady that hand-made them out of cement," remembers Ekstrom Derian. "You could choose the sand or gray color. She shipped them in crates. I thought they were so unique that I toyed with the idea of making and selling them myself."

Years later, Ekstrom and her husband, Evan, have amassed an entire collection of head planters. They have at least seven, including two large concrete ones. One is from a Texas-based company, Global Views; another is from Wayfair.com; several are from Telly's Greenhouse in Troy; and another is from the Detroit Institute of Arts.

"We used them as the table centerpieces at our wedding with different plants, candles, moss and wine bottles filled with flowers," said Ekstrom Derian. "I think my husband and I both love them because we are both portrait artists."

Ekstrom says there's no question head planters are more popular than they used to be. And she already has her eye on a few more at Blumz by JR Designs in Ferndale.

"I have an addiction," jokes Ekstrom.

What's also fun about head planters is they don't have to stay indoors, says Green. They can be moved outdoors once warmer weather arrives, she says.

But whether inside or out, Green says it's important to ask yourself a few questions to determine the right location and the right plant.

When it comes to picking the right plant for a head planter, Green suggests picking one "that completes the face," she says. You want hardy, architectural plants, she says.

"It's like the hair. What do you want the hair to look like? And I always want it to be whimsical and fun and hardy. I want it to be a home accessory that will last a long time."

It's about making it all one piece, she says. "It's not a head with a plant in it."

Some good options, Green recommends, are a Sansaveria, also known as a snake plant, with spiky hardy leaves that will requires minimal watering. Another good option is a Xerographica, a type of air plant with curly leaves.

And the Calathea is another fun option, she says. Green has one in a large blue ceramic head planter that's been a popular item in her store.  At night, it's a prayer plant so its leave cluster all together, straight up.

One friend who has it "said 'Oh no, our guard is going for the night,'" Green said. "'We're going lose our night watchman.'"

Not every plant will look right in certain planters, so "there's a conscious step of picking a plant to match a container," Green says.

"The more organic it looks, the more interesting it will be in a pot," she says.

And Green believes there's no such thing as a person with a black thumb.

"You have to match the plant you have with your own personal needs and preference," she said. "Do you ignore plants? Then we need to get you something that you can let dry out. Do you have a house with low light? There are lots of plants (that thrive) with low light, but not a succulent."

So if you're eager for spring and the weather isn't cooperating, try a head planter. Before winter ends, it could help get your own head in the right place.