Keep pets away from gardens to prevent food-borne illness

Keep pets away from gardens to prevent food-borne illness

This Aug. 24, 2018 photo taken at the Bayview Farmers Market near Langley, Wash., shows fresh produce being laid out for purchase. Many farmers markets across the nation have banned dogs from their craft, food and produce displays, citing breakage, safety and sanitary concerns. (Photo: Dean Fosdick / AP)

Animal waste tainting fresh produce is one of the major causes of food-borne ailments. So farmers markets and pick-your-own growers who fear fecal contamination are increasingly guarded about tolerating pets near their edibles.

Home gardeners should be cautious, too.

Many of the pathogens affecting food safety come from the intestinal systems of animals, said Diane Wright Hirsch, senior Extension educator with the University of Connecticut.

“Whether human, dog, cat, cow or deer – all animals can be the source of Salmonella, E. coli, parasites and other disease-causing microbes associated with food-borne illness,” Hirsch said. 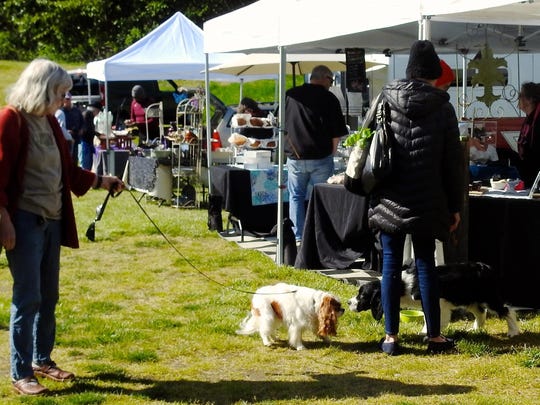 This April 27, 2019 photo shows two dogs getting acquainted at the Bayview Farmers Market near Langley, Wash. Bayview, like many farmers markets across the nation, has posted strict rules aimed at preventing dogs from approaching their craft, food and produce displays, citing breakage, safety and sanitary concerns. (Photo: Dean Fosdick / AP)

E. coli outbreaks have been traced to meat, poultry and fresh produce, particularly lettuce. Salmonella has been detected in eggs, poultry, pork, sprouts, cucumbers and cantaloupe, while Listeria monocytogenes can be found in all types of food, including processed meats, cheese, apples and frozen vegetables, according to a University of Connecticut fact sheet.

All are serious ailments, particularly for the young and the elderly.

It’s vital to keep animal and poultry feces out of residential and community gardens and well away from farmers markets and roadside food stands.

“I have seen a dog pee on the corner of a farmers market table, and another place his head near the produce (where has that mouth been?),” Hirsch said in an email.

“Farmers are working hard to produce safe fruits and vegetables – why let someone’s dog ruin it all with a lick, a squat or a lift of the leg?” she said.

Many large farmers markets have banned dogs from their craft, food and produce displays, citing breakage, safety and sanitary concerns.

The Olney (Maryland) Farmers and Artists Market struggled with the issue for years before deciding to exclude dogs, said Janet Terry, Olney’s president.

This April 27, 2019 photo taken at the entrance to Bayview Farmers Market near Langley, Wash., shows a set of rules regulating dog behavior around its craft, food and produce displays. (Photo: Dean Fosdick / AP)

“It would be horrifying to think what would happen if dog feces were found on our site. It also would be horrifying if a dog got off a leash and mauled a child,” Terry said. “This happened at a large market in Baltimore several years ago. We just don’t want to take any risks.”

Some dog owners were angry about the pet ban, Terry said. “The good news is now, after 11 seasons, most of the complaining has stopped. We believe we have done the right thing.”

Some suggestions from University of Connecticut Extension aimed at minimizing food safety threats:

– Use potable water when watering your food plants. Do not use rain barrels or other open water sources.

– Always wash hands prior to harvesting, and don’t harvest when sick.

– Use composted manure that has been managed to destroy potential pathogens, or wait 120 days before harvesting before applying untreated manure or compost.

– Locate your garden away from contamination sources, and protect it from chickens, wildlife and pets.

There is little you can do if animals defecate on or near your edibles, Hirsch said.

“If harvestable or close-to-harvestable fruits or vegetables are affected, do not harvest, do not eat,” she said. “It is just too risky.”