Early fall is prime time for dahlias. Two farmers share their stores of growing dahlias and offer tips for growing your own 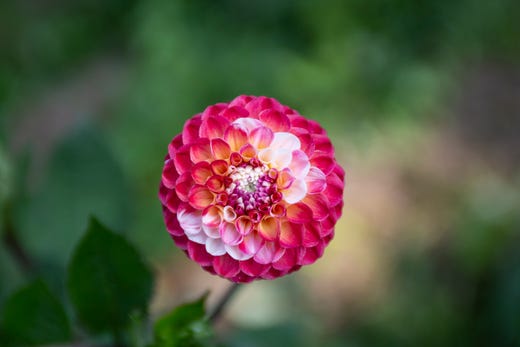 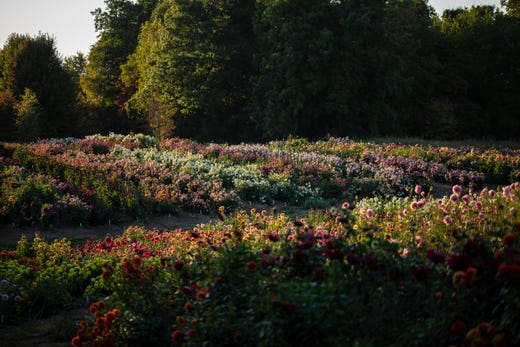 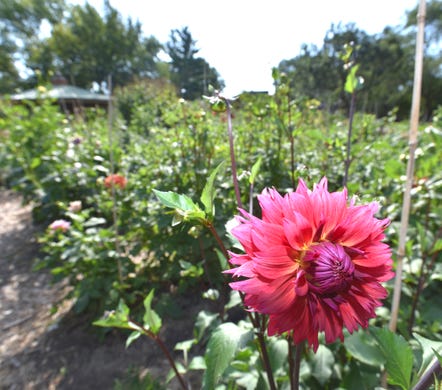 At Detroit Abloom, an organic flower farm and sanctuary garden  that has bloomed on what was once vacant land, dahlias continue to bloom. Todd McInturf, The Detroit News
Fullscreen 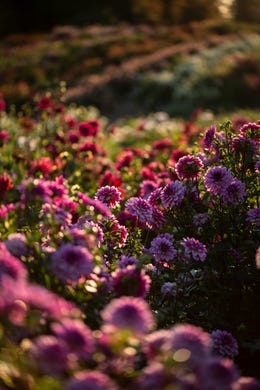 Dahlias bloom as far as the eye can see at Summer Dreams Farm. Heather Saunders
Fullscreen 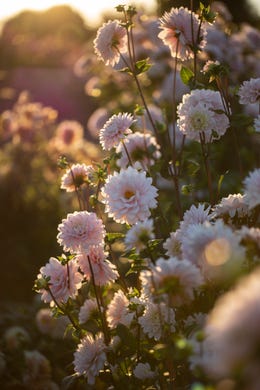 Genovese, whose biggest customer is Plum Market, says many of his flowers are used for weddings or high-end corporate events. For weddings, the most popular dahlia hues are burgundy, blush, cream and white. Heather Saunders
Fullscreen 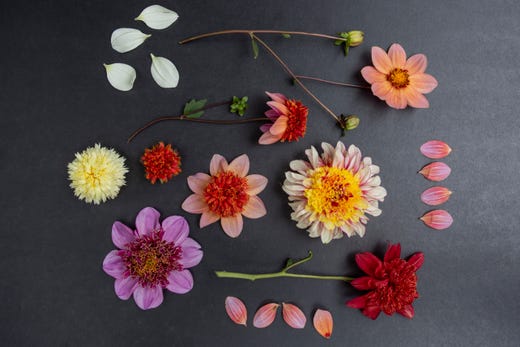 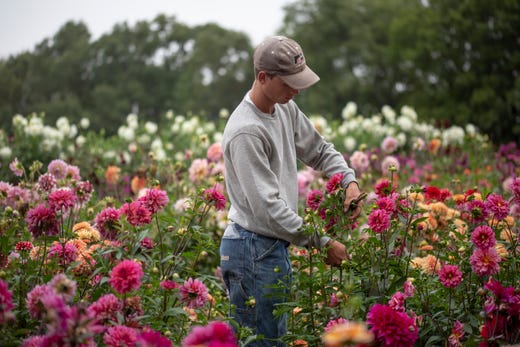 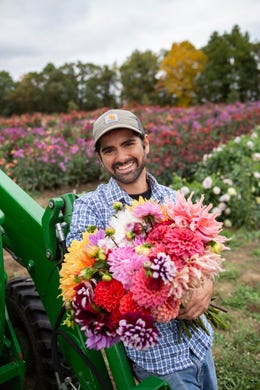 Genovese got his start with dahlias after another Michigan dahila farm mailed his parents some tubers. "Those few dahlias grew into a passion for me, I had never seen anything like them," said Genovese on his farm's website. Heather Saunders
Fullscreen 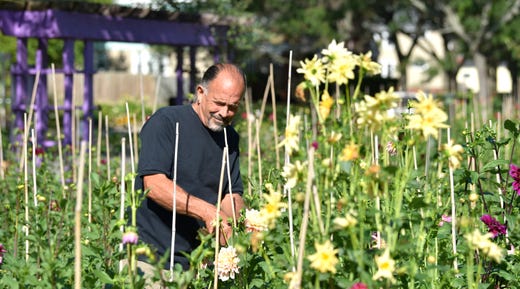 Tom Milano of Detroit Abloom cuts off dried-up dahlias so other flowers can grow larger on the plants. The garden is open to the public. Todd McInturf, The Detroit News
Fullscreen 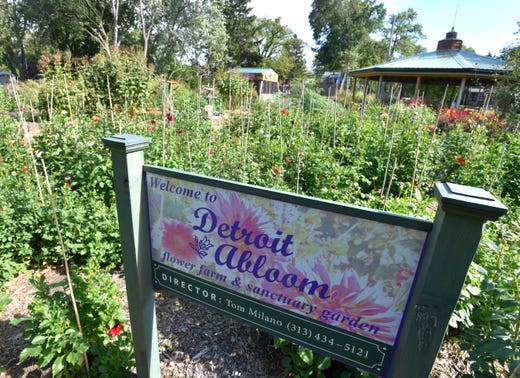 Detroit Abloom, which also includes a sanctuary garden and a shelter, sits on 15 lots on Manistique and Ashland in Detroit's Jefferson-Chalmers neighborhood. The nonprofit bought the lots from the Detroit Land Bank Authority.  Todd McInturf, The Detroit News
Fullscreen 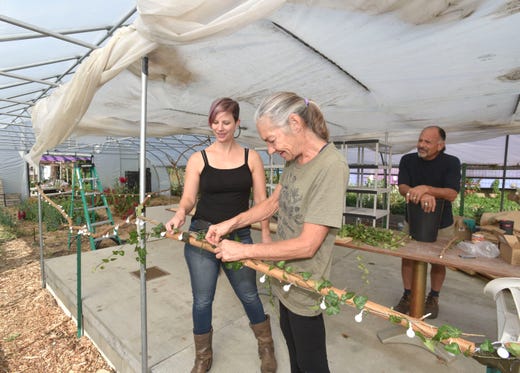 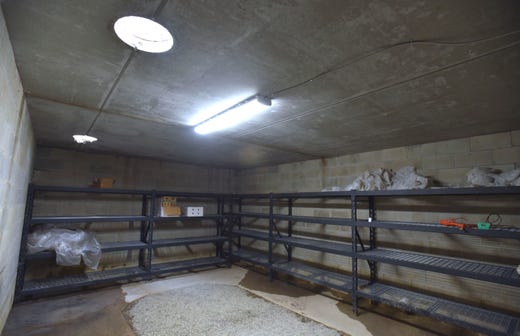 Below the hoophouse is a custom made root cellar used to overwinter dahlia tubers where they become dormant until are divided and planted in the spring. Tubers have to be kept at a certain temperature with a certain level of humidity. Todd McInturf, The Detroit News
Fullscreen 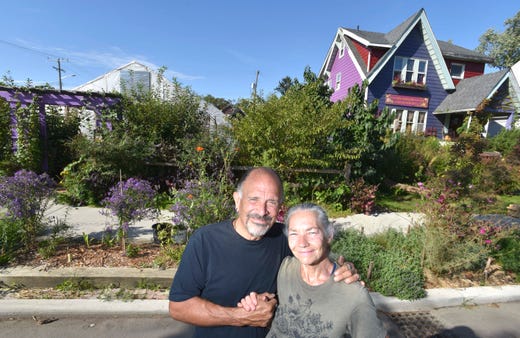 Weigandt, right, was the first to introduce dahlias to Milano. One look on his face and she knew he was hooked.  Todd McInturf, The Detroit News
Fullscreen 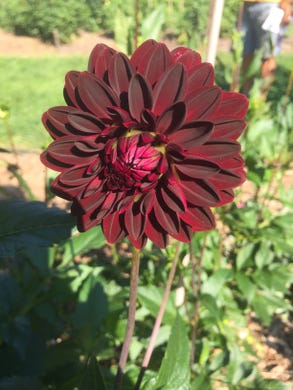 Correction: This story has been updated to correct the spelling of Tom Milano's last name.

In early September last year, a woman approached farmer Michael Genovese in the fields of his dahlia farm in northern Oakland County during its annual open house, one of the only days of the year that the gates are opened to the public. Tears washed down her face.

“I just wanted to tell you that this is the most beautiful place I’ve ever been,” the woman said.

More: When it comes to growing dahlias, full sun and well-drained soil are key

Dahlias, a gorgeous hardy flower that comes in thousands of varieties and sizes, can evoke that kind of emotion in people.

Known for their beauty and structure, early fall is their time to shine after they start blooming in late summer. Genovese said the allure is so strong for dahlias there’s even a website for dahlia addicts.

Walking through the fields of his farm in early September, Genovese — whose farm is now one of the largest dahlia farms in the Midwest, growing roughly 250 different varieties on 5 acres — said the experience at his open house last year was an affirmation in several ways. 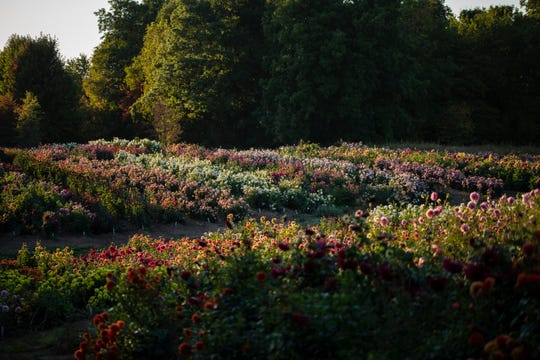 It affirmed his decision to leave corporate America to follow his dream of starting his own farm five years ago. And it affirmed why he sometimes spends 100 hours a week working in the fields.

To be able to create a space that emotionally moves people who visit it is special, he says. And dahlias have that kind of impact.

“When I was working my desk job there were times that I enjoyed what I did but you never felt you were having this kind of impact on people,” said Genovese. “There’s something special, very special (about it) – to slow down and appreciate that.”

Later this fall, Genovese — who will be at the Rochester Farmers’ Market one final time this weekend — and his team will cut the fields down, dig out the tubers and start selling them on the farm’s website. They’ll be delivered in early spring. 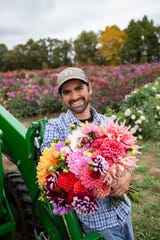 Michael Genovese stands in the fields of his Summer Dreams Farms, a dahlia farm in northern Oakland County. Established in 2015, it's now one of the biggest dahlia farms in the Midwest. (Photo: Heather Saunders)

When it comes to growing your own dahlias, Genovese says you really only need three things: full sun, well-drained soil and a stake after they go into the ground because they’re prone to flopping over.

“But if you can do those three things, they’re not that complicated,” said Genovese.

Detroit Abloom, an organic cut flower farm in the city’s Jefferson-Chalmers neighborhood, also grows a wide range of dahlias, more than 100 varieties, which they include in their bouquet subscription service, especially in the fall.

Tom Milano, the head of Detroit Abloom, admits he’s been hooked on dahlias ever since his partner, Nancy Weingandt, introduced him to them. One look and she knew he was smitten.

“I could see the look on his face,” said Weingandt.

Today, dahlias in a range of colors and hues soak up the sun on what were once vacant house lots on Manistique. Detroit Abloom celebrated the dahlias with a festival in late September. Milano often warns people that once they give dahlias a try they’ll become “dahlia aficionados.”

“And then its all over!” he jokes. “When you aren’t appreciating dahlias during their season, during their off season you think about when you’re going to see them again, blooming so beautifully.”

Dahlias are native to central Mexico and date all the way back to the Aztecs, who used to eat the tubers for nourishment.

Milano says today there are 59,000 varieties of modern dahlia hybrids, which were derived from only two or three species that made their way from Mexico to Spain in the 18th century.

For his part, Genovese didn’t even know what dahlias were until a family friend sent his parents some tubers. What he did know is that he wanted to farm. He grew up on his parents’ farm, Candy Cane Christmas Tree Farm, also in Oxford.

With the tubers -- sent from Janet Koop, whose family ran Hamilton Dahlia Farm, which at one time was one of the largest dahlia farms in the country -- Genovese found a passion.

“I had never seen anything like them,” said Genovese on his farm’s website. “Over the next few years as those few plants multiplied so did my interest.”

On an overcast day in early September, Genovese’s fields were filled with blooming dahlias. His biggest customer is Plum Market, and most of his flowers go to weddings or high-end corporate events. He said the most popular dahlia colors for weddings are burgundy, blush, cream and white.

“Fifty percent of what I sell are those colors,” said Genovese, who this week also hosted the U.S. Secretary of Agriculture at his farm.

Heather Saunders, a local photographer who met Genovese through a florist friend in 2015, has followed Genovese’s journey as a dahlia farmer since the beginning. Saunders said she’d seen dahlias before but “never shining on their own” as they do at Genovese’s farm.

“I was amazed by all the variance in tone, shape and structure,” said Saunders, who regularly photographs Genovese’s fields. “...Here we are 5 seasons later and I am still in awe, of what Michael has accomplished and the stunning beauty of these blooms.” 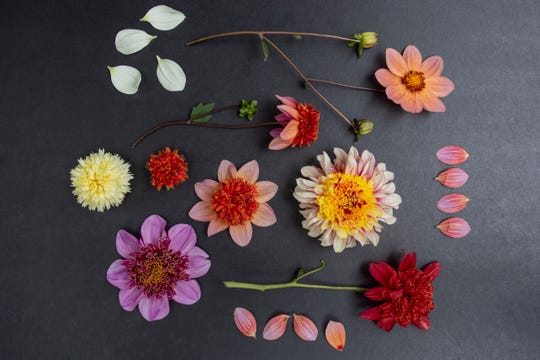 Eventually Genovese would like to create a retail operation at his farm to sell cut flowers. He also wants to host more events and public workshops, especially for kids. More than 1,000 people attended this fall’s open house in September.

And he wants to draw attention to American grown flowers like his dahlias. Eighty percent of the flowers sold in the U.S. aren’t grown here, he said.

People are so disconnected from nature these days but the farm “puts a smile on their face,” he said. “...This brings out so much passion and joy.”

At Detroit Abloom, meanwhile, a root cellar under a hoop house next to Molina’s and Weigandt’s home in Detroit’s Jefferson-Chalmers neighborhood is ground zero for their dahlia operation. Built on land where a burned down house stood for eight years until Molina was finally able to buy the lot, the cellar is where Milano and Weingandt store their dahlia tubers, which they also sell for $6 each, for the winter. 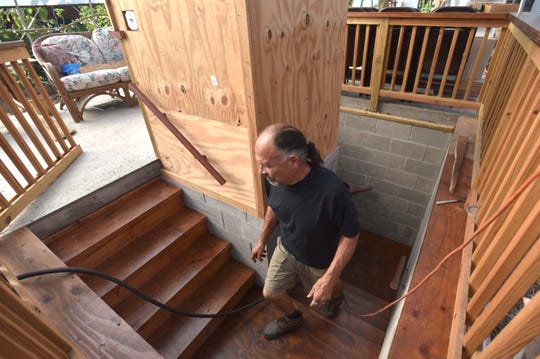 Custom built, the cellar has a constant temperature of between 40 and 50 degrees with 80 to 90 percent humidity, ideal for dahlia tubers. Shelves line the walls, which will eventually be filled with tubers. Milano says they even often a “boarding service” for customers to keep their tubers “because we have the right conditions.”

Milano, a former Hare  Krishna who also specializes in creating butterfly and sanctuary gardens, sees his dahlias and all the plants Detroit Abloom grows as so much more than plants. They’re a way to connect people and bring down barriers.

“I really believe that Detroit is poised to inspire the world,” said Milano.