The small marble bust is a good example of the kinds of pieces that Italy exported through the years for the tourist trade.

“It was my parents’ and they got it at an estateabout 1970,” Jean Norgrove told DuMouchelle appraiser Joelle Del Rose at a recent Trash or Treasure appraisal day held at the downtown auction house and gallery. “I think they paid about $5 for it. It’s been in the family ever since.”

Del Rose identified the small marble sculpture as a bust of Beatrice, Dante’s would-be lover. Beatrice, aka Beatrice Portinari, plays a major role in the Italian poet Dante’s life and work, she said. According to brittanica.com, “Beatrice, the woman to whom the great Italian poet Dante dedicated most of his poetry and almost all of his life, from his first sight of her at the age of nine (“from that time forward, Love quite governed my soul”) through his glorification of her in la divina commedia, completed 40 years later.” 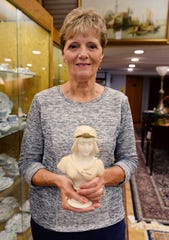 The small marble bust is a good example of the kinds of pieces that Italy exported through the years for the tourist trade, Del Rose explained. “It was a souvenir, but a more substantial and expensive one,” she said, adding that some were brought home as mementos of a grand tour of Europe and that the workmanship was a testament to the beautiful and long-standing tradition of Italian marble carving. Many Italian American families had similar busts in their homes.

Unfortunately, the appraiser added, the market is not as good as it used to be for Italian marble sculpture. “It was a lot stronger in the 1990s but has cooled off since then,” she explained. She knows it is an example of Italian craftsmanship by the style but also because “Made in Italy” is carved into the back. The fact that the words are in English are further proof that it was destined for a market outside its country of origin, she added.

Del Rose identified the style as art nouveau, adding that it would probably date to approximately 1910-1925.  In the current market, it would sell at auction for approximately $100, she said.

“If you only paid $5 for it, that’s quite a good deal,” the appraiser told Norgrove, who added that the piece will probably stay in the family. “My daughter would like it, so I think it has a home,” she added.

Do you have an object you would like to know more about? Send a photo and description that includes how you acquired the object to: The Detroit News, Trash or Treasure?, 160 W. Fort St., Detroit, MI 48226. Include your name and daytime telephone number. You may also send your photo and description to trashortreas@aol.com. If chosen you’ll need to bring the items to an appraisal session. Letters are edited for style and clarity. Photos cannot be returned.