“In Pursuit of Fashion,” is a breathtaking and groundbreaking exhibition currently on view at the Metropolitan Museum of Art

“Never heard of her,” commented a woman recently while reading the background information displayed as part of In Pursuit of Fashion: The Sandy Schreier Collection,” the breathtaking and groundbreaking exhibition currently on view at the Metropolitan Museum of Art. She may not be a household name – yet -- but American collector (and Detroit native) Sandy Schreier is well-known among fashion historians, enthusiasts and both museum and industry insiders. 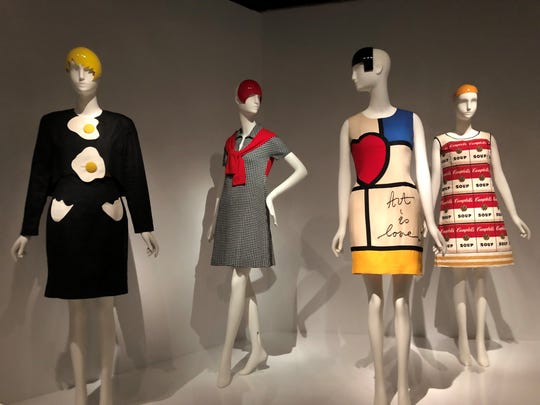 "In Pursuit of Fashion,” is a groundbreaking exhibition currently on view at the Metropolitan Museum of Art by local collector Sandy Schreier . (Photo: Claire Zimmeth)

In the exhibition overview, the Met credits her as “a pioneering collector, who over the course of more than half a century assembled one of the finest private fashion collections in the United States. The show explores how Schreier amassed a trove of twentieth-century French and American couture and ready-to-wear, not as a wardrobe, but in appreciation of this form of creative expression.” Since it opened in November, the 80-piece exhibition has drawn rave reviews. “A remarkable treasury of fashion history,” according to Vogue, it’s “a delight to discover,” says the New York Times,” and “as good as a Willy Wonka factory for fashion buffs,” according to Fashionista.

Promised to the museum in honor of its 150th anniversary being celebrated this year, the pieces are part of a 165-piece bequest and display a fascinating range of eras and styles. It’s well worth a stop if you’re lucky enough to be in New York between now and its May 17th closing date.

“Beginning in the mid-20th century, a time when few individuals or even museums considered modern fashion as an art form, she amassed a group of objects that together represent the defining motifs of 20th-century fashion and the signature achievements of the field’s most innovative designers,”  exhibition placards explain. 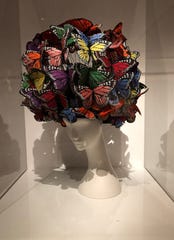 A 2003 hat by Philip Treacy is among more recent (and creative) pieces from the Schreier collection. (Photo: Claire Zimmeth)

Schreier credits her interest in the genre to the Detroit specialty store Russeks, where her father worked in the 1930s and ‘40s. There she was exposed to Vogue, Harper’s Bazaar and other leading magazines, and received early acquisitions from store clients as gifts while still a young girl. She also credits trips to the DIA for spurring her study of and interest in historic costume and textiles. Later, she sought out examples to add to her collection from the wardrobes of fashionable and well-known women, including Elizabeth Parke Firestone.

Vintage fashion enthusiasts (I include myself in this category) will find themselves drooling over couture stars such as Dior, Balmain and Chanel while learning about lesser-known designers such as Jessie Franklin Turner (whose 1939 peach tea gown was one of my favorites) and Roberto Rojas, whose 1967 creation was worn by Twiggy. I was awestruck by the multiple printed velvet pieces by Spanish master Fortuny, which drew on Coptic, Greek and medieval and Renaissance European motifs and by the fluid pleats of the silk “Delphos” dress, circa 1920s-1930s.

Lesser known designers include a 1913 Maison Margaine-LaCroix pale silk and satin evening dress, a 1923 evening gown by short-lived French design house Madeleine & Madeleine, on view at the entrance to the exhibition. Rare, it was acquired by Schreier in the 1960s and reflects the discovery of Pharoah Tutankhamun’s tomb the year before, an illustration of how fashion has long reflected current events. Pieces span the century, from early gowns to the later disposable “Souper” paper dress made by Campbell Soup Co. in 1966 and a humorous Surrealist-inspired 1990s “Breakfast” suit by Christian Francis Roth and even a 2008 piece by Alexander McQueen.

Even if she was relatively unknown by some until now, no doubt this exhibition will move Schreier and her amazing collection(of which the exhibition is just a small part) firmly into the spotlight.

You can reach Khristi Zimmtrashortreas@aol.com