Signed Yanni Posnakoff, it’s the work of a Greek artist who was born in 1933, said the appraiser

“I was always drawn to it,” Maggie Klein confessed to DuMouchelle appraiser Joelle Del Rose about the piece of art she recently brought in for appraisal, adding that it was something she purchased when she worked for the general manager at the Somerset Inn, which had an art gallery in the 1970s.

Signed Yanni Posnakoff, it’s the work of a Greek artist, said the appraiser. “He’s relatively well known in Greece and other parts of the country,” she said, adding that he had recently died. 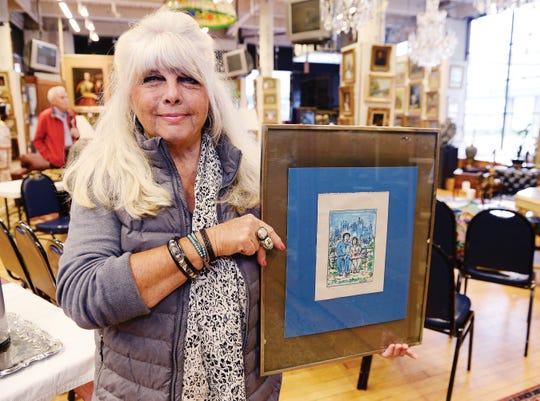 More information about the artist and some fascinating background was found on the website of the American Visionary Art Museum in Baltimore (avam.org).

“Yanni Posnakoff was born in Thessaloniki, Greece in 1933. He witnessed the wartime murder of his Greek mother and Bulgarian father. Unusually bright, Posnakoff was awarded a Fulbright Scholarship in 1954 and graduated from M.I.T. four years later as a naval architect before moving to Baltimore to work as a maritime engineer and becoming part of the local art community," the website explains.

Next he moved to New York and began exhibiting his work, according to the article. “Obsessed with angels since childhood, he vowed to paint 100,000 angels of all shapes, sizes, and colors during his lifetime. 'I used to see them as a child, even now I see them in some people,'" he said. Posnakoff illustrated two books on the angels, "Children's Letters to God" (a bestseller translated into seven languages) and "Ask Your Angels." Posnakoff opened the Angel Gallery in New York in the late 1980s and embarked on philanthropy. He gave away drawings of angels and fed the homeless, according to avam.org. He returned to Greece -- where he continued to draw angels and reached his goal of 100,000.

Klein said that she had had offers to buy the piece through the years, including a restaurant in New York that collects his work but until now she has resisted selling, adding that the restaurant had offered her thousands of dollars for the work.

Del Rose said that while some works go up when the artist dies, there is limited demand for Posnakoff’s work. Her work “Man and Woman Sitting,” depicts a couple on a New York bench with the city in the background. The bad news, said the appraiser, is that her piece is a print, which makes it less valuable. The numbers 35/250 indicate when it was made in the print process, she said, pointing out the numbers in the lower corner.

Unfortunately, most prints, including Klein's, bring only about $50 to $100 at auction. “There are many original works that only bring between $15 and $40,” she added. The fact that Klein's is an earlier impression wouldn’t raise the value.

Klein said she still likes the work but that she is trying to pare down and may consider selling. “I might put it online, or I might try to contact that restaurant,” she added.

Do you have an object you would like to know more about? Send a photo and description that includes how you acquired the object to: The Detroit News, Trash or Treasure?, 160 W. Fort St., Detroit, MI 48226. Include your name and daytime telephone number. You may also send your photo and description to trashortreas@aol.com. If chosen you’ll need to bring the items to an appraisal session. Letters are edited for style and clarity. Photos cannot be returned.