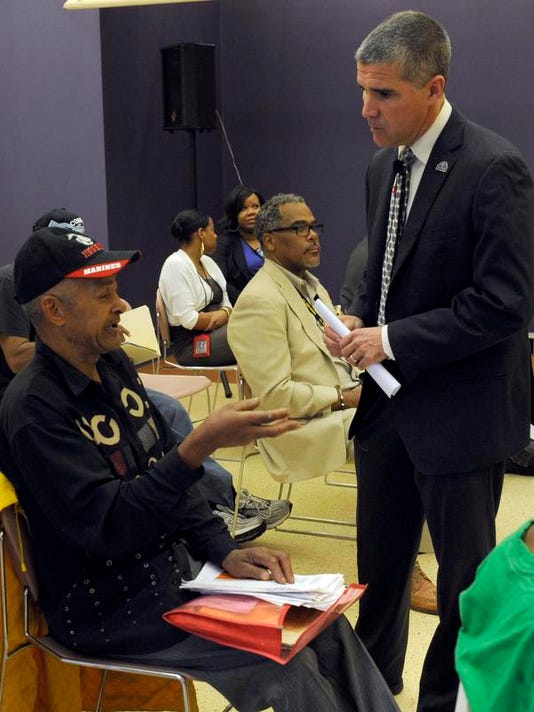 Leonard Henderson, 66, of Detroit talks about his problems with the Veterans Administration with David Leonard, director of the Detroit Regional Office of the VA, on Wednesday. (Photo: Charles V. Tines , Detroit News )

Detroit – — Michigan Veterans Administration facilities have improved service since a VA scandal rocked the nation earlier this year, according to officials who attended a Wednesday town hall meeting in Detroit.

“We care very much, even though I get the impression from some of you that we have not been conveying this,” Leonard told veterans who attended the town hall.

About 15 veterans turned out for Wednesday’s event in Detroit, some carrying stacks of well-thumbed documents from decades-old claims. Most had complaints to air.

About 50 such meetings will take place across the country during the next few weeks in the wake of the furor that erupted in April over allegations that as many as 40 Phoenix veterans died while waiting for medical appointments. An ensuing investigation has grown to include more than 80 VA facilities nationwide.

The town halls were ordered by Veterans Affairs Secretary Bob McDonald shortly after he was appointed in May to replace Eric Shinseki, who resigned amid the widening scandal. The outcry prompted at least three other high-profile resignations, two audits and calls for criminal investigations.

Leonard said case workers were standing by to help resolve the veterans’ problems. The VA staffers on hand appeared to outnumber the veterans who showed up.

“I hope by the end of the day, even if we can’t fix the problems that you have, that you will feel you have been heard,” Leonard said.

Federal officials conducted audits of 216 VA facilities nationwide in May and June, including those in Ann Arbor, Battle Creek, Saginaw, Detroit, Muskegon and several in the Upper Peninsula. The VA Ann Arbor Health System, and clinics in Lansing and Battle Creek, were identified as having problems that warrant return visits from auditors. The follow-up has not yet been scheduled.

“We were one of 120 facilities nationwide (that will get follow-up inspections), which includes nearly every large VA in the country, from Boston to Seattle, that was scheduled for a follow-up visit,” McDivitt said about the Ann Arbor facility.

McDivitt said the problems in Ann Arbor were caused by an antiquated scheduling system dating to the 1980s. That system will be replaced nationwide.

The VA also is moving to a paperless filing system, which will aid efficiency, McDivitt said. This is occurring as recently approved federal legislation promises to provide funding for veterans to obtain health care at community hospitals and clinics outside the VA system.

“I think the whole thing will ultimately be beneficial to veterans,” McDivitt said of the changes, “and that’s why we’re here.”