A study says 3.6 percent of cancers diagnosed in 2012 could be traced to excess weight. 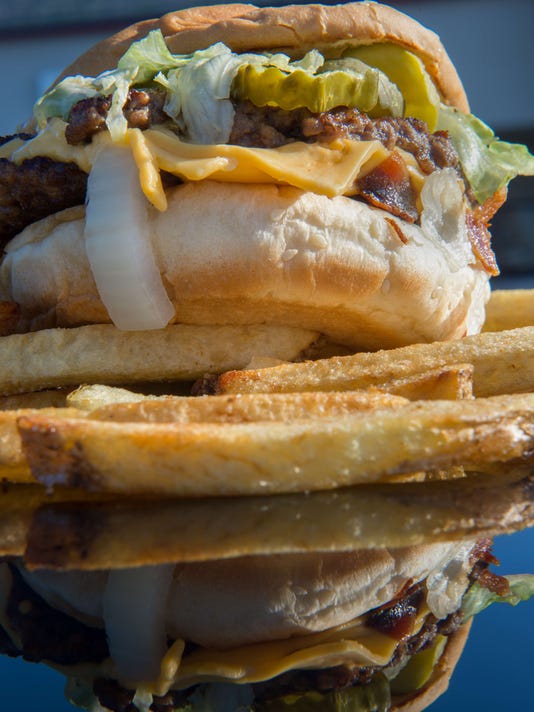 (FILES)This November 20, 2014 file photo shows a bacon cheeseburger with french fries is viewed in Centreville, Virginia. The United States on November 25, 2014 announced sweeping new rules forcing chain restaurants and pizza parlors to publish calorie counts on menus in an attempt to combat the nation's obesity epidemic.The Food and Drug Administration (FDA) said chain restaurants and vending machines with 20 or more locations would be required to provide customers with full nutritional information about the food being sold.Similar rules have already been used for years in several US states and cities, such as California and New York. AFP Photo/Paul J. RichardsPAUL J. RICHARDS/AFP/Getty Images(Photo: PAUL J. RICHARDS / AFP/Getty Images)

Looking for ways to reduce your risk of cancer? Try losing weight.

A new study estimates that 3.6 percent of cancers diagnosed around the world in 2012 could be traced to the excess weight of patients. That works out to 481,000 cases of cancer in adults who were at least 30 years old, according to the report in Lancet Oncology.

The researchers focused on nine types of cancer that have been linked with excess weight in previous studies. These include cancers of the esophagus, colon, rectum, kidney, pancreas, gallbladder, uterus and ovaries, as well as postmenopausal breast cancer. Patients were considered overweight if they had a body mass index of 25 of higher.

The team used data from the GLOBOCAN project to find cancer rates around the world in 2012, sorted by country and gender. They limited their analysis to adults who were 30 or older based on the premise that it takes about 10 years for extra pounds to do the biological damage that increases cancer risk. As such, they used BMI data from 2002 for adults who were at least 20 years old at that time.

The researchers found that being overweight or obese raised cancer risk much more for women than for men. Overall, 5.4 percent of the new cancers in women could be traced to high BMIs, compared with 1.9 percent of new cancers in men. In women, the proportion of cancers linked to excess weight was highest in Barbados (at 12.7 percent), the Czech Republic (12 percent) and Puerto Rico (11.6 percent); in men, the highest rates were seen in the Czech Republic (5.5 percent), Jordan and Argentina (4.5 percent) and the United Kingdom and Malta (4.4 percent).

Postmenopausal breast cancers and uterine cancers accounted for about two-thirds of all new cancers linked to high BMI in women, while cancers of the colon and kidneys made up two-thirds of such cancers in men.

If the global population had not gotten fatter since 1982, roughly 118,000 cancers that were newly diagnosed in 2012 could have been avoided, the researchers calculated. That's almost 1 in 4 cancers that were found that year.

But the world did get fatter. And the situation is getting worse, not better.

"The continuation of current patterns of population weight gain will lead to continuing increases in the future burden of cancer," the researchers concluded.