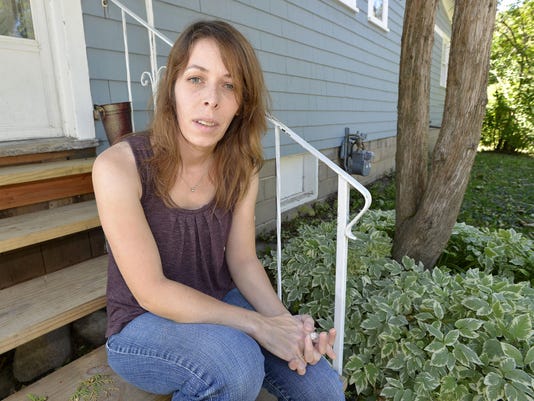 Rebekah Timlin Meddles, who contracted Lyme Disease when she was growing up in Michigan, pauses for a picture on the porch of her new home in Mount Pleasant.(Photo: Dale G. Young / The Detroit News)Buy Photo

Rebekah Meddles remembers childhood summers with trepidation, recalling how she and her siblings roamed the woods near her family’s farm near Farwell in the heart of mid-Michigan’s Clare County.

Recently, Meddles realized she had contracted Lyme disease from numerous tick bites she received during those seemingly idyllic hours outside. Before her diagnosis, her physician wondered if she had everything from mononucleosis to multiple sclerosis to depression.

Now, Meddles is one of the many people, including doctors, infectious-disease researchers and state wildlife experts, spending countless hours and dollars educating themselves and the public about the spread of ticks across Michigan.

“It’s hard because I want (my three sons) to have freedom. But it also can be scary,” Meddles said. “My kids are always the ones out there in socks, shoes and jeans in the woods, even in the middle of summer.”

The ticks that spread Lyme disease — particularly blacklegged ticks — as well as other varieties have increased exponentially over the past five years, affecting Michigan’s wildlife as well as humans who enjoy the state’s parks, forests and campgrounds.

“With certainty and with our research in 2010 and 2014 broad statewide surveys, we found these populations of ticks are moving eastward,” said Erik Foster, a medical entomologist with the Michigan Department of Community Health. “We’ve found blacklegged ticks three blocks from my house in Ingham County. I was really surprised; I didn’t expect to see it so soon.”

Although this year’s tick population anecdotally seems to be in check because of the rainy spring, that has not allayed fears among the Department of Natural Resources and others who study Michigan’s tick population. They predict ticks, especially those that carry the Borrelia burgdorferi bacterium, are likely to swell from the state’s northern and western counties and into Metro Detroit within the next decade.

“They’re here now and they’re expanding. And there’s nothing to stop them as they get into new habitats they can exploit,” Foster said of the adaptable insects.

It’s not known why the tick population is increasing; some observers believe it stems from animal populations shifting or the cutting down of forests to make way for homes, or because of climate change and warmer winters, which aren’t as effective in killing off the tick population.

“People have moved into habitats where ticks have always been; we may be exposing ourselves more,” said Rich Keith, director of Kalamazoo Valley Bird Observatory at Kalamazoo Nature Center, who has conducted surveys of the growing tick population for about 15 years as part of his field work.

Foster, the medical entomologist from the Michigan Department of Community Health, said ticks also hang around long enough to trouble everyone from campers to hunters. The blacklegged tick bothers humans from April through November in some shape or form, Foster noted. That is why education for medical professionals as well as Michigan residents about ticks is key to preventing the spread of Lyme disease.

“Maybe we cannot prevent the spread of ticks. But we can try to prevent human cases from going untreated,” said Foster, who with his colleagues creates continuing education materials for doctors, nurses and others about ticks, tick bites and related diseases in hopes of helping people like Meddles.

In Michigan, the first official reported human case of Lyme disease was in 1985. Cases have now been reported in both the upper and lower peninsulas and in most of Michigan’s 83 counties.

According to the Centers for Disease Control, there were 51 confirmed cases of Lyme disease here in 2007; that jumped to 114 in 2013, the most recent data available.

Celebrity cases such as those of singer Avril Lavigne and actress Ashley Olsen have brought new attention to Lyme disease. However, the state of Michigan says Lyme disease is difficult to diagnose because it can mimic the flu.

Even more challenging is that there is no definitive test for it. Most diagnoses are based on a history of the tick bite, the presence of a circular rash and an examination by a physician for other symptoms.

If bitten, most people can reduce the chance of getting Lyme disease by removing the tick within 36 hours, Foster said. But ticks are very small, he noted, and they are easy to miss unless you are specifically looking for them.

“One of the things we try to do is educate the public,” Foster said.

“Often, summer flu-like illnesses aren’t the flu; the flu happens in the winter. If you’ve got non-specific and vague symptoms, you should see your doctor, especially if you’ve been in an area that’s at high risk.”

For now, the best way to stem tick movement seems to be within human hands. Individuals can use insect repellant, wear clothing embedded with repellants and do thorough checks after coming in from wooded or similar areas.

Homeowners can create larger walkways next to their homes if they live in wooded areas, making it harder for ticks to attach to human hosts. They also can trim back vegetation and expose the ground to more sunlight in areas where humans congregate, like playgrounds.

“Pay more attention to what you wear. If you went for a hike, take a shower when you get home. It’s about prevention,” said Dr. Stephen Schmitt, veterinarian in charge of the Michigan Department of Natural Resource’s Wildlife Disease Lab.

These signs and symptoms may occur within a month after you’ve been infected:

■Rash. A small red bump may appear at the site of the tick bite. This small bump is normal after a tick bite and doesn’t indicate Lyme disease. However, over the next few days, the redness may expand, forming a rash in a bull’s-eye pattern, with a red outer ring surrounding a clear area. The rash is one of the hallmarks of Lyme disease. Some people develop this rash at more than one place on their bodies.

■In some people, the rash may spread to other parts of the body and, several weeks to months after you’ve been infected, you may experience:

■Joint pain. You may develop bouts of severe joint pain and swelling. Your knees are especially likely to be affected, but the pain can shift from one joint to another.

■Neurological problems. Weeks, months or even years after you were infected, you may experience inflammation of the membranes surrounding your brain (meningitis), temporary paralysis of one side of your face (Bell’s palsy), numbness or weakness in your limbs, and impaired muscle movement.