The value of the private company, already relatively low, could continue dropping, leaving little to split among thousands of plaintiffs

State and local governments have sought billions of dollars from Purdue Pharma as a way to hold the company and the family that owns it accountable for the nation’s opioid epidemic, a potential payout that is now clouded in uncertainty after state attorneys general said settlement talks had broken down.

The attorneys general directly involved in the negotiations with the maker of OxyContin and the Sackler family said they anticipated Purdue filing soon for bankruptcy protection.

“It seems that there will be little money for plaintiffs, if Purdue takes bankruptcy and the Sacklers are not kicking in any money for settlement,” said Carl Tobias, a professor at the University of Richmond School of Law. 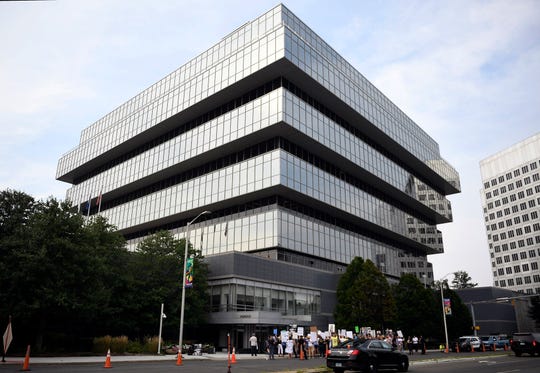 Family and friends who have lost loved ones to OxyContin and opioid overdoses protest outside Purdue Pharma headquarters in Stamford, Conn. (Photo: Jessica Hill, AP)

Nearly every state and about 2,000 local governments have sued companies in the drug industry over the toll of opioids, which have been linked to more than 400,000 deaths in the U.S. over the last two decades. The suits cast Stamford, Connecticut-based Purdue as a particular villain, saying the company’s marketing of its drugs downplayed addiction risks and led to more widespread opioid prescribing, even though only a sliver of the opioid painkillers sold in the U.S. were its products.

On Saturday, two state attorneys general leading settlement negotiations with the company – Tennessee Republican Herbert Slatery and North Carolina Democrat Josh Stein – sent an email to their colleagues saying talks were at an impasse and that they “expect Purdue to file for bankruptcy protection imminently.”

A Purdue spokeswoman and a representative of the family declined to comment on the email, which was obtained by The Associated Press.

Purdue has said for months that it wants to reach a deal that would settle all state and local government claims against it, but it also has threatened to file for bankruptcy protection. Bankruptcy would mark a major shift in the multidistrict litigation being overseen by a federal judge in Cleveland. It would likely take Purdue out of the first federal trial over the opioid crisis, scheduled to start Oct. 21.

Paul Hanly, a lead lawyer for the group of local governments, unions, hospitals and others suing the drug industry in federal court, said in a statement that any breakdown in talks didn’t represent his group of clients.

Those plainitffs, he said, “will continue to explore resolution of our clients’ claims against Purdue and the Sacklers, whether with or without the states and within or without bankruptcy court.”

A bankruptcy judge would have a lot of say over how to divide Purdue’s assets.

The value of the private company, already relatively low, could continue dropping, leaving little to split among thousands of plaintiffs. The company also could go out of business. That’s a big change from settlement proposals that would have kept the company operating in some form. Under one proposal, governments could have seen $10 billion to $12 billion over time, including at least $3 billion from the Sacklers as part of a deal that would have Purdue into a “structured bankruptcy.”

Pennsylvania Attorney General Josh Shapiro, who has been part of the negotiations, said the attorneys general did not believe the deal would have been worth that much.

According to the email sent Saturday, the company rejected proposals from the states that could have been worth less money but came with greater assurances that the Sacklers would deliver $4.5 billion.

If the company files for bankruptcy, the Sacklers could still be exposed to lawsuits. At least 17 states have sued one or more family member, and Shapiro said he intends to join them.

But that could be a legally tenuous option for two reasons.

“One big problem is it may be very difficult for states to convince judges to rule that family members are personally liable,” Tobias said. “And even if that happens, plaintiffs may have problems levying on the Sacklers’ assets, if they are offshore.”

Forbes magazine estimated in 2016 that the Sacklers had assets of more than $13 billion. New York’s attorney general has issued subpoenas for financial records of Sackler-connected entities in an effort to find how the family moved money overseas. The Associated Press found last month that a system of trusts and companies makes it difficult to trace the family’s money.

“This will be a challenging road forward,” Shapiro said in an interview.