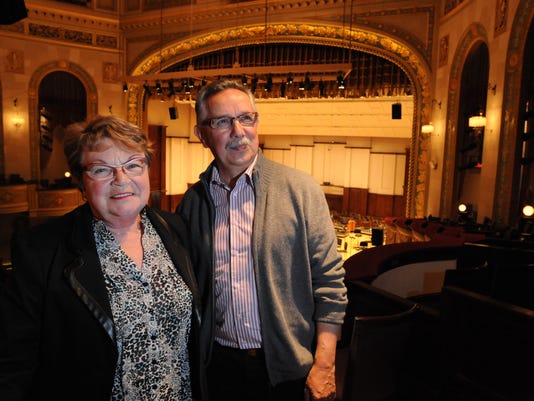 They’ve been on the ground in Detroit just two days, after flying in Wednesday from France. As you might expect, retirees Paul Chosson and Maria Lavastre are a little overwhelmed, a little jet-lagged and a little dazzled by the strangeness of it all.

How does a pair of French grandparents in surprisingly hip eyewear land in Detroit — of all places? They won a lottery held at the Orchestre National de Lyon where the grand prize was an all-expenses-paid trip to Detroit.

The Lyon orchestra, of course, is Detroit Symphony Orchestra music director Leonard Slatkin’s other home, and the raffle was part of his 70th birthday celebrations last September. In effect, the contest gave Lyon music lovers the chance to come to Detroit and hear Slatkin conduct his other orchestra.

Still, one can’t help but wonder what Chosson and Lavastre’s neighbors in tiny Sevres-sur-Rhône, population 750, thought of all this. Did they think they were nuts?

“Not at all!” said Chosson, as translated by DSO cellist Haden McKay, whose wife is French. “They were jealous. They wanted to come.”

Chosson explained that they had some idea in advance what Detroit would be like, based on numerous media reports from the Motor City during what Europeans of many languages call “la crise,” or the 2008 financial meltdown.

“And because Detroit is Leonard’s other orchestra,” Lavastre said, “we paid more attention to the city than we might otherwise have done.”

Still, even for world travelers like this pair, Detroit feels awfully exotic. On their drive-around Thursday, Lavastre said they were struck by “how spread out it all is, and that you see plenty of buildings, but they’re not all fixed up” — a gentle way of summarizing the city’s abandonment.

With a nod to the M-1 streetcar project and the numerous buildings undergoing renovation, Chosson put a positive spin on things, saying: “It’s like a city under construction, with all this building going on.”

There were other contrasts that denizens of a bustling, mid-sized European city like Lyon couldn’t help noticing — the absence of traffic jams everywhere, for example, and a striking lack of pedestrians on the sidewalks.

Natives of a hilly country, they also couldn’t get over how flat everything is.

Their tour across the city Thursday included downtown, Greektown, the Cultural Center, Eastern Market and the Detroit Institute of Arts, where they took in the “Diego Rivera and Frida Kahlo in Detroit” exhibit. (They loved it, and the “Detroit Industry” murals.)

This is not Chosson and Lavastre’s first trip to North America. They’ve visited Mexico, and last summer went on a group tour of the American southwest, which left them with fond memories of San Francisco and the Grand Canyon.

And they will take fond memories of Detroit, they insist, back to their village some 50 miles south of Lyon. They describe their treatment here as befitting VIPs.

“We have had a very warm welcome in Detroit,” Lavastre said.

They were slated for yet more VIP treatment Friday night. After the DSO’s performance of Bruckner’s Fourth Symphony and Andre Previn’s Double Concerto, the pair were scheduled for a private dinner with Slatkin and his wife, Cindy McTee, as well as Mo Omari, president of the French Institute of Michigan.