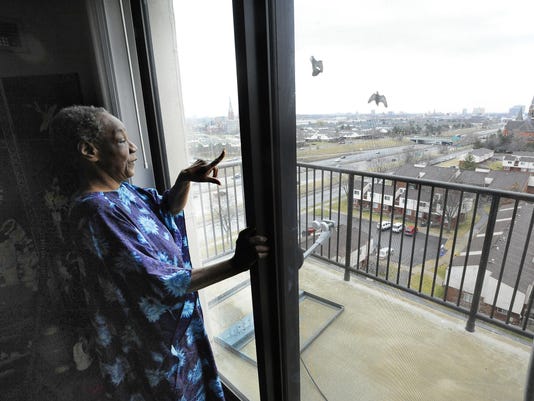 Fayette Coleman, who is a little nervous about heights, in her new home, an apartment near the medical center area overlooking Detroit, in Detroit, Michigan on March 9, 2016.(Photo: Daniel Mears / The Detroit News)Buy Photo

For the first time in nearly three years, Fayette Coleman’s water comes from a faucet — not plastic bottles or rainwater collected in a garbage can.

“I appreciate it so much. I respect the water,” said Coleman, 66. “The first time I took a bath, my body just screamed it was so nice. It’s what I craved.”

Coleman turned on the tap in her new apartment on I-75 near Warren last Friday, leaving behind a ramshackle, tax-foreclosed rental home in Brightmoor whose water was shut off in May 2013. She was featured in a December article in The Detroit News about the 6,000 homes in Detroit — and likely many more — whose water was never turned back on after a massive citywide shutoff campaign.

Her plight and pluck attracted an outpouring of concern, prompting City Hall to intervene. Detroit officials directed the nonprofit Southwest Solutions to find Coleman housing and other assistance. The apartment is rent-free and utilities are covered. Others featured in the article also received help.

“The city is doing everything it can do. Her life will be greatly improved,” said Gary Brown, director of the Detroit Water and Sewerage Department. “There’s a need for help out there and ... part of our role is to find adequate housing for citizens who need it,” he said. “Something that may look like a Water Department issue is really a poverty issue. Whether the city turns water on or off, the underlying problems remain.”

Coleman’s situation isn’t entirely unusual for a city where 40 percent of residents live in poverty. The onetime factory worker, whose sole income is federal disability payments of $954 per month, had rented a tiny home on a desolate street next to a crack house.

Last November, Fayette Coleman is seen living in Detroit's Brightmoor neighborhood and collecting water that runs off her roof into a garbage can. (Photo: Clarence Tabb Jr., Detroit News)

Coleman moved out a few weeks after wild dogs that roam the neighborhood attacked and killed her cat. Her new, one-bedroom apartment has a balcony overlooking the city’s skyline.

The quiet takes some getting used to, Coleman admitted. So does the tap.

“I haven’t felt this good in a long time,” she said. “For so long, I just survived. Not thrived. Just survived. People don’t realize what water does to your body and what happens if you don’t have it.”

Her ordeal began over a $7,000 water bill she said she never knew existed.

She moved into the house in 2010 after her old rental burned. For months, the water bill that came in the mail showed a zero balance, according to bills reviewed by The News.

Unbeknownst to Coleman, another bill was going to a post office box of a landlord who cashed her rent but stopped paying taxes. The home was foreclosed because of back taxes in 2013. It is now owned by the Detroit Land Bank.

“For every one of me that goes public, there are two or three others out there still living without water who don’t have the courage to speak up,” Coleman said. “They need to know that standing up for themselves is not wrong.”

Last year, water was shut off at 26,500 homes and restored to 20,800 after occupants entered into payment plans. As of last month, about 1 in 4 occupied homes citywide, or 44,000, are on repayment plans for delinquencies — and 9,000 are eligible for shutoffs because they are 60 days past due, city records show.

Brown took over the water department last fall and vows to fix its myriad problems. Shutoffs were suspended for the winter and the city is committed to working with customers, he said.

This month, the Great Lakes Water Authority that manages water and sewer for the three-county region launched the $4.5 million Water Residential Assistance Program. About $1.5 million of that is available to city residents.

The program covers one third of the cost of average monthly bills and freezes overdue amounts for customers who are 150 percent below the federal poverty level, $36,450. It also covers minor plumbing repairs.

Coleman’s situation also underscores the paucity of subsidized housing in Detroit. She was deemed homeless by the city but it took more than two months to relocate her — in part because of paperwork issues.

Steve Palackdharry, a spokesman for Southwest Solutions, said the nonprofit helps find housing for 150 to 200 homeless people and families per year and “knows firsthand the chronic shortage of affordable housing.”

Last year, the Detroit Housing Commission opened its waiting list for housing assistance. Some 40,000 applied for 7,000 spots, according to an article in the Huffington Post.

“Clearly, providing quality affordable housing must be a priority in our city if we are to truly address poverty and the growing gap between ‘the haves’ and ‘the have-nots,’ ” Palackdharry wrote in an email.