Columbus, Ohio – — Millions of students will sit down at computers this year to take new tests rooted in the Common ... 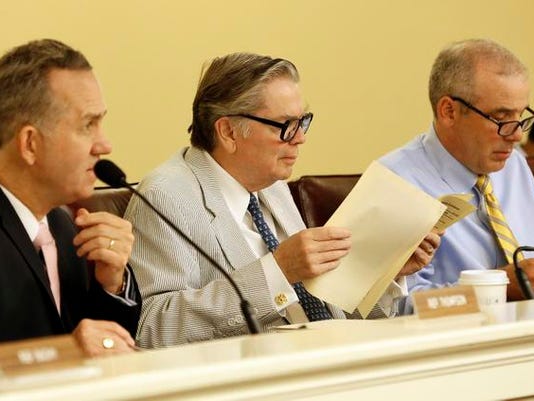 Columbus, Ohio – — Millions of students will sit down at computers this year to take new tests rooted in the Common Core standards for math and reading, but policymakers in many states are having buyer’s remorse.

The fight to repeal the standards has heated up in Ohio, where Republican legislators such as state Rep. Andy Thompson saying it’s kind of “creepy the way this whole thing landed in Ohio with all the things prepackaged.”

The standards were scrapped earlier this year in Indiana and Oklahoma. Governors in North Carolina, South Carolina and Missouri have signed legislation to reconsider the standards, even though they still will be used in those three states this fall.

Like many critics, Thompson and Jindal base their opposition on federal support of the standards, but states led the Common Core movement that really took off in 2009 and that effort was voluntary. The Obama administration offered incentives to states to adopt college and career-ready standards, and Common Core fit the bill. The incentives included cash grants and permission to ignore parts of the much-maligned No Child Left Behind law.

The standards emphasize critical thinking and spell out what reading and math skills students should grasp at each grade level, while leaving how those skills are mastered up to districts and states. The hope was that higher standards shared across state lines would allow for shared resources, comparable student performance measures and smoother school-to-school transitions for children who move, such as military kids.

Nearly every state adopted the standards.

Teachers’ unions, historically aligned with the Democrats, endorsed the standards and helped develop them. But they now complain about botched efforts to put them in place and say it’s unfair to use Common Core-based assessments in new teacher evaluation systems rolling out in much of the United States.

The issue has gotten pulled into a general anti-testing backlash in parts of the country. To ease the testing concerns, Education Secretary Arne Duncan recently said he would allow states to delay using students’ test scores in teacher evaluation systems.

“What really has happened is that this has become a politicized issue and it’s become an ideological symbol, interestingly, on both sides,” said Patrick McGuinn, a political science professor at Drew University. He said the standards and the assessments designed under them are generally considered acceptable or of high quality.

Far from the political discourse, American classrooms continue to be transformed by the use of the standards, with new curricula developed and teachers trained. Some parents are perplexed by the new ways their children are completing their lessons.

Supporters like former Georgia Gov. Sonny Perdue, a Republican who helped lead the governors’ group that identified the goals set by Common Core, say politics and mistruths have hijacked a needed and effective education overhaul.

The standards were a response from governors in a defensive mode to keep the federal government out of education, Perdue said, and he supported the changes out of concern for U.S. students’ global competitiveness. The U.S. Chamber of Commerce is among backers.

“It’s just a situation that I don’t think should have become political, which has become politically toxic and I don’t really know how to decontaminate that,” Perdue said.

A PDK/Gallup Poll released Aug. 20 found a dramatic change in the number of people aware of the standards. Last year, two-thirds of those surveyed said they’d never heard of the standards. This year, 81 percent said they had — and 6 in 10 said they oppose them.

Daniel A. Domenech, executive director of the national organization representing school superintendents, said polling provides more evidence it’s important to “slow down to get it right.”

This school year marks a milestone. This coming spring, roughly 11 million students in more than half the states are expected to take new computer-based assessments aligned with Common Core standards that were developed by two groups of states to replace the standardized tests that had been used.

States can choose the assessment to be used, but those decisions haven’t been without controversy. Some states, including Georgia and Michigan, that originally joined the consortiums, have dropped out and opted for different tests.

The rollout of Common Core-based tests will be watched closely for computer glitches and other problems, as well as to see how well students perform.

The ambition of Common Core is “quite broad,” said Jonathan Supovitz, co-director at the Consortium for Policy Research in Education at the University of Pennsylvania. He said the standards have the potential to bring new tools and technologies into classrooms and lead to greater student mastery of subjects, but it will take time.

“This is not going to happen overnight. It’s going to take lots of resources and lots of teacher exposure to new ways of doing things and we’re just at the beginning of that process,” Supovitz said.

Jindal initially supported Common Core. He said that’s because the standards were first presented as a bottoms-up approach, but “the reality is what it has become is another tool for the federal government to try to dictate curriculum.”

He suspended contracts that the state Department of Education planned to use to buy testing material aligned with the standards. White and education board leaders say the governor overstepped his legal authority, and they sued. A state district judge has since said the governor’s actions were harmful to parents, teachers and students and he lifted Jindal’s suspension of the contracts. The decision allows White to move ahead with Common Core-tied testing plans until a full trial is held later over the legality of Jindal’s executive orders against the standards.

At the same time, 17 state lawmakers who oppose the standards have lodged their own legal challenge, but lost their first round in court.

Education Secretary Arne Duncan has criticized the Jindal’s opposition to Common Core as politically driven. In a June interview with “CBS This Morning,” the secretary said of Jindal’s switched position: “It’s about politics, it’s not about education.”

In Ohio, some teachers have raised concerns about how the standards came out, Ohio Federation of Teachers president Melissa Cropper said, but most largely support them. Some of the state’s largest urban districts, such as Cleveland and Columbus, have spent two years and lots of money preparing for the rollout that started this school year, she said.

Cropper urged state lawmakers to stay the course with the standards, which were adopted in 2010.

“All that time, energy and resources would be wasted,” Cropper said. “I think it will absolutely throw our districts in chaos.”

State Rep. Thompson, whose wife is a Spanish teacher, isn’t convinced. He says Ohio and other states adopted the standards in the wake of the economic downturn because they were in desperate need of money.

Parents and educators opposed to the standards in Ohio were allotted three full days of hearings in mid-August to discuss the merits of replacing Common Core. Defenders of the standards were relegated to holding news conferences.

Lincoln Bramlage, a father of three from Ottawa-Glandorf in northwest Ohio, said the standards are “hardly relevant.” He added: “We need to fight for the teachers and the kids. This is not education. It’s indoctrination.”

Carrie Moenster, a parent and teacher, said she’s seen her fourth-grade students in tears because they couldn’t understand math standards that she called “abstract and developmentally inappropriate.”

“One child who was once very confident comes up to our desks repeatedly while working on an independent assignment because he doesn’t trust his own mind and judgment anymore,” she said.