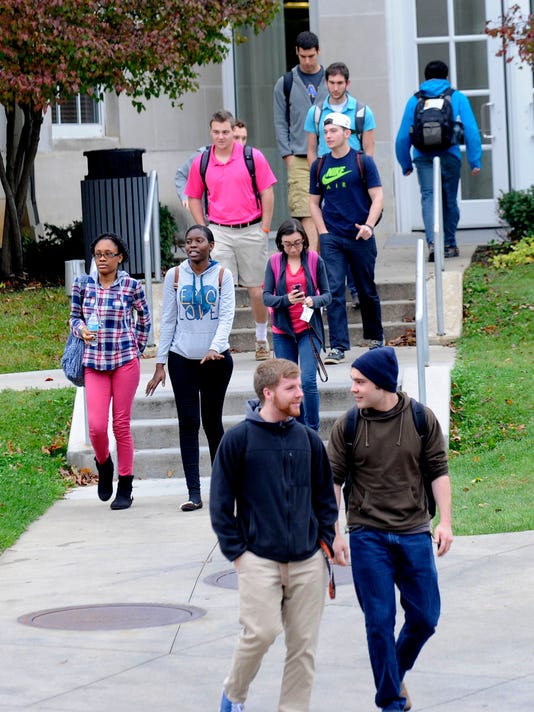 Donna Aguilar's parents, who couldn't afford to go to college, always encouraged her to make a better life for herself.

So four years ago, Aguilar left her home in Los Angeles to attend Kalamazoo College. She will graduate next year with a biology degree.

"They thought I would have more choices if I went to college," said Aguilar, the daughter of a custodian and a factory worker. "I would get a better job than they have and I could live more comfortably than they had."

Aguilar represents a quiet revolution that has been underway at Kalamazoo College.

The small private college on the west side of Michigan is part of a movement that is gaining momentum to promote campus diversity by attracting students from varied socioeconomic backgrounds, especially as Michigan and other states have banned affirmative action in college admissions.

Less than a decade ago, Kalamazoo College officials noticed the student body was less diverse than the two big cities the school sits between, Detroit and Chicago. So they changed recruiting strategies, increased financial aid and added more academic supports to help students stay in school and graduate.

Since then, the college has boosted its numbers of low-income students by a third, to 22 percent, and the school has gone from almost no first-generation college students to 16 percent.

Most schools regard students as low income if they qualify for the federal Pell Grant, an award of $500 to $5,500 a year based on family income that does not have to be repaid. According to the Student Aid Alliance, nearly 75 percent of Pell Grant recipients' family income is $30,000 or less.

Young people from low-income families, and first-generation college students, are not necessarily the same as minority students. But like minority students, they are less prevalent on campuses than their wealthier counterparts from well-educated families — and they are rare at the nation's most elite universities, such as the University of Michigan.

Proponents say minority students at competitive colleges tend to come from middle and upper-class families, and that racial and economic diversity could be improved by expanding college access to low-income students. Doing that also would increase the upward mobility of such students.

"If you look at who goes to elite colleges like the University of Michigan, it tends to be students from families that are quite wealthy," said

Other scholars point to studies that show admitting students based on class as opposed to race will achieve some racial diversity, but not the same level netted with affirmative action. They say both tools are needed to include more students from different income levels and racial groups.

"If we are going to address the gaps, we need both class-based and race-based admissions," said Donald E. Heller, dean of Michigan State University's College of Education and an expert in higher education. "Stratification is getting worse in higher education. Enrollment is much more skewed to the upper half of income distribution of America, and there are fewer students of color."

The conversation about campus diversity has centered on race and ethnicity. It sparked a decade-long debate in Michigan, which resulted in two U.S. Supreme Court decisions that essentially outlawed the use of affirmative action in college admissions.

Now some say it's time to push harder to welcome students from low-income families.

"The university should be open to everyone," said Mike Urso, a Wayne State University freshman studying music education. "Your background shouldn't matter."

When it comes to economic diversity, the state's two largest schools — UM and MSU — are below national averages, according to data from the Institute for College Access & Success.

Nationally, 33 percent of students at public universities in 2011-12 received Pell Grants, an imperfect but frequently-referenced touchstone for low-income status. During that same period, 24 percent of MSU students received the federal grant and only 17 percent at UM. Wayne State, by contrast, is well above national figures, at 44 percent.

UM recently hosted a conference on economic diversity, which attracted scores of higher education luminaries from across the country.

President Mark Schlissel spoke during the event, telling the group that though the nation's focus of diversity has been on race and ethnicity, but "... equally important is the diversity of experience, diversity of culture, socioeconomic diversity, or geographical diversity."

UM is not the most economically diverse campus, though there has been some change in recent years.

Just 1 in 5 UM undergraduates comes from a family with household income of $60,000 or less, according to an annual survey of students by the university. That percentage has grown slightly over the past decade.

At the same time, 6 in 10 UM undergraduates are from families with annual incomes above $100,000, a population that is growing steadily.

The state's flagship university has "always had a need-blind admissions process," spokesman Rick Fitzgerald said in an email.

Tuition at UM costs $13,158 for in-state undergrads and $41,578 for nonresidents, but the university has been steadily increasing financial aid.

MSU does not survey students about family income.

But every summer, a handful of high school students live on campus for a few weeks for a program that attempts to change the trajectory of their lives, said Heller, MSU's education dean.

"Through this program," Heller said, "we've had good success in creating a pipeline for students who are harder to recruit onto our campus."