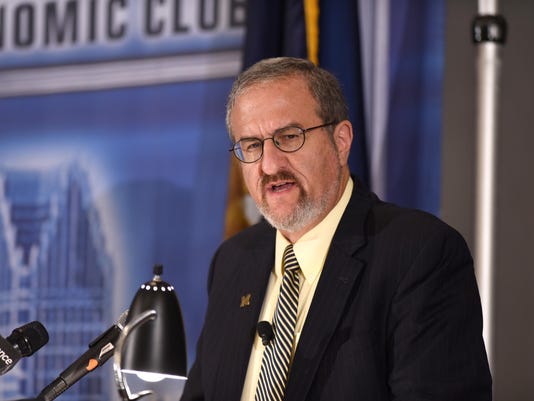 Dearborn — University of Michigan’s president apologized to residents of an Ann Arbor neighborhood Thursday, saying a development project was on hold and that the university should have reached out earlier about the plans in the city’s northeast.

Planned in 2014, construction at the new site by Green and Hubbard roads, near U.S. 23 and Plymouth Road, was about to begin when the university held a meeting in the neighborhood in February and neighbors balked.

“The recent neighborhood meeting made it clear that the university must be more thoughtful and responsive when considering a development that adjoins a residential area,” UM president Mark Schlissel said during a board of regents meeting at the University of Michigan Dearborn.

“In the future, our efforts to consider community interests in designing and locating facilities will incorporate more formal outreach far earlier in the development approval process. I apologize that we did not live up to this commitment regarding the transit and operations center project.”

Schlissel said the project is on hold, all permits have been withdrawn and the university is going to take a fresh look at the project.

“We will do a better job at seeking and evaluating community input, and I am committed to working in partnership to address all of the issues that have been raised,” Schlissel said.

Five residents spoke during the public comment portion of the meeting to address the issue. Many residents thanked Schlissel for his actions, but remained concerned.

“Hundreds of families live in this neighborhood,” said Sarah Steingold. “The planners sold you this project based on dollars, efficiency and convenience. But what about people? What about the health, safety and tranquility of the nearby inhabitant? Totally ignored. That’s shameful.”

Linh Song, an alumna and resident of the neighborhood, said she was with the Northeast Ann Arbor Coalition, which represents more than 800 residents from five communities adjacent to the planned site.

The group organized three weeks ago when the community first learned about the plans.

Song said the information was alarming, especially since 60 buses were expected to be in the neighborhood every hour, seven days a week and not far from one of Ann Arbor’s few low-income housing communities and a park.

Song brought her children, who presented regents with toy buses that were painted by children in the community.

“This is a reminder of how your decision influence our children and our families,” Song said.

Exactly how many vehicles will be added to the roads every hour wasn’t clear, but the maximum number will be 140 at the peak hour, said Sue Gott, university planner.

Lola Killey, an alumna and resident of the neighborhood, said data crunching won’t convince the community that the facility won’t pose issues of air quality, noise pollution, traffic and safety hazards, she said.

“Change the location,” Killey said. “Change the prevailing attitude that UM doesn’t care about Ann Arbor or its people. Partner with us for a solution.”

Regent Mark Bernstein disagreed that UM doesn't care about Ann Arbor, but added that he was impressed by the advocacy of the community calling it “deeply concerned, enormously thoughtful, intelligent.”

“You have been far more respectful to us than we have been to you in this process,” Bernstein said.