University Prep middle, elementary school teams are masters of the board 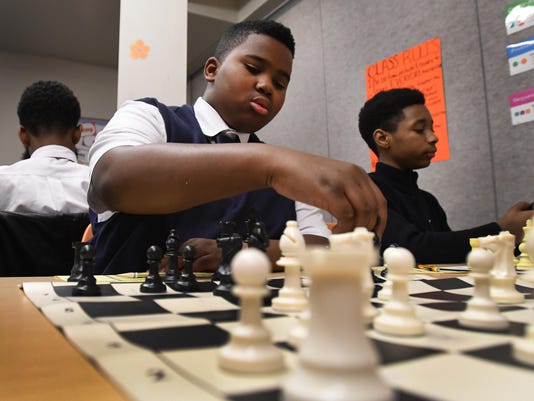 Detroit— The pint-sized chess champions silently stare at their boards, envisioning their next moves.

Knights and pawns, rooks and queens rule when the students at University Prep Science and Math Middle School are not studying chemistry and algebra. The students have won so many chess trophies that the school’s showcases no longer have enough room to display them all.

The chess team at the middle school, located inside the Michigan Science Center in Detroit’s cultural center, is the defending national champion. University Prep Science and Math Middle School’s sixth-graders won the K-6 state elementary championship Feb. 4, while the seventh- and eighth-graders won the junior high state championship a little more than a week ago. UPSM Elementary school won the Metro Detroit City League Elementary Division Jan. 14, making it the best elementary team in the area.

“Even though it was a middle school competition, University Science and Math Middle School is for grades sixth through eighth, so the sixth-graders qualified to compete,” said middle school chess coach Kevin Fite, a former math teacher who once taught in public, private and charter schools.

Each team is serious about defending its title or winning a new one in an upcoming national competition. The elementary school team is coached by Robert Ellis.

They are preparing to compete in the SuperNationals VI national chess tournament May 10-15 in Nashville, sponsored by the U.S. Chess Federation. The event, which has all of the elementary, junior high and high school national contenders playing under one roof, is held every four years.

University Prep chess team members also happen to be among the top students academically, says principal Mischa Bashir. But it takes more than straight A’s and a mastery of the game to win so many championships.

So what is their secret?

The thrill of winning, the students say, but mostly it’s having heart.

“I love the competitiveness, although I’m not too good at losing,” admitted Kameron Wilson, the captain among the 40 members of the middle school team. “I think the real reason we keep winning is because we have a lot of good players and a lot of heart on the team.”

But 13-year-old Kameron said he tries to remain humble.

“We can’t let that go to our heads because there could be another team waiting to end our winning streak,” said Kameron, an eighth-grade student who wants to become a physician specializing in sports medicine.

He wants to continue playing chess with the ultimate goal of becoming a grand master — like the legendary Bobby Fischer or Samuel Sevian, who more than two years ago became the youngest American grand master in history at age 13.

Both the University Prep elementary and middle school chess teams need $55,000 combined to travel to Nashville. They’ve already raised about half of the amount, but they need the community’s help.

“We are like a sports team because we travel all over the country competing in tournaments all the time,” said Fite. “The parents always pay, but they’re just about tapped out now and we just need some help,” he said.

Fite, who also founded the Detroit City Chess Club in 2003, serves as cheerleader, surrogate nice dad, motivator and sometimes, stern dad. His love of the game and for his kids is reflected back to him. The chess team members said they want to win for him as much as for themselves.

Asked why she thinks the team wins so frequently, Charisse Woods, 11, pointed to Fite.

“Mostly because he’s our teacher,” she said. “He’s so inspiring.”

Fite is in the schools with them as well as at the Detroit Institute of Arts where he coaches students on Fridays. He attributes University Prep’s victories to being more than just a chess team.

“We do a lot because we are not your traditional chess club,” said Fite, overseeing chess practice at the middle school on a recent afternoon.

“We participate in a lot of community service like volunteering at Gleaners and the ‘Bags of Love’ sponsored by UAW-Ford, where we bag Christmas turkeys and other goods,” said Fite, whose older brother taught him to play the game when he was 8 years old.

“Some days, we talk about real life issues,” he said. “Some of the kids don’t have fathers, and I talk about growing up without my father. Sometimes we’re all crying if something is not going well at someone’s home. It is comforting for kids to know other people have gone through what they’re going through.”

But it’s not always so serious.

Fite takes the team to sporting events and movies. One of their favorite things is to go to Milano’s Bakery at Eastern Market, eat pizza and play chess.

Sal Chehayeb, president of the Michigan Chess Association, a nonprofit affiliated with the U.S. Chess Federation, said to play in rated MCA tournaments in Michigan teams must be members of both the MCA and the federation.

“The students at University Prep are very well coached and very well practiced,” said Chehayeb. “They play regularly and attend regular competitions which helps them improve and that kind of winning is contagious and inspires the weaker players to become better.”

Charisse is so good at the game, she played against Detroit Mayor Mike Duggan in January 2014 at the age of 8.

“It was a draw,” she said modestly. At the time, the mayor good-naturedly called for a rematch.

“I was both really nervous and excited to know that someone really important has something in common with me and it was good to know he used to play chess when he was still in school,” Charisse said.

Charisse, who Fite said is the highest-ranking junior high female in Detroit, began playing the game in the second grade.

“Usually, girls find chess boring because you have to have a pretty good attention span and some people can’t sit still that long,” she said.

Charisse, who loves biology and chemistry, wants to be a scientist, also loves the sportsmanship.

“I like when we’re doing tactics (where a chess board is displayed on a computer screen from chesskids.com, and shown on a wall and students must solve positions like a chess puzzle), and when someone gets a tactic right and we clap, it makes that person feel good and it makes me feel good for them.”