A total of 123 school districts across the state have received waivers to start school after Labor Day. 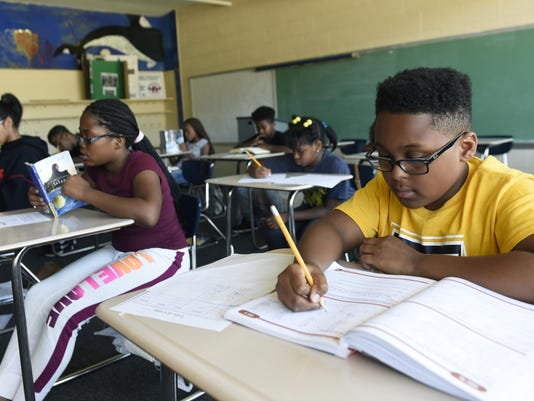 A record number of Michigan school districts are bypassing the state’s 11-year ban on starting school before Labor Day and opening their doors to students in August.

A total of 123 school districts across the state have received waivers from the Michigan Department of Education that release them from the requirement to start school after the late summer holiday.

It’s the highest number granted since the department began issuing waivers in 2006 to side-step the state law designed to boost state tourism in August and early September.

One education trend pushing the number of waivers up statewide is steady growth in the number of districts offering Early/Middle College programs, which give students the chance to earn associate degrees or certificates along with their high school diplomas, said Bill Disessa, a state education department spokesman.

Of the 123 applications approved for the 2017-18 school year, 55 sought an early start to align their school calendars with post-secondary institutions.

“Many of these programs require that the district and post-secondary calendars align, and many post-secondary institutions have start dates prior to Labor Day,” Disessa said.

Districts are granted waivers because they meet exemptions built into the law. Those exemptions also include increased instructional time as part of a reform plan as well as balancing a school calendar for year-round schooling.

Forty-one districts approved for the waivers are year-round schools. Seven schools labeled as “persistently lowest achieving” will use their waivers as part of an intervention model with increased learning time.

Also this year, 24 of Michigan’s 56 intermediate school districts received a waiver to start school before September. Under a change in the law that occurred last school year, the state allows an ISD to obtain a three-year waiver that covers all of its local districts.

Only 67 waivers were issued last year — a dip attributed to the change allowing a waiver obtained by an ISD to cover local districts, Disessa said.

None of the waiver requests was denied this year thus far, Disessa said. Districts must re-apply every year — unless they fall under an ISD waiver. Districts must have applied for a waiver by July 30.

ISDs with waivers this year include Oakland, Genesee, Kent, Jackson and Ingham. Within the 24 ISDs, there are 253 individual school districts that can opt to use the waiver for an August start.

State education officials said that means 376 districts out of 900 statewide — about 42 percent — could potentially start school next month. However, the waiver is optional and individual ISDs won’t learn until September — when they get calendars from local districts — which ones started in August and which did not.

Wayne-Westland Community Schools applied for the waiver on its own and received approval this summer to prepare buildings and classrooms for the first day of school on Aug. 30. The early start applies to all 20 schools within the district.

Superintendent Michele Harmala said the district moved to the August start after it renegotiated its teacher contract this summer and needed to add seven instructional days to its calendar to meet the 180-day state requirement.

“We had to add them somewhere. This (past school) year we went to June 15. So to prevent going all the way into the week of June 20, we added the days through the year (and in August),” Harmala said.

“It really fits for us,” says Rashid Faisal, principal at Frederick Douglass, about the idea of an August start and shorter summer break. (Photo: Clarence Tabb Jr. / The Detroit News)

The 11,400-student district in Wayne County will still be off the Friday before Labor Day, as required under the law even with a waiver.

“Either way, kids are going to have a summer break. It just matters which end of the break you are adjusting to,” Harmala said.

Students at Frederick Douglass International Academy in Oak Park, a charter school for preschool through eighth grade, have their first day of school on Aug. 14 after the district won approval for a waiver to move to a year-round calendar.

The change will shorten next summer’s 12-week break to seven weeks, give children more time with teachers by adding two instructional days and shift the schedule to one with 45 days of instruction followed by 14 school days of intersession where tutoring and group projects are offered to students.

Sarah Peters, human resources and compliance director for the Hanley Harper Group, which manages the school, said students and parents are already at school during the summer and on Saturdays for tutoring and educational programs, so the new August start won’t be a dramatic change.

“Our student population in where they are coming in education wise, it helps us to have an early start and do more remediation throughout the year and help them grow academically and get to grade level,” Peters said.

The school spent 18 months floating the idea of an August start and year-round school to parents via surveys and focus groups. School principal Rashid Faisal said buy-in from parents and staff was critical to moving toward the new schedule.

“It really fits for us,” Faisal said. “Like 99 percent were ‘OK, great.’ We didn’t want to move forward without parents really being supportive and understanding.”

Michigan outlawed the practice of starting school in August starting in the 2000-01 school year in a nod to tourism officials who say July and August are the top two highest revenue-producing months for Michigan’s tourist-related businesses.

In March, a bill was introduced that seeks to allow schools across Michigan to open before Labor Day without state approval. It remains on the Senate floor and is not expected to impact the upcoming school year, state officials said.

But the bill mandates that classes aren’t held on Mondays or Fridays in August.

The bill’s sponsor, Sen. Marty Knollenberg, R-Troy, said on Friday his homework the rest of this summer is to convince his colleagues in the Senate the bill is the right thing for the state’s 1.5 million schoolchildren.

“This is in the best interest of the kids and letting local superintendents and local parents decide what is best for themselves,” Knollenberg said. “It’s not going to happen in time for this school year. It’s a longer term plan for me. I’d like to get it completed this year and in place for next year.”

Deanna Richeson, president/CEO of the Michigan Lodging and Tourism Association, testified before state lawmakers in March to oppose the bill.

Richeson noted alternatives to starting before Labor Day are to extend the length of the school day by 20 minutes or extend the school year to later in June.

"Parents want the opportunity to make family vacation memories during the two most predictably hot months of the year: July and all of August," she has argued.