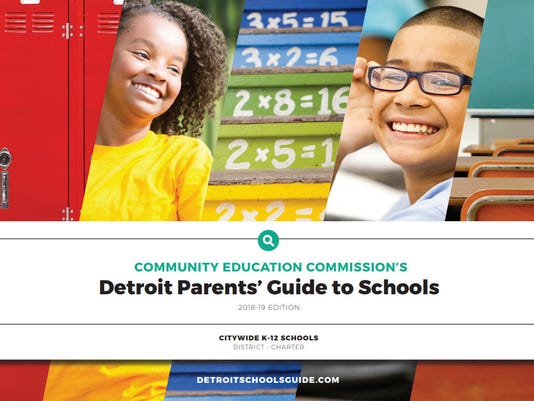 Detroit — In a city where parents have nearly 200 school choices for their child, a newly released guide is intended to offer some help for Detroit families.

The Community Education Commission released on Tuesday its Detroit Parents’ Guide to Schools for the 2018-19 school year.

The commission, a nonprofit created by Mayor Mike Duggan to help families access quality schools in Detroit, created a 248-page guide with information on Detroit’s 197 public and charter K-12 schools.

The guide includes school profiles, enrollment timelines, an overall map of schools, transportation options and other information on 109 schools at Detroit Public Schools Community District and 88 charter schools in the city.

The guide is color-coded according to areas of the city and includes information in English and Spanish. It also includes a suggested checklist for choosing a school.

It does not include academic information, letter grades or state test score data on the schools, information that was provided on a school scorecard published by former nonprofit Excellent Schools Detroit, which disbanded in 2017.

Monique Marks, commission chairwoman, said one of the commission’s roles is to champion additional resources that help families and students get the best education they can in Detroit.

“We are working together as a city in unprecedented ways to deliver high-quality information and options to Detroit’s families," Marks said. "Hopefully, parents can use this guide to make very informed decisions."

Letter grades for each school will be part of the 2019-20 school year guide, Marks said. They were not included in this year's guide because an A-F grading system for schools in Detroit has not been created by state education officials, she said.

The commission began sponsoring workshops for Detroit parents in July to provide parents and students with tools to navigate the guide to find accurate and meaningful information about any district or charter school in the city, officials said.

In June, the commission launched the GOAL Line, a free bus loop that takes students to and from 10 schools and after-school programming in the northwest area of the city.

GOAL Line information is part of the guide.

Emerald Burk, mother of a 10th-grader at the Henry Ford for the Creative Arts and a sixth-grader at Detroit Edison Public School Academy, said she grew up in Detroit and attended and graduated from a Detroit school.

"So I've always been committed to my two girls attending schools here in the city," Burk said. "As a parent, I appreciate finally there being one place where I can see all of the schools open in Detroit, and actually understand what my options are for my girls."

The commission will hold a family fun day and school enrollment fair to introduce the Detroit Parents’ Guide to Schools to residents from noon to 3 p.m. on Thursday at Wayne County Community College’s downtown Detroit campus on Fort Street.

An online version of the guide will be available here.