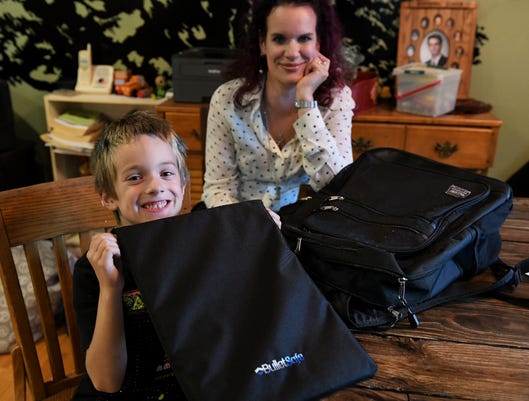 Graham Rockafellow, 6, shows the BulletSafe insert for his backpack that his mother, Maya Rockafellow, got for him as he starts first grade. Photos taken at their home in Shelby Township, Mich. on Aug. 21, 2018. The BulletSafe backpack panel is 10 x 14 inches and can be put in a backpack, briefcase or or any other bag.(Photo: Robin Buckson, The Detroit News)Buy Photo

Welcome to future of school safety in Michigan, where security has become a top priority this school year for administrators who say they are taking matters into their own hands before their students and staff become victims of the next mass school shooting in America.

The Springport School District is among more than 250 Michigan school districts that have turned to high-tech security systems to protect from an armed intruder or active shooter.

Superintendent Bob Cassiday said Springport is a small, rural district with a small, local police force that sits between the larger cities of Jackson and Marshall. Cassiday estimates his schools are a good 20 miles away from first responders in those cities, as well as the county sheriff's departments and Michigan State Police posts.

"It will take a while for someone to respond. We are taking matters into our hands. We are ultimately responsible for our own security," Cassiday said. "If we can put in another line of defense between an intruder and our vulnerable population, our school board has deemed it worth the expense."

In case of intruders, the Springport , Michigan district will use a system that prevents classroom doors from opening and triggers 911 notifications. The Detroit News

Two days before school started last week, Cassiday called in all 140 district employees, including teachers, bus drivers, food service and custodians into the school library for a demonstration of a new SmartBoot System designed to stop intruders from entering classrooms.

The "boots" are rectangular-shaped plates — a quarter-inch thick of industrial steel — that once in place at the bottom of a door put 16,000 pounds per square inch against an intruder. Once the boot is pulled from its holder and inserted into the bottom of a door, red lights are activated, as is an audible alert repeatedly saying "lockdown."

The boot triggers 911 notifications to smartphones and tablets and to first responders. The system also can be activated if it detects the sound of gunfire inside a school.

Nearly 150 SmartBoots are being installed across Springport's school district. Cassiday told the district staff members they needed to learn how to use the system and then they need to teach their students.

“We have to figure this out. You guys are responsible for your own security. Plain and simple,” Cassiday told his staff who were seeing the reds lights and hearing the lockdown audio for the first time. “And as you teach your kids about this stuff, you have to get this message across to them: they are in charge, no matter where they are. They have to know what to do.”

The new security system and an LED lighting upgrade are costing the district $423,921. The expense is being for paid for through the district's general fund budget. Cassiday said with a projected monthly energy savings of $4,429.19 a month from the new light system, the security system will be paid for in eight years. 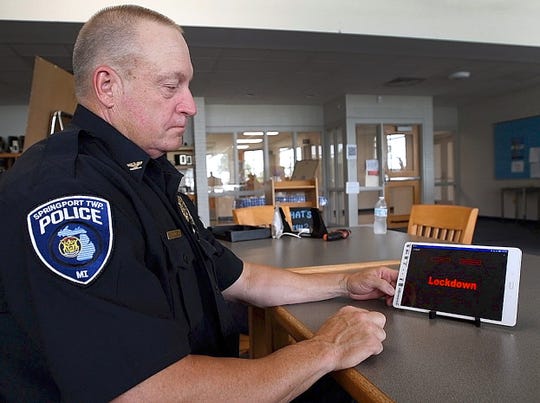 Springport Twp. Chief of Police David Luce demonstrates the phone app that helps power the Springport, MI, Schools' new security system on Monday, Aug 20, 2018. The system uses a steel "boot" placed in a slot at the bottom of the door, locking it to the floor. (Photo: Dale G. Young, The Detroit News)

Michigan students heading back to school this month and next  will notice additional security measures that range from shatterproof glass to new security cameras to improved access control systems.

In 2017, State Police received 84 requests for school safety grants totaling more than $8.4 million. Applications were limited to $50,000 per school or $250,000 per district, and in the end, about $2 million was awarded to 25 public school districts, 24 non-public schools and three charter schools.

Hopkins Public Schools in Allegan County spent $10,215 on a panic button system at multiple schools. The Holly Area School District in Oakland County spent $59,000 on 20 interior and exterior cameras and a system of data drops, Ethernet cables and a server.

Spending on school security is expected to increase dramatically this coming school year after state lawmakers gave $25 million to the Michigan State Police for school safety grants in the wake of mass school shootings in Parkland, Florida, and Santa Fe, Texas.

Districts began applying for the money on Aug. 1 and have until Sept. 13. Schools can apply for $1 million for school security improvements with a required 25 percent match, said Matt Opsommer, grants coordinator for the Michigan State Police.

Grants of up to $25,000 per school or up to $250,000 per district or intermediate district with no match required are also available, he said.

"With the two different program areas, my expectation is we will have much higher amount of applications than funding to award. Schools shave been calling and asking about the grants," Opsommer said last week.

What is not allowed: weapons, body armor or construction or personnel costs. 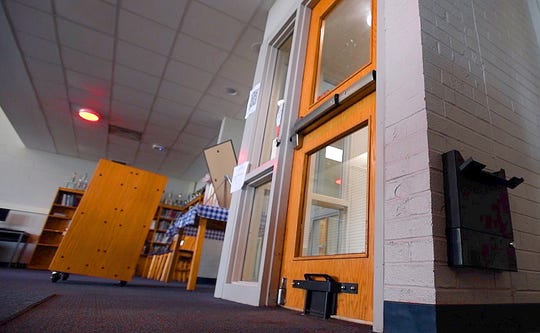 'The eyes for the school'

In Springport, Rob Couturier, owner of the Howell-based Lockout Co., paid a visit to the district staff last week to talk about his SmartBoot products and other security services, which he says are in more than 250 school districts in Michigan.

The goal of the system, Couturier said, is maintaining the safety of classrooms and buildings by keeping danger out.

Schools are installing the system at the same time they are upgrading lighting systems to LED, which saves the school money, Couturier said. The cost of the SmartBoot system ranges from $75,000 for a small school to $450,000 for a large building, he said.

"The superintendents are being proactive now, instead of waiting for the next Sandy Hook. My hats are off to these superintendents. They are doing a wonderful job," he said. "Police and sheriff are telling schools to call us and use the system. They don’t want to be behind the eight ball."

After installing the system, Couturier then performed classroom security assessments for teachers in Springport, asking them where their students will hide in the event of an active shooter.

Couturier scanned the first-grade classroom of Michelle Chajkowski, noting that her desk was stuck in a corner and did not provide her with any clear sight lines to detect an intruder.

He recommended she move pieces of furniture like bookshelves into spots that will offer the classroom protection from gunfire coming through the classroom door.

"You have to be the eyes for the school," Couturier told Chajkowski."You are sitting here and looking, and this is in your way. You need to see someone walking by with a weapon."

Chajkowski said the entire experience was overwhelming but said she is glad it was happening.

"I've been teaching for 20 years, and at first, there wasn't much real consideration to safety," she said. "I am very glad the district is taking this so seriously. It makes us feel as teachers much more comfortable with our role in keeping kids safe at school."

Patrick Henne, a Springport high school teacher and president of local teacher's union, said he has had his training on the boot system and will be training students over the first weeks and months of school.

Students, depending on grade, will be trained on how the system operates, and in some cases, a student or students could be designated to pull the boot system in the event a teacher is out of the classroom during an actual lockdown.

"There has been a lot of discussion on what to do to protect kids, like arming teachers, and what occurs to me is the best possible solution is to keep people out of the building … and this seems the best way to do that,” Henne said. 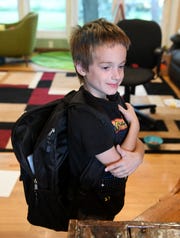 Graham Rockafellow, 6, wears his backpack with the BulletSafe panel inserted at their home in Shelby Township, Mich. on Aug. 21, 2018. The BulletSafe backpack panel is 10 x 14 inches and can be put in a backpack, briefcase or or any other bag. (Photo: Robin Buckson, The Detroit News)

A recent national PDK poll found that 34 percent of parents fear for their child’s physical safety at school compared to 2013 when 12 percent said they were fearful.

One Michigan mother is taking extra steps to protect her child as he heads off to school next month.

For Maya Rockafellow, repeated school shootings across the United States drove her to search at first for bulletproof vests for her 6-year-old son, Graham, who is entering first grade this year in Utica Community Schools.

"What kid is going to want to wear a bulletproof vest to school, and my munchkin is way too small," said Rockafellow, of Shelby Township.

A deeper dive online led Rockafellow to a bulletproof panel that can be slipped into a backpack for protection.

BulletSafe, a Troy company, makes the bulletproof backpack panels for $99. They measure 10 inches by 14 inches and weigh 24 ounces.

BulletSafe owner Tom Nardone said the idea is the panel can be used from kindergarten to college.

"We've sold over 2,000 of them. We have a few hundred dealers, and you can buy on the website," Nardone said. "The sales of the products tend to go in spurts if there is a violent incident."

Rockafellow gave her son the panel to put inside his black school backpack as the two talked about the start of school on Sept. 4.

"I explained it to him. This is like a protective shield ... you can wear it on your back. Being 6, my son likes to wear his backpack on his front. I told him if there are bullets flying, you can use it to defend yourself," Rockafellow said.

"People may make fun of me…but my son is the only one. I just want that little bit of comfort for him there."