According to test results released Wednesday, 44.4 percent of Michigan third-graders scored proficient or higher on the English Language arts test

Despite spotty success in some districts, Michigan's massive, multi-year push to improve literacy among elementary-aged students yielded only slight improvements in third- and fourth-grade reading scores in statewide assessment.

Only 44.4 percent of Michigan third-graders scored proficient or higher on the English language arts test compared with 44.1 the previous year, according to results from the 2018 Michigan Student Test of Educational Progress, better known as M-STEP, released Wednesday from the Michigan Department of Education.

That means a majority of Michigan's third-grade students — 55.6 percent or 56,850 students — scored less than proficient on the test, which measures reading, writing, listening and language. 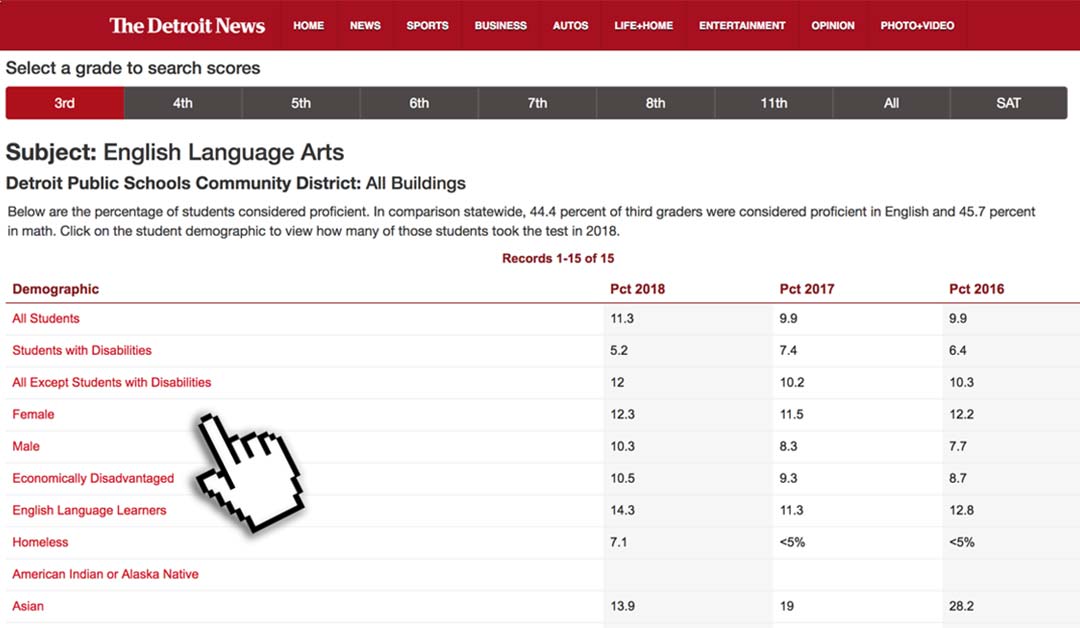 The latest results of statewide testing add to an increasingly dire educational outlook for Michigan. According to analyses of national testing data, Michigan students are performing among the bottom 10 percent of states.

But Jacob said it may be too soon for the state's literacy efforts to show up in third-grade reading scores.

"I don’t think we should take this as evidence that recent efforts are not successful," he said. "I don’t know if they have been, and we won't know for a few more years."

By 2020, under Michigan's reading and retention law, school officials will have the power to retain struggling third-graders if they read a grade level behind on the state’s assessment of English language arts.

How many students could actually be retained under the law remains unknown and unclear going forward, according to state education officials.

The problem, state education officials say, is the M-STEP does not have a specific reading score broken out from the English language arts testing and does not provide a grade level equivalency score, said Andy Middlestead, with MDE's Office of Standards and Assessments.

Asked how many students could be retained in the future based on M-STEP scores, Middlestead said on Monday during a media roundtable he did not want to give out estimates.

"We are working through how to best flag these students," Middlestead said. "ELA doesn't have a specific reading score. We are trying to determine the best route to find an indicator. Kids won't be retained just on test scores."

Michigan lawmakers created exemptions in the retention legislation. They include students with special education accommodations, students with less than three years of instruction in English language learning programs, students who show grade-level proficiency through a portfolio of work and students who perform at grade level on a state-approved alternative assessment.

Officials try to build toward goals

The M-STEP is a combination of Michigan‐educator developed science, social studies and English language arts content and material developed by the Smarter Balanced Assessment Consortium. That makes Michigan’s M-STEP test impossible to compare to other state tests, education officials said.

“The M-STEP is an assessment that is unique to Michigan. It does use test items from a bank of items created by the Smarter Balanced Assessment Consortium,” MDE spokesman Bill Di Sessa said.

But Michigan still has been on a slow decline compared with other states where students are realizing higher academic achievements, education experts say.

In 2017, Michigan third-grade reading scores had the largest decline in a subject area in the M-STEP's three-year history. Meanwhile, scores for fourth-graders increased to 45 percent proficient or higher, compared to 44.2 last year on the English language arts test.

“These are the footholds we need in our ambitious efforts to make Michigan a Top 10 education state in 10 years.”

From a funding level of $108 million in 2012, the state steadily increased spending in the Great Start Readiness Program and has invested over $243 million there in each of the last four years. In addition to hefty investments in early childhood education, the state also is continuing its statewide collaborative efforts to improve literacy.

Science scores from the M-STEP were not part of Wednesday's release after state education officials announced last week they are withholding the public release of science scores for two years because they say the exam is a sample test that does not yet measure student proficiency.

“Huge gaps in learning outcomes are holding back Michigan’s economic vitality, and require policy leaders to not only invest — but to invest more strategically — in dramatically raising literacy levels through new, thoughtful systemic approaches,” said Amber Arellano, executive director of the non-partisan policy, research and advocacy organization, the Education Trust-Midwest.

“What the 2018 M-STEP data does make clear is that troubling achievement gaps persist across the subject areas — including in early literacy,” said Mary Grech, lead analyst of the Ed Trust-Midwest analysis of M-STEP data.

Amanda Price, chairwoman of the Governor’s PreK-12 Literacy Commission and architect of the Third Grade Reading Law, said the emphasized focus on literacy is the right approach.

"Math is not that great. We have a lot of work to do to improve overall," Price said. "You start with literacy. If you can't get the kids reading at grade level, I'm not sure how they can progress on other levels if they can't read test questions. This law is the place to start."

Proficiency for third-grade students at Detroit Public Schools Community District moved to 11.3 percent this year, up from 9.9 percent proficient in 2017. In fourth grade, 11.1 percent were proficient, compared to 10.4 last year.

Scores in math at Detroit schools declined in grades 3, 4 and 7. Eighth-grade math scores inched up to 7.2 percent proficient compared to 6.8 prior.

Detroit school officials said this year's scores should be considered a baseline year for the district because it absorbed students from the Educational Achievement Authority, the majority of which are considered lower performing.

"This year’s district performance combines last year’s EAA and DPSCD performance for the first time. Despite the overall improvement in most areas, the results reinforce the need for the newly adopted K-8 Literacy and Mathematics Curriculum," the statement said.

"It is positive to see slight improvement in various areas due to a greater focus on general school improvement strategies, such as increased monitoring and student data analysis, but our teachers and principals were not equipped with the right training and tools to maximize student performance yet," he said. "The investments we have made to improve teaching and learning will be felt in the classroom during the 2018-2019 school year."

Small class sizes in grades K-2, professional development for every adult in school and close monitoring of students are among the key strategies of successful school districts in Michigan where third-grade students performed in the top five scores in English language arts on the state assessment.

Rich Machesky, superintendent of the Troy School District in Oakland County, said in the last two years, the district has increased professional development for all adults by 100 percent and has eight half-days totally dedicated to training during the school year.

In Troy, 72.8 percent of third-graders scored proficient or higher on the English language arts test compared to 44.4 percent of their peers statewide.

"We believe the end result of that is a better product in the classroom," he said. "Our teachers are highly proficient and are dedicated experts in the classrooms. It's cause and effect. We want the effect to be the best possible."

Novi superintendent Steve Matthews said a key to his district's success in third-grade reading is keeping class sizes in grades K-2 to no more than 22 students. In Novi, 69.5 percent of third-graders scored proficient.

"Individual attention is really important for early readers," Matthews said. "We have reading support staff in each elementary building. We ID kids early and give them support and get them up to speed so they can continue to progress."

State education officials said 99 percent of schools and students took the M-STEP online compared to 80 percent in 2015, the first year the test was first administered.

The M-STEP replaced the 44-year-old Michigan Educational Assessment Program, or MEAP, in 2015.

One school districts is making changes after only 5.6 percent of its third-graders were considered proficient or higher on the English language arts test.

Lisa Key, area superintendent at Bradford Academy, a charter school in Southfield, said the school board and leadership team have decided to merge the elementary and middle school programs into one K-8 program to support students and achieve growth gains.

They have also added an instructional coach, two literacy coaches to focus on K-3 and a reading specialist for grades 3-5.

"This will allow us to better meet student and staff needs and optimize support and resources," Key said. "The students will feel more secure due to the consistency of the program, and they’ll have more flexibility and familiarity with the team."

Third-grade reading
Here’s a snapshot of the largest Metro Detroit school districts that have the highest and lowest number of third-grade students considered proficient in English language arts. Only districts with at least 100 third-graders are included.
Highest:

Randy Speck, superintendent of the Madison Public School District in Oakland County, said his district saw increases this year in grades 4, 6, 7 and 8 in both English language arts and math.

In the last three years, his district — where students have attended elementary school year-round for four years and now middle school students do — has seen increases in grades 3-8 in both subject areas of the test.

Still, Speck said, he and his staff look at scores from a total of four annual assessments, including the M-STEP, to measure how kids are learning.

"When you take all four together, then you really start to have a whole picture at how the child is progressing. I value M-STEP and the info we get from it," Speck said. "I am really proud of the work our teachers are doing and our students are doing. They are working hard, not for a test, but at being great learners."

Last school year, the district had an after-school program for math and English language arts to increase understanding.

"We were hoping for more than what we got in our M-STEP results," Maes said. "Taking a first glance at scores, we didn’t see the bump we wanted to see; it could be the newness of it."

Maes said the curriculum is developed for a 10-month timeline yet students are tested in April and May before teachers can get through all the material.

"Obviously this year, we will be doing a lot more coaching with math teachers to make sure they are effective," Maes said.