At some Detroit schools, toxins in water reached excessive levels

At some Detroit schools, toxins in water reached excessive levels 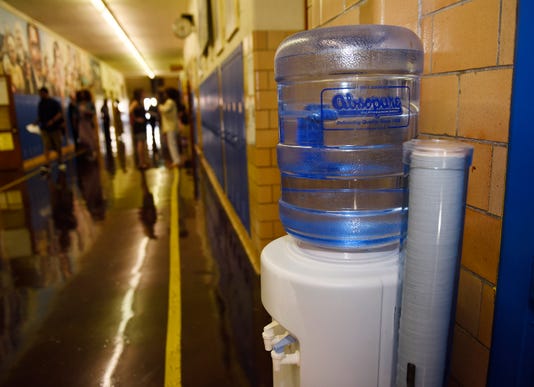 DPSCD has been using water stations and bottled water while the district determines a permanent means to deliver safe, clean water to students.(Photo: Clarence Tabb Jr., The Detroit News)Buy Photo

Detroit — As Detroit's school district develops plans to make drinking water safe inside its buildings, a review of testing data shows one school had more than 54 times the allowable amount of lead under federal law while another exceeded the regulated copper level by nearly 30 times.

The Detroit News reviewed hundreds of pages of water reports for 57 buildings that tested for elevated levels of lead and/or copper in the water to provide a detailed look how excessive the metal levels were in the most elevated sources.

“‎We discontinued the use of drinking water when concerns were identified without any legal requirement to do so, and hydration stations will ensure there is no lead or copper in all water consumed by students and staff," Superintendent Nikolai Vitti told The News in response to the elevated levels.

The findings come as Vitti will announce Tuesday a long-term plan to get drinking water flowing again inside the 106 Detroit schools after faucets were turned off ahead of the school year. On Monday, Vitti said he and the school board will reveal corporate funders for $2 million in hydration stations he wants to install across the district.

Among the elevated levels reported by the Detroit district and reviewed by The News are a kitchen faucet inside Mason Elementary-Middle School that had more than 54 times the amount of lead allowed under federal law; a drinking fountain inside Mark Twain School for Scholars — just to the left of room 204 — that had more than 53 times the federal threshold; a drinking fountain on the first floor near the kitchen of Bethune Elementary-Middle School that had copper levels at nearly 30 times the amount allowed for the metal.

The water testing was initiated and self-reported by the school district. School official still await the test results of 17 more buildings. That means more than half of the 106 schools inside Michigan's largest school district have tainted water.

Reacting to the test results in the Detroit Public Schools Community District, public health and water quality experts say schools should use a tougher standard for lead levels. A lower action level would increase the number of schools with tainted water.

Virginia Tech water expert Marc Edwards said he was not surprised by the high levels in Detroit's schools tested during August because usage is typically not as high as it is during the school year.

"Those are not good. There is no doubt there are worrisome lead levels," Edwards said of the highest readings, though he offered further context: "Whenever you take hundreds of thousands of samples in a school, you are going to get some results that are shockingly high."

U.S. school districts serving 35 million students tested for lead in 2017. Of those, 37 percent found elevated levels, according to the U.S. Government Accountability Office.

At a board of education meeting on Sept. 11, Vitti said the most practical, long-term and safest solution for water quality problems inside the schools is water hydration stations in every building. The systems are used in districts including Flint, Royal Oak and Birmingham, and in Baltimore. The stations cool water and remove copper, lead and other contaminants.

Drinking water screening reports show the water was collected at some schools in April and others in August. Samples from Bethune were collected on Aug. 8. District officials have said water sampling began in the district in the spring and continued through August.

"If testing occurred at a school after the regular school year then it was done during summer school, where nearly 80 of our schools were offering classes," Vitti said.

Vitti also said many of the schools with high levels were already identified for concern in 2016 and were the first group of schools to move to water coolers.

Vitti initiated water testing of the 106 school buildings in May and August after initial tests results showed 16 schools showed high levels of copper and/or lead. Another eight tested for elevated levels in the spring after they were identified with concerns in 2016.

The district on Sept.19 received more test results that showed 33 additional schools had elevated levels, bringing the total number of schools with tainted water to 57 in a district besieged by $500 million in building repair needs. The total number of schools with high levels could increase as school officials await more test results on another 17 schools.

Dr. Mona Hanna-Attisha, a pediatrician and public health expert known for sounding the alarm on Flint's water crisis, agrees that policymakers need to set a much more aggressive limit on allowable amounts of lead in schools.

"This should be the district's action level," Hanna-Attisha said in a letter she co-authored with Elin Betanzo, founder of Safe Water Engineering, a consulting firm. Vitti said he agrees.

"One low single tap sample is not sufficient to clear a tap as a potential source of lead because lead release is sporadic," said Hanna-Attisha, an associate professor of pediatrics at the MSU College of Human Medicine and director of the MSU-Hurley Children’s Hospital Pediatric Public Health Initiative.

"It is not appropriate to use a single low sample that was taken as a follow up to a high sample to conclude that a drinking tap is 'safe to drink,' although this is how many schools have interpreted sampling data."

Parent Tanayna Grant has children who attend Marion Law Academy, which has elevated levels of lead and copper. Law is a school with newer construction and should not be having problems, Grant said.

The district shut the water off at the school for a period last year, Grant said, before it was shut down again in August when Vitti issued the order to close all drinking fountains.

Grant said she is getting her two daughters tested for lead and is encouraging other parents at Law to do the same.

"I am waiting on their appointment. Because of the situation, their doctor's office is backed up," Grant said,

Grant does not think Vitti's water station system solution to address water quality issues across the district is enough.

Dr. Joneigh Khaldun, director and health officer for the Detroit Health Department, said she recommends parents of children 6 and younger be tested for blood lead levels because of the city's history of elevated levels for children, which has been primarily due to lead paint in homes.

Khaldun said the elevated rates in the tests were concerning but declined to elaborate.

"I think, broadly speaking, I support Dr. Vitti in testing every water source in every school," Khaldun said.

"For any school that comes back with elevated lead levels, the actual reasons for that school is not clear. It can be the infrastructure or the drinking fountain. Providing bottled water and other sources is the right thing to do," she said.

According to Michigan health officials, children are at higher risk of harm from lead because their developing brains and nervous systems are more sensitive. Lead can cause health problems for children including learning problems, behavior problems including hyperactivity, a lower IQ, slowed growth and development and hearing and speech problems.

Exposure to copper can cause gastrointestinal symptoms and health problems to some children with pre-existing conditions, health experts say.

Khaldun said she supports creating a state law to require testing of water sources inside schools.

"I do think that is the right thing to do. It’s a complex issue. We need to support testing and mitigation," she said.

Tiffany Brown, a spokeswoman for the Michigan Department of Environmental Quality, said the department supports any schools that want to test and can offer technical assistance and general information on sampling, result interpretation and recommended remedial actions in the event of elevated lead and/or copper results.

In the meantime, students at Detroit schools are getting water from water coolers inside schools. The district is spending $200,000 on bottled water and water coolers for the next several months.

The cost to have stations in every school — one for every 100 students — is $2 million and would include stations in faculty rooms and gymnasiums. The system could be installed in the next school year, he said.

The goal is to deliver clean water, not replace the pipes, Vitti said.

"We are not looking to replace the plumbing. The stations address the issue of older plumbing along with weekly flushing," he said.

The hydration stations that Vitti proposed to use in the schools will have filters to remove lead will improve water quality and increase water use, she said.

"By reducing the total number of water fixtures used for drinking water to a limited number of sources in the school, student water use will be concentrated in these areas resulting in higher water use and improved water quality," she said.