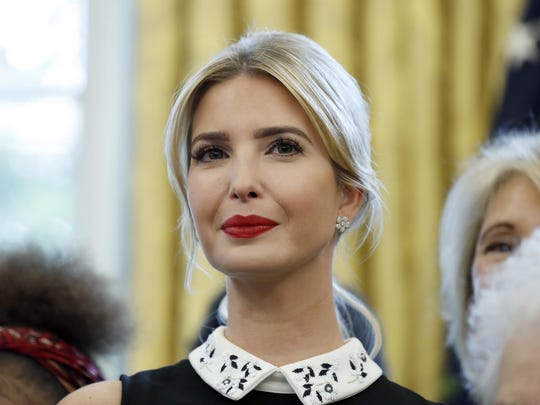 In this Sept. 25, 2017 file photo, Ivanka Trump watches as Donald Trump signs a memorandum to expand access to STEM, science technology engineering and math, education, in the Oval Office of the White House in Washington. The Trump administration on Monday proposed new limits on federal student loans taken out by parents and graduate students as part of a broader plan to curb the cost of college. (Photo: Alex Brandon / AP, file)

The Trump administration on Monday proposed new limits on federal student loans taken out by parents and graduate students as part of a broader proposal to curb the cost of college.

White House officials included the plan in a list of suggested changes to the Higher Education Act, a sweeping federal law that governs student lending. The legislation is getting its first overhaul from Congress in more than a decade.

Ivanka Trump, the daughter and adviser of President Donald Trump, unveiled the plan at a meeting of the National Council for the American Worker, an advisory group that Ivanka Trump helps lead.

“We need to modernize our higher-education system to make it more affordable, flexible and outcomes-oriented, so all Americans, young and old, can learn the skills they need to secure and retain good-paying jobs,” Ivanka Trump said on a call with reporters.

A primary goal of the proposal is to curb the growth of college tuition rates and reduce the nation’s student debt load, which has reached nearly $1.5 trillion and has more than tripled since 2003.

The White House’s proposed solution is to cap federal loan programs available to students’ parents and to graduate students. The plan doesn’t propose specific limits, but officials suggested it could vary based on academic program.

Underpinning that idea is a belief that colleges are largely responsible for the nation’s debt woes. The White House says easy access to federal aid has led colleges to drive up prices, adding that they are “unable or unwilling” to make education more affordable.

Colleges often argue they have been forced to raise tuition to make up for reduced funding from their states. Many Democrats have echoed that position, with some calling for greater government support for schools.

Borrower advocates said they welcome attention to the topic but don’t think the White House plan will help. Federal loans for students’ parents and graduate students total about $25 billion a year, compared to $151 billion in total federal student loans.

James Kvaal, president of the nonprofit Institute for College Access & Success, said the plan takes the wrong approach, adding that there’s “no evidence” the availability of federal loans has led to higher college costs.

“The solution is to invest more in Pell scholarships for low-income students, to work with states to make public colleges and universities more affordable,” said Kvaal, who is also a former policy adviser to President Barack Obama.

White House officials say they also want to simplify the loan repayment process, a goal shared with Sen. Lamar Alexander, R-Tenn., who chairs the Senate committee overseeing education and is leading the push to update the Higher Education Act.

Lamar said it is “helpful” to have the White House’s perspective as he works with Democrats on the overhaul.

“I share the administration’s goals to make a college education worth it and to make it simpler to apply for federal student aid and pay back student loans,” he said.

Several items on the White House’s wish list were also included in the Education Department’s budget proposal for next year, including the elimination of public service loan forgiveness, a program that can erase debt for certain borrowers after 120 months of repayment.

Instead, the White House says all federal borrowers should get undergraduate debt wiped clean after 180 months of repayment.

Education Secretary Betsy DeVos praised the White House plan as “an important roadmap for working with Congress to rethink higher education and pass meaningful reforms.” She added that legislation to simplify lending “should be passed immediately.”

The White House is also asking Congress to make federal Pell grants available to be used in short-term certificate programs, and to take other steps intended to help workers gain skills outside of traditional colleges and universities.

“The higher education system has been slow to adapt to the changing nature of work,” the White House said. “Millions of jobs remain unfilled in part due to a lack of Americans with appropriate skills.”

Congress is still in the early stages of its work to reauthorize the Higher Education Act. Alexander has made it his mission to update the legislation before he retires in two years. The law, originally signed in 1965, received its last major update in 2008.