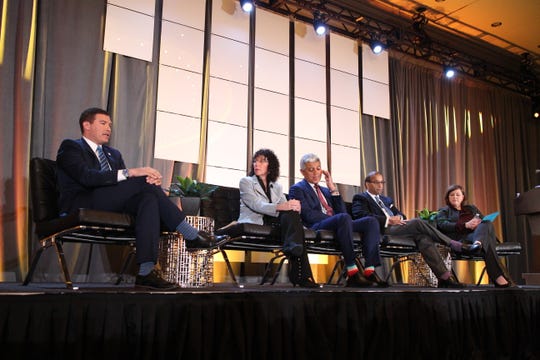 Students who attended but did not graduate from three Metro Detroit higher education institutions will have the chance to cash in on a new debt forgiveness program to go back to school.

The program, led by the Detroit Regional Chamber, is for the 693,000 adults across southeast Michigan with college credits but no degree and is aimed at improving the region's postsecondary attainment rate from 44%. It is one of the first multi-institutional regional debt forgiveness programs in the country.

"We have a large number of adults who started but never got a degree," said Greg Handel, the chamber's vice president of education and talent. "A large percentage stopped because they had financial issues. We thought we would convene this partnership to try and improve the educational outcomes for the region."

Students who enrolled at any of these three institutions and remain current on their new higher education financial obligations when they enroll to make progress toward a degree or certificate are eligible. The universities also require that former students have no more than $1,500 in debt, though there are other programs and resources to help them get to that point.

There is no cap to the number of students who can participate. Once accepted, students can choose to enroll at any of the three institutions and still receive the debt relief, which is funded by the participating colleges and universities.

Wayne State's Warrior Way Back program launched a pilot version last spring to more than 12,000 former students with the Kresge and Lumina foundations' designation of Detroit as a "talent hub" to help the Detroit Regional Chamber's goal of growing postsecondary attainment to 60% by 2030.

More than 100 students signed up to participate, and nine graduated after one semester with another 13 expected by August. Now, universities, colleges and governments in Boston, Illinois, New York, Texas and other cities and states are looking to Wayne State as an example, said Dawn Medley, WSU's associate vice president of enrollment and management who designed the program.

"If a student owes a past-due balance, they can't register for a subsequent semester, and they can't take their transcript somewhere else," Medley said. "They're basically locked out of higher education. ... I think it's awesome that these schools that typically compete for students understand the importance of education for economic development."

Oakland University's Golden Grizzlies Graduate program will launch in July. In addition to debt forgiveness to former students, it will provide $500 microgrants per semester up to three semesters to former students without debt who did not complete a degree and to current juniors and seniors at risk of leaving before graduation.

Since 2013, 8,300 students have left behind an unfinished Oakland degree. The university estimates 5,570 have not attained any postsecondary degree or certificate.

"This is a way for us to offer a holistic approach complete with financial grants and financial resources to make sure all students have the opportunity to reach their potential by achieving their bachelor's degree," said Dawn Aubry, Oakland's associate vice president for enrollment management.

The new program also introduces long-term debt forgiveness to Henry Ford. Between 2013 and 2017, more than 83 percent of students participating in one-time loan forgiveness programs at the school persisted through at least one semester, and more than 50 percent completed a credential at the college or transferred to another institution to pursue additional education.

Henry Ford has about 11,600 former students without a degree who owe it money, On average, those students owe $500.

"The state of Michigan needs tens of thousands of people in skilled trades and other workforce areas," said Rhonda DeLong, Henry Ford's marketing and communication director. "We don’t want to hinder people getting the education to get them a better job."

Those interested in the debt relief programs can go to www.detroitdrivesdegrees.com/comeback for more information.