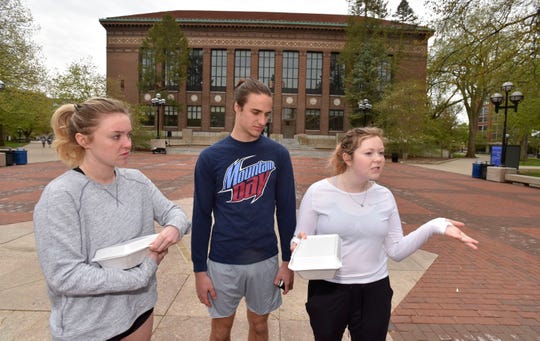 Grace Fanning, left, of New Jersey, Jason Knopf, of the Chicago area and Meg Wynne, of Indianapolis, talk about school debt on the Diag on the main campus of the University of Michigan in Ann Arbor. (Photo: Todd McInturf, The Detroit News)

Ann Arbor — Going into her junior year at the University of Michigan, Meg Wynne already has $20,000 in debt.

"It's scary because you're not always thinking about how it adds up," said the 20-year-old from Indianapolis. "But it can add up fast."

The average student loan debt at  four-year Michigan colleges and universities increased on average by 52% — more than $10,000 — between 2007 and 2017 to $30,204, according to the first report of its kind from LendEDU, an online student loans marketplace.

With those debt loads following students for years after graduation, it means 18-year-olds are making one of the biggest financial decisions of their lives, said Kelly Peeler, a former JPMorgan analyst and CEO of Money Mentor, a financial advice platform for Generation Z, the current crop of college students.

"Student loan payments are the crux of the financial identity of Gen Z," Peeler said. "There are indications that Gen Z might not be able to own homes in the future. They might not be able to have children to the capacity that millennials did because they are paying $350 per month. For the baby boomers, that was going to their mortgages."

According to the report, UM students had the smallest debt increase in the state in the last decade. Average debt rose by 8.25%, or nearly $2,000, to $25,712, which also was the lowest average student debt of the 26 Michigan colleges and universities who voluntarily submitted their financial aid data to research firm Peterson's that LendEDU used.

A few of the Michigan colleges on the LendEDU list disputed whether the report accurately reflected their students' financial burden, including Grand Rapids' Kuyper College. LendEDU later removed the school from the list.

Although the percentage of graduates with loan debt in Michigan decreased slightly in the past decade, more than half of the Michigan institutions saw their average debt jump more than 40% in the decade, including nine public schools. At Michigan Tech and Aquinas College, students' debt on average more than doubled, according to the report. Only UM's average student debt was in single digits.

The Ann Arbor campus' increase was the 80th smallest by percent nationally. The number of students graduating with debt at UM also decreased, falling by 5% to 41%. Tuition and fees are around $16,000 per year for in-state residents and approximately $50,000 for out-of-state students.

Derek Suo, a 21-year-old senior from West Bloomfield Township whose parents are funding his education at UM, said he wasn't surprised students at his school had such little debt. "There are many students whose families are well-to-do here," he said. "I'm thankful I won't have to worry about that when I graduate."

In-state student loan debt last year averaged $23,255, lower than in 2013 but slightly more than a decade ago, UM spokeswoman Kim Broekhuizen said in a statement. The university has worked to limit loans in financial aid, especially from families with an annual income of less than $40,000.

Last year, it also launched its Go Blue Guarantee program to fully fund up to four years of tuition and fees for in-state students whose families make $65,000 or less and have assets below $50,000. 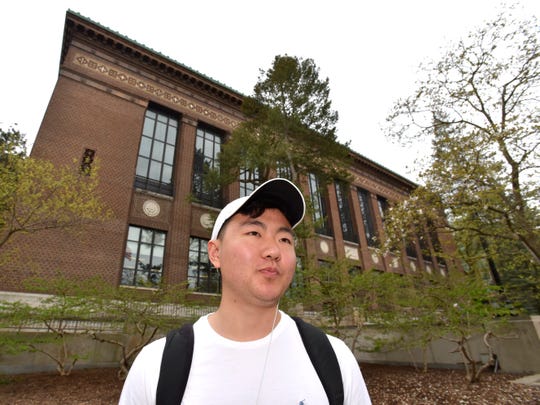 University of Michigan student Derek Suo, of West Bloomfield Township, said his parents are funding his degree. Unlike so many debt-ridden students, "I'm thankful I won't have to worry about that when I graduate." (Photo: Todd McInturf, The Detroit News)

Students at Michigan Technological University in the Upper Peninsula's Houghton had the largest increase in debt, according to LendEDU. Theirs rose nearly 152%, or $21,611, moving from the lowest in Michigan to the fourth highest. Tuition and fees are $15,646 for Michiganians and $33,726 for non-state residents.

The public university did not report external or private loans 2007-09, which skewed the 2007 average, said Joe Cooper, director of Michigan Tech’s student financial services center. Since 2009, average debt has increased 36%, he said.

Contributing to tuition increases and rising debt, though, he said, is state appropriation. If inflation is taken into account, state dollars to the university have decreased by 28% since 2002, while enrollment has grown by 10%, Cooper said.

"We're all used to doing more with less," he said. "We've tried to be very intentional with financial aid to make sure education is accessible. Over the last five years, there's been an increase of only 1% in terms of student debt accumulation."

Average debt at Southfield's Lawrence Technological University increased by more than 11%, the least of Michigan's private institutions. Graduates with debt, however, increased by 11% to 69%. Tuition and fees are $35,280 per year there.

The university has grown its traditional undergraduate population from 300 residential students in 2001 to 1,200 now, contributing to the number of students with debt, said Lisa Kujawa, associate provost for enrollment management and outreach.

The school, however, seeks to live up to its founding documents that sought to establish an educational institution without finances getting in the way of its students, she said. It has increased tuition 1-3% per year and its financial aid contributions to $19 million per year.

"I'm not going to apologize for our tuition," Kujawa said. "We provide a great education, and their return on investment is exactly that based on how much they make and how great of a job that they get after."

Lawrence Tech offers five-year programs from which students can graduate with master's degrees. It often extends scholarships to cover that fifth year. Partnerships with 25 area high schools offer dual enrollment opportunities under which students get a 50% discount on their tuition if they continue at LTU. Three years ago, it began partnering with RaiseMe, a website that connects high school students with participating institutions to earn scholarships for goals such as getting an A in a class.

Through Educating Planning Resources, a private firm based on campus, the university also offers free financial counseling to students and parents.

A change in the federal loan marketplace may also have contributed to changes in student debt, Kujawa said. In 2010, the U.S. Education Department took over all federal student loans, a move the government estimated would save it $61 billion over a decade and offer lower interest rates in some cases. Previously, private-sector lenders could receive a federal subsidy for making government-guaranteed college loans.

Albion College, west of Jackson, reported the highest average student debt in Michigan of $44,140, a more than 74% increase from 2007. It, however, was well shy of the $70,361 average at the Parsons School of Design in New York, which has 5,500 undergraduate and graduate students.

Albion's 2017 average student debt appears to have been skewed by a few students who did not qualify for need-based or institutional-based aid, said Rob Kniss, student financial services director at the school of approximately 1,500 students. The median debt for 2017 was around $30,000, he said. And in 2018, average debt fell to $40,347.

"2017 was more of an anomaly," Kniss said. "These 15-20 students have families who are more well-off. Those are the families that tend to borrow more through private alternative loans." 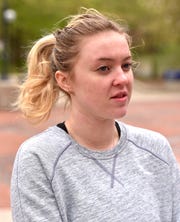 Grace Fanning, of New Jersey, talks about school debt on the Diag on the main campus of the University of Michigan in Ann Arbor. (Photo: Todd McInturf, The Detroit News)

He added that Albion's $48,090 tuition and fees sticker price is often not what students pay, as the school provides discounts based on need. It offers payment plans and conducts financial literacy training during its first-year seminars, too.

The increase also appears to have had little if any effect on enrollment, Kniss said; Albion has grown from a low of 1,200 students in 2007.

UM junior Grace Fanning, 19, of New Jersey has not taken out any debt yet, but she has family and friends who are going to take years to pay off their loads: "It's definitely not a good system. They're stuck."