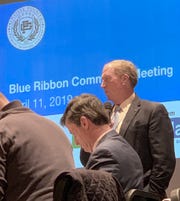 Grosse Pointe — School officials in the Grosse Pointe Public School System are delaying a planned vote on possible school closures and reconfiguration of the district until June 24.

The Board of Education had scheduled a vote for Monday on proposals that involve closing elementary schools in the district to rightsize buildings amid declining student enrollment and to move all fifth-graders to the middle schools.

Superintendent Gary Niehaus said on Thursday the vote is being rescheduled after the Michigan Civil Rights Commission asked for more time to compile and send him input from four listening sessions with community members about the changes.

The district is expected to name the schools it wants to close and will vote on several resolutions.

The discussions to close schools comes after 15 years of declining enrollment and a move to right-size the district without opening its doors to Schools of Choice students.

Declining K-12 enrollment has translated into financial losses for the affluent Metro Detroit district, school officials said. With each student equal to around $10,000 in school revenue, the district's average 100-student drop per year is $1 million lost.

Grosse Pointe's schools are not alone. Statewide K-12 student enrollment has been on the decline for years. Enrollment is forecast to drop another 10% through 2025 in southeast Michigan.