Lansing — A charter school advocacy group is accusing the Michigan Department of Education of "illegally" hiding performance data it is supposed to be using to create an A-F accountability system for schools.

The department was required by law to publish  A-F letter grades for each school in the state by Sept. 1. It has yet to produce the letter grades but informed state lawmakers in April there would be a delay due to a lack of resources and staff. 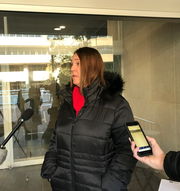 Beth DeShone of the Great Lakes Education Project speaks ahead of a meeting of the Michigan Board of Education on Tuesday, Nov. 12, 2019, in Lansing, where she delivered a 2,800-page report grading Michigan schools on a new A-F scale. (Photo: Beth LeBlanc/The Detroit News)

The Education Department has had nearly nine months since the law’s passage to prepare the A-F grading system, said Beth DeShone, executive director of the Great Lakes Educational Project.

“Our children receive report cards every quarter and we celebrate their successes and we provide support to them when they need help,” DeShone said Tuesday. “Why we should not expect that for our school buildings in our state is beyond me.”

On Tuesday morning, DeShone who heads up the conservative-leaning group founded by U. S. Secretary of Education Betsy DeVos and her husband, Dick, is expected to provide the state Board of Education with a copy of a new school performance report by GLEP that will include A-F letter grades for state public schools using 2017-18 School Index data.

DeShone said it took a handful of her staff 20 hours to do the work, "demonstrating how simple it would be for the department to comply with — not break — state law."

In August, the Michigan Department of Education told The Detroit News it would not meet the Sept. 1 legislative deadline to issue A-to-F letter grades to public schools because designations in the system will be calculated using data from the 2018-19 school year, which are not available until after Sept. 1.

Department of Education spokesman Martin Ackleysaid the department notified the Legislature in the spring and projected it would not be ready to publish A-F grades until March 2020.

Ackley said Tuesday he had not yet reviewed GLEP’s report, but he recommended parents wait for the department report in March or review the department’s existing school data online.

The state Board of Education spent more than an hour Tuesday discussing and voting on the methodology that would be used to grade schools in each of the required categories, including proficiency, growth, English learner progress, graduation and comparison.

The board approved systems that will be used for assessment participation and English language progress in A-F. It will consider the remaining categories at later meetings.

“The board is well aware of the peril of the definition,” State Superintendent Michael Rice said about the A-F assignments. “We believe strongly in providing all of this information publicly, we do through the parent dashboard. … This is not about transparency at all. This is about putting a label, or a series of labels, on top of that transparency.”

The Legislature’s original budget for the Department of Education meted out funding on a quarterly basis, contingent in part on the department’s compliance with the new A-F law, which requires the state to rate K-12 schools on various metrics and hand out A-F letter grades for parents to review.

The language also included an acknowledgement of the March 2020 timeline, Ackley said.

The language was among the 72 budget items Gov. Gretchen Whitmer ruled unenforceable when she signed the budget in October. She later used the State Administrative Board to transfer money within the department to ensure it had adequate annual funding instead of quarterly installments.

The Education Department has been "extremely transparent" with the Legislature regarding the delay in implementation, which is due to a lack of additional staff and resources to tackle the "complex details" of the new system, said Chris Wigent, executive director of the Michigan Association of Superintendents and Administrators.

"We are aware that MDE is committed to complying with this legislation in March, 2020 and has communicated that to the legislature," Wigent said. "It is clear that GLEP is attempting to stir the pot on this issue and we can only assume that the timing is based on political positioning."

Michigan will have two separate accountability systems for its K-12 schools, which is the result of lame-duck legislation conflicting with federal education law.

Each system will operate independently of the other, Ackley said.