The center will have natural light, interior courtyards and a natural playscape designed around existing oak trees 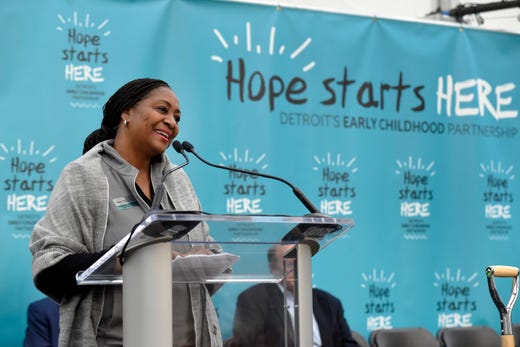 La June Montgomery Tabron, co-chair of Hope Starts Here and the President & CEO of the W.K. Kellogg Foundation, addresses the crowd during a groundbreaking ceremony for the early childhood center at Marygrove College, Friday in Detroit. Jose Juarez, Special to Detroit News
Fullscreen 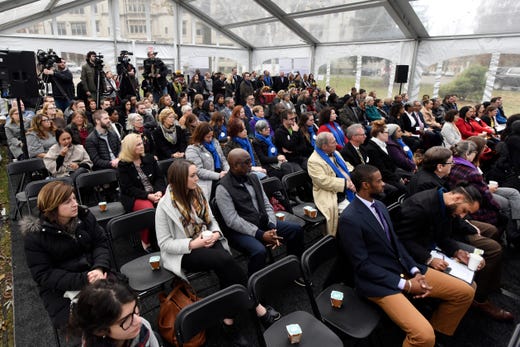 Officials from the Marygrove Conservancy, the Kresge Foundation and the W.K. Kellogg Foundation, as well as Detroit families, used big and little shovels to celebrate the groundbreaking for the new 28,000-square-foot childcare center, which is expected to open in the fall of 2021.

The center is part of the Marygrove Conservancy’s "cradle-to-career" vision for the 53-acre campus, which will lose Marygrove College when it closes at the end of the year.

Plans call for the center to have natural light, interior courtyards and a natural playscape designed around existing oak trees. The center will include 12 classrooms, a library and health therapy rooms.

Kresge president Rip Rapson said on Friday the foundation's investment is predicated on the need for a full spectrum of high-quality education opportunities in the city's neighborhoods.

"The groundbreaking we celebrate today sends an unequivocal message that Detroit's future will rise of fall on our ability to provide pathways to success for all the city's children," Rapson said.

At the event, Detroit Mayor Mike Duggan said every child in the city deserves a high quality education that starts with access to early childhood education programs.

"This new educational model at Marygrove has tremendous potential and is going to be watched very closely," Duggan said. 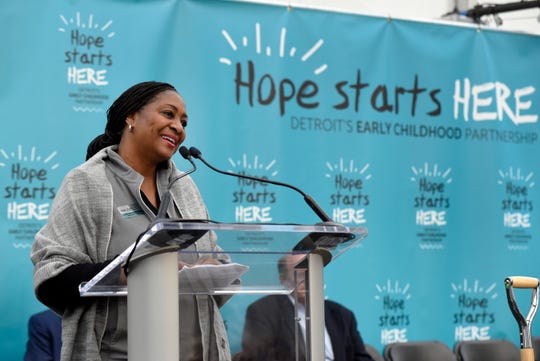 La June Montgomery Tabron, co-chair of Hope Starts Here and the President & CEO of the W.K. Kellogg Foundation, talks Friday about early childhood education during a groundbreaking ceremony for the center at Marygrove. (Photo: Jose Juarez, Special to Detroit News)

The mayor also said he "thinks" he has the support of Gov. Gretchen Whitmer and state lawmakers to fund universal preschool as it looks to invigorate its outer neighborhoods.

"I think we have support from the governor, the Senate Republicans and the House Republicans to fund for next fall universal preK for every 4-year-old in this city," Duggan said. "If they can just pass a budget, I'm quite certain we will be in it. I want you to watch for this."

The event kicked off the day-long Hope Starts Here 2019 summit at Marygrove, which is expected to bring hundreds of Detroiters together to work to create a coordinated, high-quality early childhood education system in Detroit.

“Having an early childhood system that is not only responsive to the needs of families but is coordinated and accessible is critical to creating hope and change,’’ Smith said. “We have all the right pieces in Detroit to make it happen.

“The fact that 28,000 Detroit children lack access to quality childcare is just one measure of how far we have to go."

The early childhood center is part of a transition for the campus that will also include a new K-12 school and a teacher-education training program with partners that include the Detroit Public Schools Community District, the University of Michigan, the Kresge Foundation and Starfish Family Services.

In September the Detroit school district opened the School at Marygrove to 120 incoming ninth-graders as its inaugural class in the campus Liberal Arts Building. Grades will be added incrementally until the school becomes a full K-12 institution.

The initiative, called the P-20 Partnership, is backed with a $50 million commitment from the Kresge Foundation.