UM president on black enrollment: 'We've got a lot more work to do'

Speaking during a virtual town hall Mark Schlissel says, "We need to be smarter about ways to grow the black student population"

UM president on black enrollment: 'We've got a lot more work to do'

The University of Michigan acknowledged its campuses are not immune to systemic racism, and president Mark Schlissel said one solution is recruiting more prospective black students.

Schlissel made the remarks in a one-hour virtual town hall broadcast Friday on YouTube.

"We need to be smarter about ways to grow the black student population," he said. "We need to develop better ways to identify and mentor talented kids who want to go to college and can see themselves here." 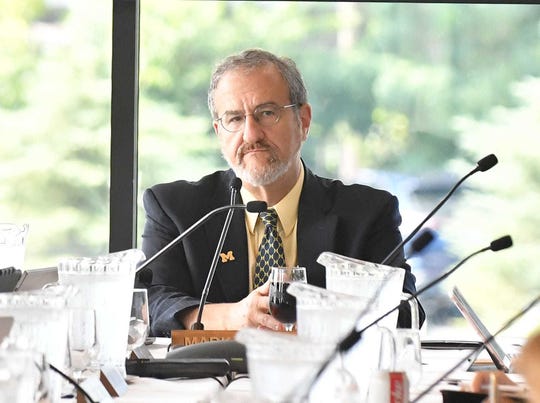 Schlissel said Michigan's black population has declined by "about half" since the state's passage in 2006 of Proposal 2, which banned affirmative action. The U.S. Sixth Court of Appeals overturned the Michigan Civil Rights Amendment in 2014, but the U.S. Supreme Court upheld the amendment in 2014.

The pathways program, explained UM spokesman Rick Fitzgerald, is a college-prep effort offered year-round to students from seventh to 12th grade in those communities. People who successfully complete the program, and get into Michigan, are granted a four-year tuition scholarship.

The programs exist in majority-black communities but are open to any student within those districts. It's a means of bringing the university to the student, and getting young people to understand that college is an option, he said.

The program requires a 2.8 GPA in core classes and a 3.0 GPA overall.

According to data provided by UM, as of summer 2019, 176 scholars have graduated from the program, with 86% of Wolverine Pathways graduates enrolled in college.

In its first four years of the HAIL Scholarship program, 1,088 high-achieving, low-income students from 73 Michigan counties have enrolled at UM-Ann Arbor after being awarded scholarships, Fitzgerald said.

The town hall, titled "Constructive Conversations for Societal Change," was in response to the death of George Floyd, the Minneapolis man who died while detained by four police officers, sparking protests in dozens of cities throughout the country, including Detroit.

"This is just the beginning of the conversations," Sellers said.

Several university officials in Michigan, including some high-profile coaches and athletes, have issued statements in support of the Black Lives Matter movement.

Schlissel issued his first statement May 29, saying: "Michigan has a critical role to play and obligation to lead the kind of changes in our society that we all want to see. ... Our collective future depends on it."

Schlissel said identifying and recruiting minority students is essential — though he acknowledged that could get tougher in the coming years, given an economy in shambles in the wake of the COVID-19 pandemic — but Michigan's efforts can't end there.

He also said the university needs a better living experience for minority students on campus, as well as more minority professors, and the professors it does have should take mandatory training classes on race, like they do on issues of sexual misconduct.

"We were talking about these (race issues) five years ago, so that's part of the frustration," said Schlissel, who plans a cultural diversity survey like done several years ago. "Maybe they're getting better around the edges, but we've got a lot more work to do.

"The buck stops with me and the board and it requires the help of a lot of people."