Lawsuit to shut down summer school refiled in Wayne County

Lawsuit to shut down summer school refiled in Wayne County

An attorney seeking to shut down summer school in Detroit refiled the case Monday in Wayne County Circuit Court and wants the district to send an emergency alert to families about COVID-19 testing.

Shanta Driver, an attorney for a group of students, parents and teachers in the Detroit Public Schools Community District, said the lawsuit is now asking for the court to order the district to send an emergency alert to families of summer school students to urge them to get their child tested for the virus.

"Because of the dangers involved," Driver said.  "Every day there is new information about children and the threat of the virus."

Driver has requested an emergency order shutting down Detroit school buildings to summer school classes. There was no decision on that request as of 1 p.m. Monday.

The case has been set for a hearing Sept. 19.

Driver is suing the district, Vitti, Gov. Gretchen Whitmer and other state officials to close school buildings to summer school classes due to the increasing number of COVID-19 cases.

Driver sued the district and Vitti in the Michigan Court of Claims on July 15 but on Friday voluntarily withdrew the case there. Driver's lawsuit against Whitmer and other state officials remains in the Court of Claims and is reset for July 27.

Driver said the lawsuit seeks to stop classes in Detroit immediately, not to reopen schools until the science says it is safe to do so and for Whitmer to issue an executive order eliminating all summer school programs across the state until it is safe to operate them.

Summer school started for district students on July 13. Summer classes are scheduled for four hours Monday through Thursday. The summer semester will end Aug. 6. The district has said that summer learning is on a voluntary basis for students and teachers.

The lawsuit alleges the district, in its decision to hold in-person summer school this week, is "showing no concern" for the lives of students, teachers and families and will "refuel" the resurgence of COVID-19 cases in Michigan and nationally.

Vitti has said the district's reopening plan for summer school is aligned with guidance from the federal Centers for Disease Control, recommendations from the governor's Return to Learn Council's Roadmap and national teachers union guidance.

In legal briefs, attorneys for Detroit public schools and Whitmer are asking for the case to be dismissed.

Elizabeth R. Husa Briggs, an assistant attorney general who represents Whitmer and other state defendants, said no state official is involved in any decision or action related to summer school operation or the claims made in the case.

"The decision to reopen schools for in-person learning is a local decision, subject to compliance with the provisions of Executive Order 2020-142," Briggs writes in her brief to have the case dismissed. 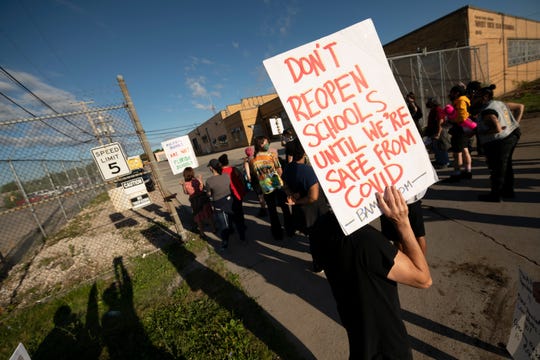 Demonstrators block the driveways of the Detroit Public Schools West Side Bus Terminal to keep school buses from running on the first day of summer school, in Detroit, July 13, 2020. Concerns about COVID-19 and a lack of safety measures prompted the protesters to demand that schools close. (Photo: David Guralnick, The Detroit News)

Police on Thursday arrested at least 11 protesters who tried to block buses from picking up Detroit students, the fourth day of demonstrations against voluntary summer classes during the coronavirus outbreak.

The district began offering online or in-person instruction to students on Monday. Students and teachers must wear masks, and class sizes are smaller to reduce virus risk.