Ecologists rushed to close the Asian carp's back door to the Great Lakes.

When ecologists realized that a marsh near Fort Wayne, Ind., could be the Asian carp’s back door into the Great Lakes, they rushed to close it.

Rainfall amounts as high as 7 inches in parts of northern Indiana last week did not pose a threat to the 1.7-mile berm completed in late 2015 to separate the Midwest's so-called continental divide through the Eagle Marsh. But the floods did serve as a reminder that the berm was needed and reinforced that the path's discovery came just in time.

"The berm is working," said Betsy Yankowiak, director of preserves and programs for the Little River Wetlands Project in Fort Wayne. "This is a rain event where the waters would be comingling... These annual events, this is one of the reasons we needed that berm."

Asian carp are considered one of the greatest threats to the $7 billion Great Lakes fishery industry. They have transformed the ecosystems in areas they've infested, including the Mississippi River, since being introduced in the South.

The primary threat for Asian carp entry to the Great Lakes remains through the man-made Chicago Sanitary and Ship Canal. A series of electric barriers are designed to deter further migration, but an Asian species evaded the barriers and was caught in June just miles from Lake Michigan.

That a small stretch of land at Fort Wayne, nearly 100 miles from both lakes Michigan and Erie, could provide the second best path into the Lakes might not have been considered if not for a chance encounter in December 2009. It was just six months before spawning populations of the invasive species were found in the Wabash River.

In a town of 2,000 people 30 miles south of the Michigan border, Yankowiak was making a presentation at an Indiana waterways conference when a state official showed up.

"It was 20 miles up the road, so I thought OK, I'll go in and sit in and see what's going on," said Jed Pearson, a fisheries biologist for the Indiana Department of Natural Resources.

Yankowiak was relatively new to her position, which would lead the restoration of an Indiana wetland, drained for farming in the 1800s, back into a marsh.

"I got to thinking," he said, "if you're creating a lot more wetland areas, you're just possibly increasing the pathways where they can get to the Eagle Marsh, and during times of high water they might get across."

"I was bragging about how cool the Eagle Marsh was because we held the floodwaters from both the Great Lakes and the Mississippi River systems," she said. "And someone raised their hand and said, 'Does that mean that it could be a way for Asian carp to get into the Great Lakes?'

Pearson explained the threat to her.

"Less than 10 months later, I had a 1,200-foot-long 10-foot high chain link fence across the nature preserve that I manage," Yankowiak said.

That was just the start of the barrier, which through extraordinary cooperation was completed in December 2015 at a cost of $4.4 million. And it was less than three weeks old when it got its first test.

The berm does have a weak spot -- a 300-foot gap that allows the comingling of waters in the event of a 50-year flood so as to prevent flooding of neighbors in the area. It is covered with a chain-link barrier with 2-inch openings to prevent mature fish from passing through. 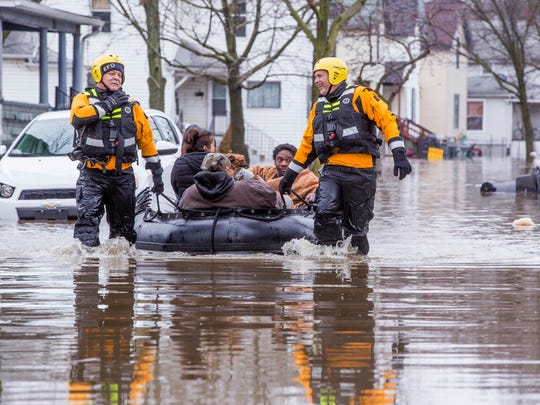 Inspection of the berm happens at least monthly to make sure that wildlife haven't weakened or penetrated it, and it's built in such a way that turtles and other species, not to mention humans, can easily move across. So far, it has needed only minor repairs.

"We do that monthly check and we go through in a flooding event. Our steward walks through every day," Yankowiak said. "We're very active, and it's holding strong."

The U.S. Army Corps of Engineers, through a spokesman in Detroit, confirmed that although parts of Michiana are badly flooded, Fort Wayne's rainfall was not as bad as forecast and is not considered a threat to the berm.

Pearson, the fisheries biologist who made the connection back in Albion, Ind., thinks that the back door has been closed.

If Asian carp reach the Great Lakes, experts are confident it won't be through Eagle Marsh. Yankowiak looks forward to even more progress.

"I talk about when we can tear down this wall," she said, which could only come after eradicating the Asian carp threat. "I want to see it in my lifetime. It would take everybody working together."