Ol Pejeta, Kenya – Wildlife experts and veterinarians said Friday there is hope to prevent the extinction of the northern white rhino because they successfully extracted eggs from the last two remaining females of the species. The eggs will be used to reproduce the species through a surrogate.

The groundbreaking procedure was carried out Thursday on the northern white rhinos known as Najin and Fatu who cannot carry a pregnancy. The joint effort by the Leibniz Institute for Zoo and Wildlife Research, Avantea, Dvur Králové Zoo, Ol Pejeta Conservancy and the Kenya Wildlife Service saw a team of vets successfully harvest a total of ten eggs from the rhinos. The eggs are to be artificially inseminated with frozen sperm from a northern white rhino bull and then transferred to a southern white rhino surrogate mother. 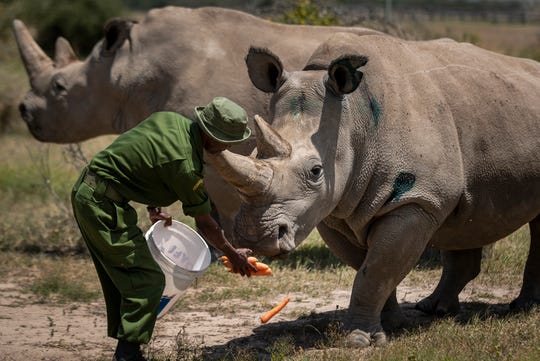 Wildlife experts and vets say there is hope for the northern white rhino which is on the verge of extinction, after they successfully managed to draw eggs Thursday from the last two of the species, hoping they can be used to reproduce the species through a surrogate. (Photo: Ben Curtis, AP)

“We were hoping to get a few eggs from them and our expectations have been exceeded by getting five … from each,” he said.

The death of the world’s last male northern white rhino, Sudan, in March 2018, did not end efforts to save a subspecies of one of the world’s most recognizable animals. The focus turned to his stored semen and that of four other dead rhinos, as well as the perfection of in vitro fertilization techniques and the critical need to keep the remaining two females alive.

The 45-year-old Sudan, who won widespread affection in 2017 with his listing as “The Most Eligible Bachelor in the World” on the Tinder dating app in a fundraising effort, was euthanized after age-related complications.

The ultimate goal is to create a herd of five to 15 animals that would be returned to their natural habitat in Africa. That could take decades.

Sudan was the last of his kind to be born in the wild, in the country that is his namesake. He was taken to the Czech zoo and then transferred to Kenya in 2009, along with the only other remaining northern white rhinos, the two females and a male who died in 2014.

They were placed under 24-hour armed guard and fed a special diet. However, despite the fact that they were seen mating, there were no successful pregnancies.

Rangers caring for Sudan described him as gentle and, as his condition worsened in recent weeks, expressed sadness over his death.

Other rhinos, the southern white rhino and another species, the black rhino, are under heavy pressure from poachers who kill them for their horns to supply illegal markets in parts of Asia.