Ski racing community starts to back away from toxic wax

Ski racing community starts to back away from toxic wax

Montpelier, Vt. – At ski races across the United States, competitors are starting to abandon a type of wax many count on for speed amid concerns it contains potentially hazardous chemicals that threaten human health and could reach streams and other critical groundwater sources.

The International Ski Federation, the governing body for international skiing, announced plans to ban the use of fluorinated waxes in all disciplines next season.

Those waxes contain perfluoroalkyl and polyfluoroalkyl substances, collectively known as PFAS. They are commonplace in the environment and have been linked to a growing list of health problems. 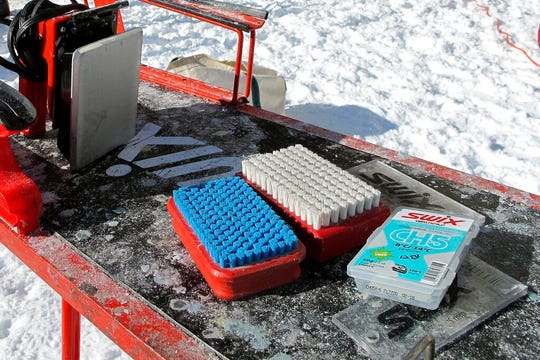 This Feb. 8, 2020, photo shows a waxing table at a cross-country ski race at U-32 Middle & High School in East Montpelier, Vt. The ski racing community is starting to back away from the use of certain waxes that contain chemicals that pose threats to human health and impact the environment. (Photo: Lisa Rathke, AP)

Nordiq Canada, the governing body for cross-country skiing in Canada, also prohibited high and medium fluorinated waxes in most cross-country races this season. The Norwegian Ski Association, meanwhile, banned the use of fluorinated glide wax – used in both classic and skate skiing – for all athletes under age 16 two years ago.

That leaves skiers to use hydrocarbon waxes on their skis.

“I’m very happy with the decision not to use it,” said Sverre Caldwell, director of the SMS T2 team of elite cross-country ski racers, including U.S. Ski Team members, based at Stratton Mountain in Vermont. “For two reasons: one is the potential danger and the other is, anything that kind of evens the playing field is good to me. It should be the athletes racing, not the skis racing.”

The move to shift away from those particular waxes goes well beyond the professional circuit and the skiers themselves. In Vermont, the VPA Nordic High School Coaches Association decided to stop using all fluorinated glide waxes this season, and in Maine, high fluoro waxes were banned at the state championship.

Wax technicians, coaches and athletes have been heating the so-called fluoro waxes with irons on the base of skis and then scraping it off for years – often in wax rooms and trailers before a race. Many now wear masks and work in highly ventilated areas and wonder if they have suffered any health problems from all that exposure to the wax.

“The jury’s going to start coming back with a verdict in the next couple of years about what that meant for them,” said Jeff Clarke, a former U.S. cross-country ski team director who is now coaching the Stowe Middle/High School Nordic team in Vermont.

Snowboarders, too, are shifting away from wax containing PFAS.

While coaches say they are ready for a ban, until the International Ski Federation rules go into effect the waxes still will be used in national races, and they worry about how the ban will be enforced.

The waxes make a bigger difference in cross-country skiing, particularly in warmer conditions, than in alpine skiing, coaches say.

The International Ski Federation says it’s looking at many options for testing for the presence of the fluoro waxes and has not yet determined what will be the best approach.

“The trick is going to be finding a test, because right now they’re the fastest thing,” Caldwell said. “People will cheat at that level given the opportunity.”

So far, much of the PFAS contamination has been linked to firefighting foam at military bases and household products like carpet and packaging material that contain PFAS.

But supporters of the bans point to one site in Vermont to show that the wax can foul drinking water supplies.

A well at the site where National Guard biathletes, the U.S. Biathlon Association and the University of Vermont Nordic team train has been found to have PFAS above the state’s interim standards for safe drinking water. The well is currently not used for drinking water, according to the Guard.

“Since there are no other potential sources in the vicinity of the biathlon well, the supposition is that the use of high fluorinated waxes by the biathletes has contributed to the PFAS found in the well,” said Lee Ann Banks, environmental compliance manager for the Vermont Army National Guard.

The waxes, however, give cross-country skiers the upper edge on race day.

“It makes a huge difference,” said Richard Rokos, head coach of skiing at the University of Colorado. “Skis are gliding better, it has less resistance. In reality it saves you energy and gives you a better performance.”

Still, he supports the ban.

“I think the goal of Nordic coaches is to eliminate the fluoro waxes and in the end of it to have uniform wax for every race, for every skier which will in that sense it will probably be more just because it will be human performance,” Rokos said.