Mackinac Island officials are joining action against two state permits given to Enbridge to bolster Line 5 under the Straits of Mackinac. 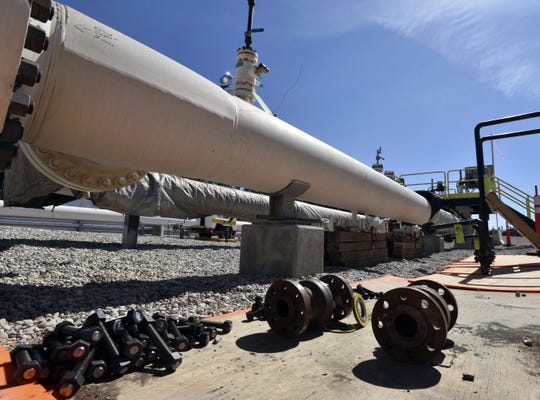 In this June 8, 2017 file photo, fresh nuts, bolts and fittings are ready to be added to the east leg of the pipeline near St. Ignace, Mich. (Photo: Dale G. Young, AP)

Mackinac Island officials on Wednesday said they are joining legal action against the state regarding the two permits given to Enbridge Energy to bolster the controversial Line 5 under the Straits of Mackinac.

Island government officials are challenging two permits issued by the Michigan Department of Environmental Quality to install supports for the dual pipelines. The DEQ issued a permit letting Enbridge install 48 saddle supports and another permit for 22 such supports.

The petition cases against the two permits were brought separately by the Straits of Mackinac Alliance and the Grand Traverse Band of Ottawa and Chippewa Indians and combined into one administrative proceeding.

Democratic Gov. Gretchen Whitmer and Democratic Attorney General Dana Nessel have questioned former Gov. Rick Snyder's decision to allow Enbridge to construct a tunnel under the lake bed of the straits to house the dual pipelines. They have questioned the legality of the construction agreement that could take up to 10 years and cost $500 million.

But Mackinac Island officials still worry about "the risk of catastrophic damage to the island" if the pipelines rupture.

“For years, Island residents have been promised that Line 5 would have a limited life span. Instead of safely phasing out the dangerous aged dual lines in the Straits, state officials have proposed to extend the operation of the dual pipelines as much as another 10 years,” said Mackinac Island Mayor Margaret Doud.

“The city, people and businesses have waited far too long. It is time to bring Line 5 under the rule of law and bring it to an orderly closure. Enough is enough.”

DEQ officials didn't have an immediate response to the legal petition.

The city's petition also airs concerns about the potential contamination of the city's drinking water supply, municipal water infrastructure, interruption of ferry and freight service and suspension of solid waste disposal if the 65-year-old pipelines ruptured.