This story is part of the series 1967 detroit riots 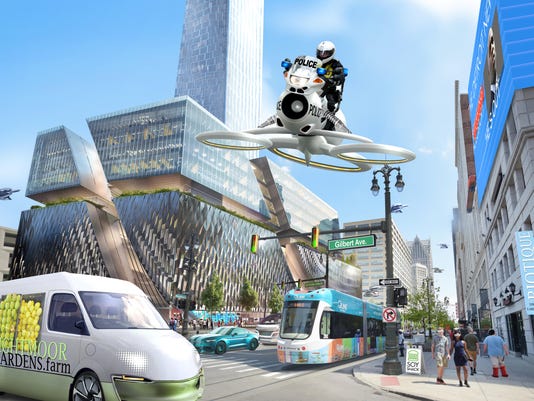 Grand visions for the future of downtown Detroit stands in contrast to stagnation in the neighborhoods.(Photo: Photo illustration by Rob L'Heureux and Daniel Mears / The Detroit News)Buy Photo

Trying to predict the state of Detroit 50 years from now is an idealistic pursuit to be sure, but keen observers from different fields of study contend the framework for the Motor City’s future is being installed now.

Several futurists — people paid to study the future and make predictions based on trends for businesses and municipalities — and urban planners envision Detroit making better use of open space, embracing its own recipe for mobility and building on a foundation being laid now by private and public entities.

There’s the nonprofit Detroit Future City, whose sole purpose is to help figure out a solid, 50-year game plan for a thriving city in the year 2067. The city needs to fill its big empty swaths of land and further boost economic opportunities for residents, the research outfit contends.

See a larger version of the image

A professional futurist who advises corporations says the Motor City’s fate depends on whether it can adapt to the game-changing technology of autonomous vehicles.

A Wayne State University sociologist says while the booming greater downtown will likely continue to lure suburbanites and whites, that doesn’t amount to a fully rebounding city.

And those decisions need to be based on how to deal with self-driving vehicles, Webb said. Among other things, Detroit will need to cope with a severe loss of tax base because autonomous vehicles will gut the number of traffic and parking tickets distributed each year. Parking meters and ticket fines contribute millions of dollars to the city’s revenue, she said.

Speaking of tax revenue, the city’s need to find new use for 24 square miles of vacant land by 2067, according to several people who study urban planning issues.

One of the key persons determining how to fill that space is Maurice Cox, director of the city’s Planning and Development Department.

“Our job is to complete what’s missing from neighborhoods,” Cox said in a recent Detroit News interview.

Last year, Cox and Mayor Mike Duggan declared the city would embrace the “20-minute neighborhoods” concept in which residents will have access to retail, public transportation and other resources within 20 minutes of their homes. In Detroit, that’s a big goal, and it has meant the city is taking aggressive roles in demolishing blight, taking control of foreclosed properties and marketing chunks of land as development opportunities.

But about two-thirds of the city’s vacant space is too small for major development, so the city must find other open space uses for it, said Anika Goss-Foster, executive director of Detroit Future City. She envisions more parks, urban agriculture with fresh fruits and vegetables, green stormwater storage or sound buffers for the road.

Sheryl Connelly, futuring manager at Ford Motor Co., said the changes Detroit is currently undergoing are encouraging. If the city stays on its current trajectory, it will be a thriving urban ecosystem, she said.

Connelly expects the city to activate more greenspace and embrace the miles of waterfront along the river, something she considers a big and, until recently, neglected stretch of land unique to this city’s downtown.

In the same way Detroit’s Big Three played a pivotal role in building the city prior to 1967’s violent summer, those companies are vital to the city’s future.

Input there is expected to come largely through the emerging mobility sector made up of ride-sharing programs, self-driving cars, electric vehicles, public transportation and bike-share programs still trying to find a niche in Detroit.

“There’s a sentiment among sociologists that you don’t have change without pain,” Connelly said. “Perhaps the reason Detroit hasn’t embraced the same (transit options) as other cities (is) we don’t yet suffer the pain with gridlock...When more people move, then that will happen.”

That influx is expected from the transient millennial workforce that’s already shown a love for urban living.

She anticipates a “churn” in that workforce as people flood into the city at Quicken Loans and other companies located downtown. There is a high turnover rate among millennials, but with the youngest members of that generation just entering the workforce, there’s still growth to be had.

“It will be like a turnstile,” she said. “You’re going to see much more cross pollination” that comes when people move from city to city with new jobs. That will drive change in the greater downtown area, which should spill over into the neighborhoods, she said.

Detroit Future City has partnered with neighborhood block clubs to assess the needs of residents — something Goss-Foster said Detroit will see more of in the future.

Detroit in 2067 should also have retail — such as boutiques, dry cleaners, restaurants and art galleries — in more neighborhoods scattered across the city, Goss-Foster said.

But for that to occur, the city must invest in entrepreneurship programs for its residents.

“Accessibility to help people start those kinds of businesses is something that we still need to see happen,” Goss-Foster said.

Detroit Future City also wants to help the city stabilize its neighborhoods in the next 50 years. Goss-Foster said many rental homes are being leased at high prices with low-quality conditions.

Part of the problem is residents can’t afford to keep up the houses, she said.

But Goss-Foster has a solution: “People in Detroit have to make more money,” she said, adding the city could benefit from 50,000 new jobs in the next 50 years. And those jobs need to cater to the skill sets of Detroit residents or companies must be willing to train them, she said.

New development in “greater downtown” will continue to attract young professionals and white suburbanites in the next five decades, said R. Khari Brown, a sociology professor at Wayne State University focused on race, religion and politics.

Greater downtown refers to the 7.2 square miles of the city — downtown, Midtown and Corktown — that’s seen a steady influx of new residents, many white, and billions of dollars in new investments since 2000.

But the migration of whites doesn’t mean the city will become integrated if it stays on the same track.

Brown said housing rates downtown continue to exceed the income of the average black resident in the city of Detroit.

“The racial boundaries may shift,” said Brown, adding Detroit will be segregated between the neighborhoods and “greater downtown.”

“It’s similar to what’s happening in other parts of the country, really every city,” Brown said.

Brown said the city has work to do if it wants a complete turnaround from the 1967 uprising.

Black residents, he said, still don’t have fair access to affordable housing, quality education and jobs in all parts of the city.

“As long as there are gaps in the opportunity structure, people aren’t going to be particularly happy,” Brown said.