No delays from bridge fire with 2nd span, company says 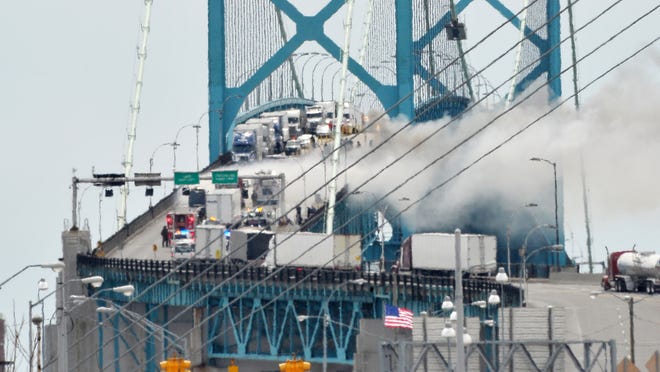 Detroit — Tuesday's pickup fire on the Ambassador Bridge wouldn't have impeded traffic if a six-lane span had been built alongside it as proposed by bridge owner Manuel "Matty" Moroun, a spokesman for the bridge company said.

The bridge company has been fighting Michigan and Canadian government plans to build a $2.1 billion bridge, insisting it will harm the Ambassador's business.

"Our new enhancement span would have accommodated the free flow of traffic without delay today, were it not for bureaucratic red-tape," Ambassador Bridge Company spokesman Mickey Blashfield wrote.

A cause has not yet been determined Tuesday afternoon in a vehicle fire that closed the bridge in both directions for nearly three hours.

There were no injuries, officials said.

The fire involved a pickup heading from the U.S. side over to Windsor, Blashfield said of the accident that closed the bridge from 11:30 a.m. to 2:15 p.m.

"We appreciate the swift action of the Detroit Fire Dept. and the accommodation by border agencies to restore border traffic after an emergency event today," Blashfield said in a statement.

Flames and dark billowing smoke caught the attention of drivers and business owners along Fort Street.

"Yeah, they have a pretty good fire going on the bridge," said Mark Smith, an employee of Bond & Bailey Machine Co., which is next door to the bridge. "You can see flames shooting right off the top of the bridge, about 100 feet from the first upright that says 'Ambassador Bridge.' Traffic is all backed up on Fort Street and everything.

"There's a lot of people standing around taking photographs and there are helicopters flying all over the place."

Smoke could be seen from the customs patrol booths, and police, fire and EMS personnel are on the scene.