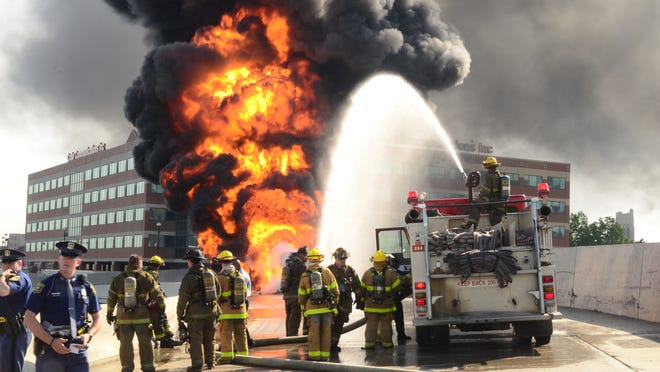 Detroit — The state Department of Transportation was assessing damage from a tanker fire Sunday to determine when northbound Interstate 75 through Detroit would reopen. The Michigan State Police confirmed the I-75 northbound ramp at I-375 is still closed, as of Monday morning.

The tanker blast occurred on a curved bridge Sunday morning at I-75 at Interstate 375 that takes northbound I-75 travelers take over the Gratiot Avenue underpass, closing the ramp and snarling traffic on a busy Memorial Day weekend with multiple downtown events.

No one was injured in the blaze, which sent huge plumes of smoke into the air shortly after 8:45 a.m. at what is known as the Stroh's Curve at I-75 and I-375. The tanker was carrying 9,000 gallons of unleaded gasoline.

Michigan State Police said the driver of the truck from Nour Light Petroleum Transport, based in Dearborn, reported mechanical issues that caused the vehicle's back tires to lock up and the tanker to overturn.

Representatives for the company could not be reached Sunday for comment.

"He was able to escape the fire by running down the exit ramp," said Michigan State Police Lt. Mike Shaw.

"It was a slow-starting fire that allowed him to escape."

Southbound lanes reopened but MDOT spokeswoman Diane Cross said state transportation officials would inspect the I-75 bridge for safety before I-75 at I-375 would reopen. She still did not know when the inspection would be completed.

As of late Sunday, MDOT recommended these routes for traffic heading out of downtown Detroit:

A hazardous materials team was on the scene to try to prevent gasoline from draining into the sewer systems.

Curtrise Garner, a spokeswoman for the Detroit Water and Sewerage Department, noted that the water and sewerage systems are separate and that the incident had no impact on drinking water. The department did not receive any complaints from residents about a funny taste or smell, she said.

Garner said any gasoline that entered the sewers will be cleaned and treated.

"Our waste water treatment plant is equipped to handle all hazards," Garner said.

People near the interchange said they heard an explosion Sunday morning and called 911. Some people outside Comerica Park before the Detroit Tigers game heard the boom of the fuel-sparked blast.

The fire made traffic a headache for visitors heading downtown for the afternoon Tigers game against the Astros as well as other events like the Movement festival.

All were forced to find alternate routes as state police diverted cars from I-75.

Even Tigers pitcher David Price was caught up in the congestion.

"Keep going," tweeted John Malkoski, statistician for the Toledo Mud Hens baseball team. "We could use you on the mound tonight at 6."

Staff Writer Christine Ferretti and the Associated Press contributed to this report.