The project includes the full reconstruction of 6.7 miles of I-94 between Conner and I-96 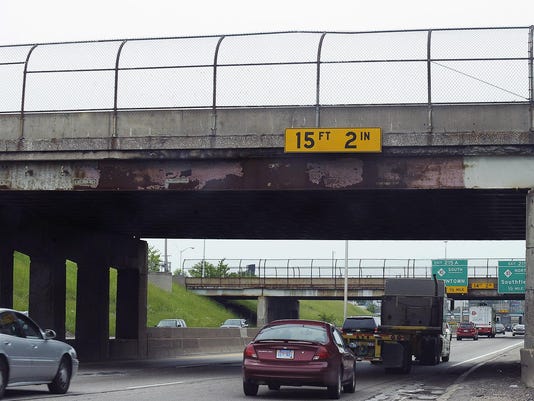 The project includes the full reconstruction of 6.7 miles of I-94 between Conner and I-96, including utility replacement, the rebuilding of 67 overpasses, changes to the I-94/M-10 (Lodge Freeway) and I-94/I-75 interchanges.(Photo: Clarence Tabb Jr / The Detroit News)Buy Photo

Detroit — It will take 20 years and nearly $3 billion dollars, but the reconstruction of a nearly seven mile stretch of Interstate 94 in downtown Detroit is slowly inching forward.

That was the message Monday morning from the Michigan Department of Transportation on the project that will stretch from Conner to I-96.

"That stretch of roadway has never been reconstructed," MDOT spokesman Rob Morosi said Monday. "It's been patched and paved but never reconstructed. For the safety of the public, it just can't go on this way any longer. That's why it has been moved to the top of our priority list."

The project would include the rebuilding of 67 bridges and six railroad overpasses, new drainage and utilities and changes to the I-94/M-10 (Lodge Freeway) and I-94/I-75 interchanges.

According to MDOT, actual construction on the freeway itself would begin in 2019 and be completed in 2036.

MDOT has identified 10 bridges that require immediate replacement due to age and advanced deterioration. They include:

■Trumbull, constructed in 1954 and listed in critical condition. To be rebuilt in 2016.

The federal government has also approved the widening of the freeway from three to four lanes in each direction.

According to MDOT senior project manager Terry A. Stepanski, the additional lanes would not widen the footprint of the freeway in downtown Detroit.

"Currently, the freeway has 45 degree slopes that come down to the roadway," Stepanski said. "We would excavate the dirt and erect barrier walls similar to those on I-96 and I-696. The freeway would basically become a channel. But we're still analyzing whether we should put in the additional lanes."

According to MDOT, building the freeway would, at this time, require the acquisition of 300 parcels of land, the majority of them small plots of land with no dwellings on them.

"Only 39 of the parcels have structures on them," Stepanski said. "Sixteen homes and 18 commercial displacements, but we are still looking at conceptual plans as we go along, so things may shift and change as we go along."

According to MDOT, if the project was to go into operational mode today, the projected cost would be $1.9 billion in 2013 dollars.

"We are looking at ways where we may be able to increase the federal share, which would decrease the state share," MDOT metro region engineer Tony Kratofil said.

MDOT also plans on holding a number of public meetings on the proposed project in an effort to gather the ideas, thoughts and concerns of interested parties, especially those who drive, live or work within the I-94 corridor.

MDOT to host open houses on future I-94 project