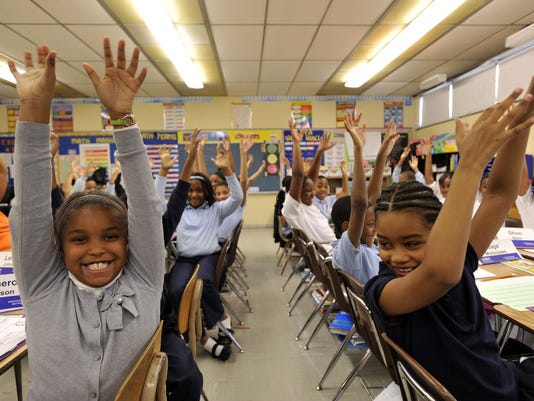 Detroit — Just 1 in 10 schools serving Detroit students received a high enough grade to be recommended by a nonprofit that evaluated more than 200 schools.

Of the 212 schools evaluated by Excellent Schools Detroit, 21 received a grade of C+ or higher — 15 K-8 schools and six high schools.

Excellent Schools Detroit, a coalition of community and education leaders, used test scores and survey data from students, parents and teachers in formulating the grades.

The coalition, with help from several partners, also measured student growth across all schools. In addition, a new "college success measure" was used to determine the likelihood that a student at a given high school will graduate and succeed in college, accounting for 40 percent of a high school's grade.

Excellent Schools Detroit's report card is the second the organization has released on the K-12 schools that serve Detroit children. It covers Detroit Public Schools, the Education Achievement Authority, charters, parochial schools and suburban schools that enroll students from Detroit.

The initial survey was based on visits by volunteer evaluators, progress on test scores during the year, student and teacher surveys and the percentage of students qualifying for free or reduced lunch, or who were classified as special education or English language learners.

Dan Varner, CEO of Excellent Schools Detroit, noted the changes in how the nonprofit evaluated schools for the latest survey.

"This year we increased the weight of academic indicators, including growth and outcomes, from 70 percent to 80 percent, and also compared performance to schools and students statewide," he said. "Overall, to earn a C+ or better, schools had to outperform the average school statewide."

"The top schools have an obsession with preparing their students for the academic rigors of college," Varner said. "They individualize learning, meeting students where they are, and intervene until every student is on track and ahead."

DPS spokesman Steve Wasko said "it is critical that we have a great school in every neighborhood in order for the city to prosper."

"This scorecard lifts up the work of educators at DPS schools, many of which are not specialty schools but campuses tucked into neighborhoods and serving as the building block of that community. Top, high quality schools such as Davison, Maybury, Charles Wright, Vernor and others are key to maintaining or building up the stability of the neighborhoods they serve," Wasko said.

Steve Conn, president of the Detroit Federation of Teachers, said the survey's low number of recommended schools "shows the complete failure of the governor's education program. That program focuses on every parent getting to shop around instead of providing first-class public schools in every neighborhood as they do in Grosse Pointe, Bloomfield Hills or other wealthy districts."

"When parents shop around here, what do they get? Schools that earn a C, D or F grade," he said. "It clearly shows a failure to provide quality education."

In May, Excellent Schools Detroit released its 2015 Early Learner Scorecard, highlighting the top 140 early education programs in Detroit and within a five-mile radius in Wayne, Oakland and Macomb counties.

Excellent Schools' Detroit K-12 Scorecard and its searchable information can be viewed at http://scorecard.excellentschoolsdetroit.org/.