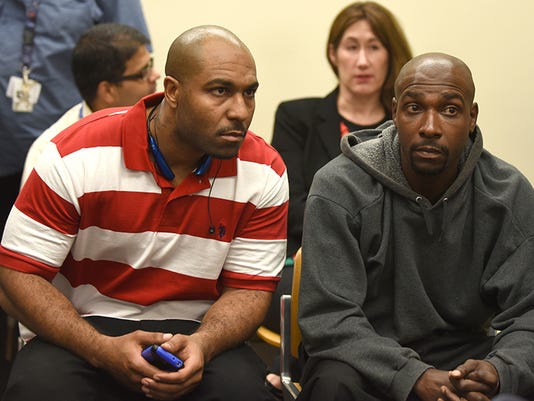 Detroit — A state attorney told the fathers of Mitchelle Blair's children they are just as responsible for the abuse, torture and death of the children whose bodies were found in March because they abandoned and deserted them.

Kelli Megyesi said Alexander Dorsey and Stephen Berry are "trying to pass the buck" for their roles in the tragedy.

Dorsey and Berry sat quietly during the tongue lashing from Megyesi during the conclusion Tuesday of a hearing about whether the parental rights should be terminated for Blair and the two men. All three are seeking rights over Blair's two surviving children, an 8-year-old boy and a 17-year-old daughter.

Megyesi said the surviving children had to wake up every day knowing their siblings were dead in the family freezer in their townhouse at the Martin Luther King complex on the city's east side while Dorsey and Berry got to eat, breath and live their lives every day.

The fathers, Megyesi said, could not "be bothered " and did not "care enough to see if your child is living or dead."

As she has done at most of her court proceedings Blair interrupted the hearing several times Tuesday saying she wanted her surviving daughter to testify because she will tell the truth about the fathers' roles in the kids' lives.

At one point, Blair became so agitated she asked Wayne County Judge Edward Joseph to be removed from the courtroom.

Attorneys for Dorsey and Berry said the fathers aren't to blame for the abuse Blair inflicted.

Adam Devlin, Dorsey's attorney, said he reported in 2005 injuries to his daughter he suspected Blair of causing. Devlin said Dorsey also tried to see his children but was restricted by Blair to remain on the porch when he came to visit.

Laura Anderson, who represents Berry, said her client had a relationship with his sons and that he "never saw Ms. Blair being abusive to the children"

Anderson blamed Child Protective Services for not following up on investigations in 2002 and 2005 involving referrals for possible child neglect and abuse by Blair.

Blair's attorney, Janice Burns, said if the dads had been involved in their lives they would have been able to offer her "a safety net."