Project to revitalize Marygrove neighborhood being retooled in wake of complaints, including shoddy work by contractor 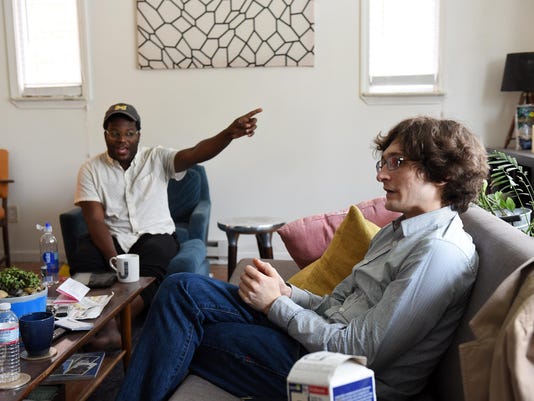 Jay Meeks, left, and Jonathan Martin say they got shoddy work from the contractor hired through a public-private neighborhood project.(Photo: Robin Buckson / The Detroit News)Buy Photo

But the program that began with high hopes ended in frustration for Martin, a 30-year-old Ypsilanti resident.

Martin bought a run-down home on Roselawn Street last year with plans to use grant money to restore it. He’s now bowed out of the project, after struggling with what he claims was shoddy contractor work, improper permitting and bureaucracy.

The goal of the public-private program was to empower homeowners, with financial help, to arrange repairs to vacant, dilapidated homes. It was among several programs initiated after Detroit’s bankruptcy to help deal with the staggering amount of blight in city neighborhoods.

But some homeowners have complained about the quality of renovation work they’ve arranged, and there are concerns that the program model won’t do enough to boost property values in the Marygrove neighborhood.

It’s now being retooled to shift the burden of renovations onto a participating housing agency, not property owners, before the homes are sold to make them more attractive to buyers. The program is among a handful of home renovation assistance programs taking place with land bank properties and reflects the challenges of starting from scratch to rebuild Detroit neighborhoods, those involved say.

“There is no science to fighting blight,” Martin said. “There’s no model that we can transplant from another city to Detroit, and that we know is successful.”

Under the program, land bank properties were auctioned online. Talmer committed up to $1 million in forgivable grants — up to $25,000 per homeowner — to rehabilitate the homes. A Detroit nonprofit agency, Southwest Housing Solutions, was brought on to manage the project, guide homeowners and administer funds.

Program organizers and new residents say the massive task of renovation hasn’t been easy. And for at least two homeowners, frustrations over work quality have led to additional headaches.

For Martin, things “quickly went off the rails” after he bought the house on Roselawn for $6,400 and began working with the lowest-bidding builder recommended by Southwest.

Redford Township-based Build One Construction, a firm tapped to renovate some land bank auction homes — including Martin’s — has since been dropped from the project amid allegations that sparked a state investigation.

The allegations of improper permitting and subpar work prompted the city’s building department this month to temporarily halt Build One’s registration and ability to pull permits in Detroit. A complaint against Build One also is pending with the state Department of Licensing and Regulatory Affairs.

Martin agreed to Build One owner Mark Smith’s $27,000 bid for myriad repairs from roofing to the garage, window trimming, plumbing and electrical.

Martin complained to the contractor, bank, Southwest and city about loose plumbing, improperly sealed duct work, uneven tile and other work he’s claimed was done poorly and without permits.

Ultimately, Meeks fired Smith in October and filed a state grievance against him.

Meeks, in his complaint to the state alleges lumpy drywall, non-repaired and ripped holes in the wall, poorly executed caulking and trim on the windows, an uneven rear porch and crooked bathroom tiles. He also claims various projects were done without permits.

“In my opinion, all the work he had to do could have been done in one month if he had been here doing it and doing it properly,” said Meeks, a 30-year-old Ph.D. student and secretary of the Marygrove Community Association.

Smith did not return calls from The Detroit News seeking comment. Nobody answered the door when a reporter visited his business address, a home in Redford Township.

Residents who bought land bank homes under the Talmer program have been able to use any contractor of their choosing. If they seek assistance, as Meeks and Martin did, Southwest provides homeowners with recommended contractors, including Build One.

Contractors submit bids for work to homeowners. Southwest then distributes grant dollars for rehab work as it’s completed and verified by city inspectors.

Smith was referred to Southwest by a prior satisfied client and successfully completed another project in Marygrove.

But based on the troubles experienced by Meeks and Martin, Southwest is no longer working with Build One, said Todd Burk, director of lending for Southwest Housing Solutions.

There are now 17 homes in the pilot; one has a certificate of occupancy from the city, according to Burk. Six are in the initial stages, and 10 others are further along. About half of the 10 of the homes nearing completion are expected to undergo final city inspections in 45-60 days, Burk said.

Not everyone has had problems.

Steven Josephson, 28, and his wife, Corey, 33, bought a home on Greenlawn in April and say the program has been a positive venture.

The couple are teachers and working on a tight time line. They hope the home is move-in ready by the end of the month.

“As new as it is, I’ve been pretty happy with the program,” Steven Josephson said.

Talmer’s executive managing director, Patrick Ervin, says Talmer will have disbursed $455,000 directly to homeowners in the program by September. But the pilot project hasn’t produced the results as quickly and substantially as officials had hoped, he said.

Extensive rehabilitation can be intimidating for first-time homebuyers, he said, and rock-bottom auction sale prices aren’t doing much to improve market value comparisons in the area.

Under the revised approach, Southwest has begun buying houses from the land bank and rehabilitating them with funding provided by Talmer. The homes are expected to be renovated within 60-90 days and then be salable at market rate in the neighborhoods.

“Ultimately, we want to get market forces running in our favor,” he said.

Robin Boyle, a professor with Wayne State University’s Department of Urban Studies & Planning, said these programs are innovative but experimental.

“We are in untraveled waters,” he said. “The land bank and others are just exploring the different options as they move toward removing blight, getting houses back on the tax rolls and back into the market.”

Martin is selling his home back to Talmer, and the bank is willing to buy back homes from any dissatisfied participants, Ervin said.

“I’m grateful that Talmer did step in to mediate, but I’m still as far from having a place to live of my own as I was nine months ago because of this fiasco,” Martin said.