The former Detroit Tigers outfielder hosted a youth baseball training program at Bradby Park this summer and found its recreation center needing a new roof. If the building is overhauled, he hopes to launch an effort for young sluggers and other aspiring athletes to train and learn to bat year-round.

“It’d just be another place where these kids can get off these streets and do something,” Blessitt said. “It’s a big opportunity.”

That’s why he hopes supporters step up to the plate through Pitch for Detroit. The annual one-day sports tournament, which is headed by the Jewish Federation of Metropolitan Detroit’s NEXTGen Detroit division and takes place on Belle Isle, has raised thousands of dollars for a cause every year since 2010.

An estimated 800 people are expected to attend this year’s event, which aims to raise $30,000 to allow Bradby Park to reopen its “field house” as well as upgrade sports fields and create a shaded outdoor area for community programs, coordinators said.

“It’ll really help expanding the ability of this park to be a communal space for the neighborhood,” said Hayley Sakwa, co-chair of Pitch for Detroit. “I really believe in the power of communal spaces. I think that parks create healthier and safer neighborhoods.” 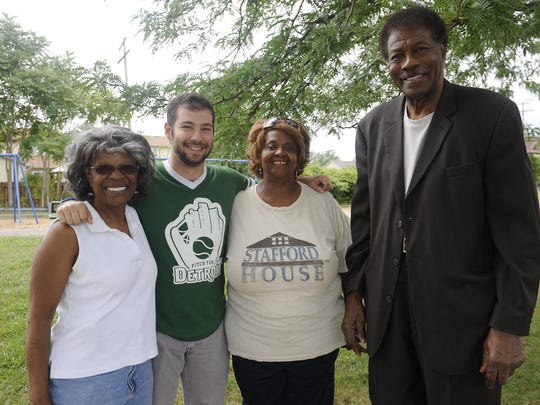 Sakwa, who works at the United Way for Southeastern Michigan, already was familiar with Bradby Park since it’s a summer site for the Meet Up and Eat Up initiative her nonprofit coordinates.

“The fundraiser will let Bradby give life back to the community,” she said. “Kids really need safe places to go. They learn so much from the different activities. It enhances the sense of community.”

Bradby Park is about a mile from where the first Detroit Jewish Community Center broke ground at Woodward and Holbrook in 1933, Sakwa said.

“I think it’s really cool that we have an opportunity to return to a space where there were once a lot of Jewish people present and facing a lot of the same issues,” she said. “It’s important for us to recognize we can be strong supporters of the work that’s happening by community members and help them revitalize their space.”

For information about donating, volunteering or participating: http://jewishdetroit.org/pitch/