At 75, biker club still cruising after all these years

Sandwiched along West McNichols in Detroit between two buildings that appear to be abandoned, sits a red brick structure that houses a two-wheeled history dating back to the Great Depression. 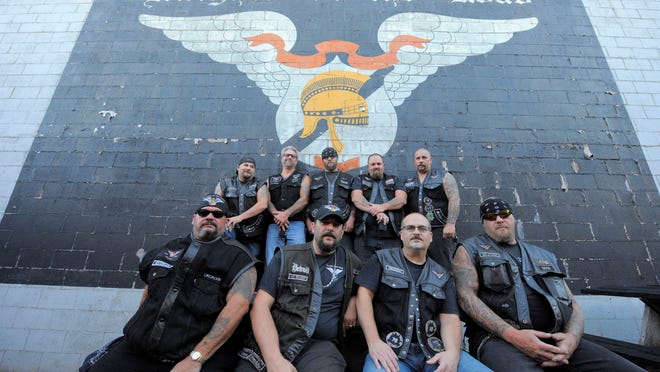 Inside, a dozen or more men are scattered around the bar wearing intimidating stares, leather vests and blue jeans, as if they were ripped from a scene of “Sons of Anarchy.”

But these bikers aren’t outlaws — they’re members of one of Michigan’s oldest and most respected motorcycle clubs, the Knights of the Road.

Last month, the club celebrated its 75th anniversary, proving that the good guys can stand the test of time, members say.

Pete Demos, who has been a Knight for five years, insists one of the reasons for the club’s longevity is its neutrality.

“We are like the Sweden of motorcycle clubs. We have never been in any biker wars,” Demos said. “If someone tried to come in here today and start a fight, other clubs would be really pissed off.”

According to Calvin Barrett, the club historian, the Knights came from humble beginnings.

“A group of guys started riding together in 1939,” Barrett said. “Motorcycles were a lot cheaper than cars during the Great Depression. Ever since then, those guys just kept riding and never looked back.”

The club originally was called the Kings of the Road, but members soon renamed themselves the Knights because knights saved damsels in distress.

During World War II, because the Knights had uniforms that were similar to police officers, members of the club were asked to help patrol the streets to keep order, according to Barrett.

Since then, the club has grown to more than 30 members. It has charter chapters in Maryland and Kentucky, made up of members who moved away from Detroit, and hosts charity events each year.

“We raise money for children with disabilities and donate to Toys for Tots, Barrett said. “People wouldn’t think that a motorcycle club would be that much involved in the community, but you can’t always assume that we are all mean.”

Some say the outlaw image that surrounds biker clubs grew out of the Gypsy Tour motorcycle rally in 1947, when thousands of bikers descended on the small town of Hollister, California.

The resulting chaos caused by the crowds — some of whom drank heavily and damaged property — became known as the Hollister Riot. A photo of a beer-swilling man sitting on a motorcycle, published in Life magazine, conveyed an image of reckless and dangerous behavior to a shocked nation.

“We get a bad reputation because of how motorcycle clubs are portrayed in the media. People think we are dirty, but we are not out here breaking the law. This is a family club,” said Mongo Keilman, vice president of the Knights. “If anyone trying to be in our club is trying to do anything illegal, we are kicking them out. We don’t go for that.”

The Knights became a part of the American Motorcyclists Association in 1945, an organization that advocates for motorcyclists with local, state and federal governments.

“There have been no breaks in our membership with the AMA. We have never been banned. This is a solid club that looks out for its guys, not just during hard times, but all of the time,” Barrett said. “Family first, job second and then the club third. In that order.”

Peter terHorst, an AMA spokesman, said it’s uncommon for a motorcycle club to have such a long, continuous membership with the organization.

“Only a dozen or so clubs, mostly in larger cities have continued to be in good standing with the AMA,” terHorst said. “The Knights have kept a good face to the community and have continued to do all of the right things.”

While the Knights have kept a clean record, earlier this year, the leader of the Phantom Outlaw Motorcycle gang, headquartered in northwest Detroit, was sentenced to 35 years in prison for racketeering and conspiracy to commit murder.

According to an FBI survey, outlaw motorcycle gangs are the exception, not the rule. The agency estimates 2.5 percent of motorcycle club members belong to gangs involved in illegal activity.

To be considered, the person has to be recommended by a member and go through an extensive background check. If approved, there is an eight week probation period.

High school friends Brian Redloff and Dan Tracey planned to join at the same time four years ago, but Tracey had to wait until a few months later to be initiated.

“My bike broke down the same day. I mean, what are the odds of that, but Brian was able to sponsor me four months later,” said Tracey, now the club’s sergeant-at-arms. “In a lot of ways, this is a real brotherhood. I met great people through here.”

Rick Shornak didn’t have any intentions of being part of a motorcycle club. Five years after joining the Knights he’s now the president.

“I came to the clubhouse once and I was hooked after that. This club has such a rich history and real sense of pride and camaraderie,” Shornak said. “What can I say, I love the Knight life.”