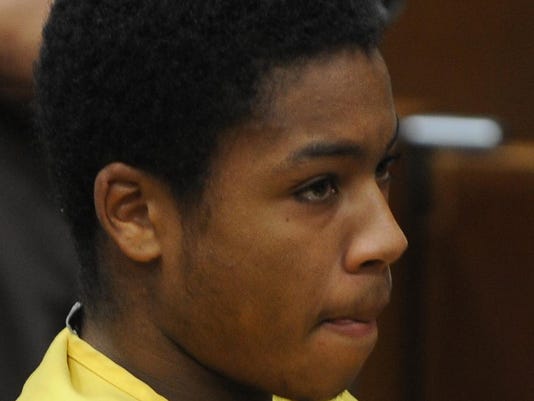 One of four defendants in the killing of French street artist Bilal Berreni was sentenced Wednesday to a lengthy prison term for the armed robbery of the Paris native.

Dionte Travis, 18, was sentenced to 16-40 years behind bars for the crime before Judge Dalton Roberson. He faces a retrial on a murder and weapons charge Nov. 30 in Wayne Circuit Court.

Berreni, 23, was killed in July 2013. He was robbed, beaten and shot to death. His body was found near the now-demolished Brewster-Douglass public housing projects at Mack and Interstate 75 near Detroit’s downtown.

Berreni was living in Detroit when he was killed. It took authorities several months to identify his body through DNA and fingerprints because he did not have any identification. It is believed to have been taken from him during the attack.

Another defendant, Drequone Rich, 21, will be sentenced Friday. Rich, who accepted a plea deal, faces 23-40 years in prison on second-degree murder charges. Rich admitted to being the lookout man who stopped the victim from escaping. Rich could have faced life in prison without the plea agreement.

“I don’t think a trial is the best idea for me,” Rich told Wayne Circuit Judge Bruce Morrow on Thursday. “I’m guilty.”

Another man, Jasin Curtis, 19, also pleaded guilty and was sentenced in June to 27-40 years for robbery and murder.

A fourth defendant, who was 14 at the time of the crime, faces trial in December before a juvenile court judge.