Cheryl West was unable to pay her taxes, and her Detroit home was sold for $15,600.(Photo: Jose Juarez / Special to The Detroit News)Buy Photo

Wayne County’s tax foreclosure auction — the largest in North America — is stoking fears of widespread evictions in Detroit, where an estimated 8,000 of the 25,000 homes up for sale this month are occupied.

The online auction of properties with at least three years of delinquencies began in September and continues this month. But its full toll may take months to realize, when deeds are transferred, court hearings are exhausted and evictions are served.

That day of eviction after last year’s auction still haunts Cheryl West, who was kicked out of her home of 60 years in May after it was sold to a landlord to satisfy $15,600 in back taxes.

The day began with a morning knock on the door by a court officer and ended at sundown with her belongings in two Dumpsters.

“It was insanity. Pure hell,” said West, 68, a music teacher and former medical writer. “I wouldn’t wish it on anyone. ... I’m afraid for a society that condones this sort of treatment of senior citizens.”

The county has foreclosed on 110,000 properties since 2005 because of unpaid taxes. The vast majority of those are believed to be vacant lots and homes. No data was collected on occupancy until 2014, when the Detroit Blight Task Force released a survey of all parcels in the city.

Last year, 7,600 occupied homes in Detroit were sold at auction, according to analysis from Detroit data company Loveland Technologies. Among them was West’s stately Victoria Park home, which her parents broke the color barrier to purchase in 1954.

“I’m the poster child for what can happen,” West said, who does not have any children or living siblings.

David Szymanski, who recently retired as chief deputy treasurer of Wayne County, does not dispute the overall occupancy numbers. But he said fewer than 1,000 homes at this year’s auction are occupied by owners. The remainder are renters or squatters, he said.

Treasury officials initially planned to foreclose on 22,000 owner-occupied properties but worked out payment plans with most of them for as little as $175 per month. The sale last year raised $41 million for Detroit, and state law requires officials to foreclose for back taxes.

“We’ve done what we can to help people out,” Szymanski said.

On slow days, he said he has eight clients. On busy ones, it’s double that.

“People don’t think about human cost or neighborhoods. ... You are destroying neighborhood after neighborhood in Detroit. It’s such a waste. In the last 10 years, so much has been destroyed that won’t ever be able to be gotten back.”

The vast majority are evictions. In 2013, in response to the enormous caseload, the court imposed a rule barring landlords or attorneys from filing more than 50 eviction requests in a single day.

The toll of evictions lingers long after papers are served and belongings are loaded into Dumpsters.

After she was evicted, West was taken in by a friend who lives near Dexter and Davison. In late September, West was rearranging boxes when she lost her balance and passed out.

She was hospitalized with two cracked ribs.

“It comes back to losing my house,” West said. “You can’t become bitter, but it takes a lot of staying with God not to.”

She struggled to pay the bills after the 2008 death of her sister, who also lived in the house. A Belleville landlord bought her home in the tax auction for $20,000 last year. West rented her home for a few months for $700 per month but couldn’t keep up with the payments and was evicted May 7.

A month after she moved in, Williams was in a car crash that she said left her with chronic pain and unable to work. She was able to pay enough on the mortgage to keep lenders at bay, but couldn’t keep up on the taxes. The county foreclosed last year over a $11,500 debt.

A landlord bought the house for $4,900 in the October auction, which doesn’t require buyers to pay back taxes. He rebuffed her offer to buy the house back for $5,500.

“You feel violated after losing a home. I was raised to be very independent and work hard,” said Williams, 53, who has two grown children and four grandchildren. 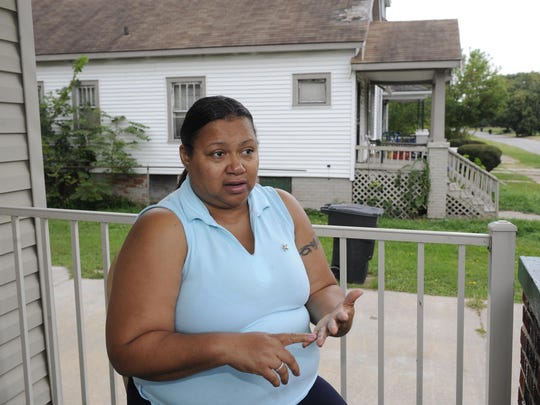 Thelma Williams was unable to pay her taxes after she was in a car crash. Her Detroit home was sold for $4,900. (Photo: David Coates / The Detroit News)

West and Williams feel they got a raw deal.

They each make less than $1,000 per month in wages and Social Security, which qualifies them for an exemption from property taxes. But the exemption is not retroactive and most do not apply for it until they are already behind in taxes, Szymanski said.

The women said they applied for aid from a state program, Step Forward, which is funded by $498 million in federal funds to help homeowners keep their properties. The process dragged on for months and, by the time they were denied, they needed to make big deposits to keep their homes.

Williams also said she wasn’t aware she could remove her home from the auction by paying a fraction of the debt, about $350 owed from 2011 taxes.

Also making it difficult for distressed owner-occupants: a new state law was enacted this year eliminating a loophole in the tax sale in which delinquent owners and real-estate firms could repurchase their foreclosed properties.

Szymanski said the wave of foreclosures needs to prompt a debate about alternative housing for the needy. Detroit is the poorest big city in the nation, with 39 percent living below the poverty threshold, according to the U.S. Census.

“There are people who have no income whatsoever. There is a problem there, but the answer isn’t to let them own a home,” said Syzmanski.

“Home ownership has obligations, one of which is to pay taxes. If taxes aren’t paid, you can’t cut off city services. The only alternative is to take the home away. It’s something we really don’t want to do.”

Homeowners who can’t afford taxes can become renters, he said. That may not be an answer for the truly needy, said Ted Phillips, executive director of the United Community Housing Coalition, a nonprofit that helps homeowners.

The handling of the auction could be an issue when a three-member panel of elected officials this month appoints a successor to Treasurer Raymond Wojtwociz. He served 39 years and submitted paperwork in September to retire Dec. 1.

Syzmanski is among a list of candidates who could be named as interim treasurer until a successor to Wojtwociz is elected. Other possible candidates include former state Rep. Phil Cavanagh and Richard Hathaway, a chief assistant prosecutor.

Five months later, West is trying to rebuild her life. She’s landed a job as music director in a church in San Antonio but isn’t sure how she’ll come up with the money to move. She hopes a relative in Texas will take her in.

West tears up discussing eviction day. She woke up hopeful for a reprieve. When it didn’t come, she sat in a car, hoping she wouldn’t have a heart attack.

“It was the most horrible thing in my life,” West said.

“Anything that you don’t have boxed and ready to go, they’re throwing in Dumpsters. Your whole life is unraveling.”

Williams said she spends much of her time resting to ease the lingering pain from the crash. She said she can’t work because she suffers from fibromyalgia, chronic pain and anxiety.

Williams doesn’t like relying on others for help and would like to own a home again. She’s not sure how she will.