Ex-Mumford High Principal Kenyetta Wilbourn-Snapp, while being targeted by the FBI in a bribery and kickback investigation, gave away a $70,000 luxury sports car that was purchased weeks later by a school contractor for $100, according to public records.

Secretary of State records help explain what happened to a 2007 Maserati Quattroporte that was a symbol to many of Wilbourn-Snapp’s outwardly lavish lifestyle.

Along with a “GUCCI1” personalized license plate, Wilbourn-Snapp’s lifestyle drew suspicious glances from some colleagues at the Education Achievement Authority of Michigan — Gov. Rick Snyder’s K-12 reform school district. They wondered about a leader in one of the poorest school districts driving a car that, new, retailed in 2007 for more than $110,000.

The records show a chain of succession for the Maserati leading from Wilbourn-Snapp to a fellow EAA principal to an EAA contractor — all of whom were named or referenced in documents exchanged among FBI agents and school personnel during the ongoing investigation. 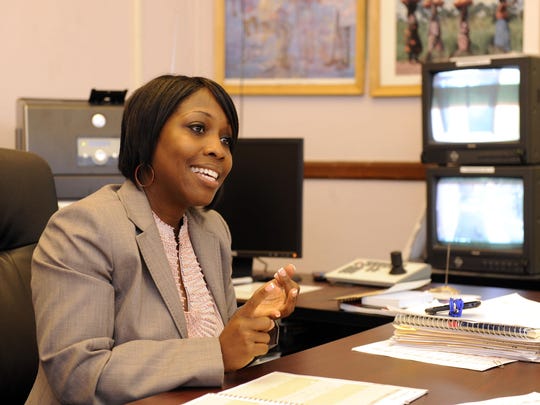 The Maserati’s ownership history emerged one week after The News revealed Wilbourn-Snapp is a target of an FBI corruption investigation of multiple officials from EAA and Detroit Public Schools.

Agents are trying to determine whether officials accepted bribes or kickbacks in exchange for approving contracts with vendors.

Wilbourn-Snapp, 40, has not been charged with a crime during the FBI investigation, though she said last week that she had reached a plea deal with federal prosecutors.

Hours after she announced the alleged plea deal, Wilbourn-Snapp parted ways with her defense lawyer.

According to internal school district documents obtained by The News, Wilbourn-Snapp allegedly admitted taking a cut of contracts awarded to vendors.

The Maserati saga dates to 2012, when the longtime educator and Detroit Public Schools principal Wilbourn-Snapp was hired by the EAA. The authority was created in 2011 in an attempt to turn around low academic achievement in 15 former Detroit public schools.

The sports car cost $69,398 and she financed the purchase through Michigan First Credit Union, records show.

Wilbourn-Snapp owned the sports car for less than two years before selling the Maserati in June 2014, Secretary of State records show.

That was at least one month after EAA officials uncovered discrepancies and “potential misconduct” in the district’s finances and alerted federal law enforcement officials.

On June 17, 2014, Wilbourn-Snapp terminated the car loan through Michigan First Credit Union and gave the Maserati to a woman she claimed was her mother, Tracie McKissic of Detroit, according to the state.

Wilbourn-Snapp signed a state certification letter stating that McKissic was her mother, according to the Secretary of State office.

The transfer saved McKissic, 53, from having to pay sales tax. 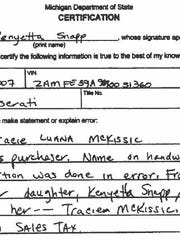 Kenyetta Wilbourn-Snapp signed this letter claiming that her mother Tracie McKissic was buying the 2007 Maserati. The move saved McKissic from paying state sales tax. McKissic, however, is not her mother. (Photo: Michigan Secretary of State)

One problem: McKissic, who is 13 years older than Wilbourn-Snapp, isn’t her mother. She was a co-worker at Denby High School until April 2013, when Wilbourn-Snapp left to become principal at Mumford.

McKissic left in June, according to her LinkedIn profile. An EAA spokesman said McKissic’s contract was not renewed.

In a brief phone interview Friday, McKissic declined to talk about the Maserati transaction.

“Wow, that’s personal, isn’t it?” she said before declining comment.

In her personnel file, Wilbourn-Snapp listed McKissic as an emergency contact alongside her real mother: Evelyn Mann.

After McKissic bought the Maserati, she owned it for about three months.

The sale happened one month before the FBI began executing search and seizure warrants in conjunction with the corruption investigation. In November 2014, agents raided a bank account belonging to another EAA contractor and seized $2,301.

Wilbourn-Snapp made an apparent reference to the Maserati during conversations she had last year with EAA Chancellor Veronica Conforme.

Conforme wrote a memo to then-EAA general counsel Michelle Crockett detailing several conversations she had with Wilbourn, according to documents obtained by The News Tuesday through the Freedom of Information Act.

“(Wilbourn) stated she had done some things that may appear to be illegal but her not like (sic) the selling of her car to a contracted vendor,” Conforme wrote on Nov. 25.

Federal investigators have subpoenaed Wilbourn-Snapp’s and McKissic’s personnel files from EAA, bank account information and copies of all work emails, according to documents obtained by The News. 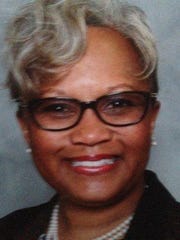 Before buying the Maserati, Godfrey, 39, was a bankrupt janitorial services employee who owned a 1984 Buick LeSabre.

The Buick was worth $1,000, according to Godfrey’s bankruptcy filing in February 2011, 10 times what state records show he paid for the Maserati.

A year after filing Chapter 7 bankruptcy, Godfrey’s name started showing up on the EAA payroll, individually and through one of his companies, Inner City Sports.

He was an EAA vendor at the same time Wilbourn-Snapp ran Denby and Mumford high schools.

Since December 2012, Godfrey and his company have received $49,990 from the governor’s K-12 reform school district for various items, including athletic supplies, footballs and equipment at Mumford High, according to public records.

In late October 2014, an FBI agent involved in the corruption investigation asked EAA’s top lawyer, Michelle Crockett, for information regarding Inner City Sports, according to school district emails obtained by The News.

“We have no record of a contract between the EAA and this organization,” Crockett wrote to the agent.