This is the second sickout this month as teachers express their disapproval of Gov. Rick Snyder’s school reform plans 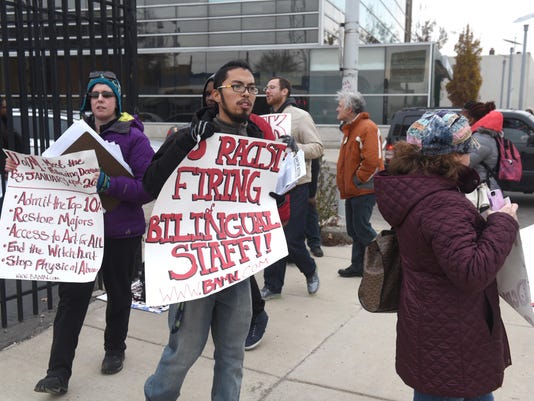 BAMN protestors hold signs as they vow to continue sickouts announced during a press conference outside the Detroit School of the Arts as seven Detroit Public Schools campuses were shut down due to a sickout on Thursday.(Photo: Max Ortiz / The Detroit News)Buy Photo

Detroit — Nearly 4,000 students at seven Detroit Public Schools buildings didn’t have classes Thursday after teachers staged a sickout, according to the school district.

This is the second sickout for the district this month as teachers express their disapproval of Gov. Rick Snyder’s school reform plans. The governor has proposed paying off hundreds of millions of DPS debt, which would be left with the existing school district, and creating a new district to educate Detroit schoolchildren.

In a Twitter post Thursday, Snyder expressed disappointment with the teachers. “We must focus on kids,” the governor tweeted. “Many parents lose a day’s pay when they miss work. How many parents must stay home today because of sick out?”

DPS has been under state control since 2009 and teachers have faced pay cuts, higher health care costs and larger class sizes.

“Detroit needs democracy,” Nicole Conaway, a teacher at East English Village Preparatory Academy, said in a statement Thursday. “For 12 of the past 16 years, Detroiters have had no democratic power to advocate for the education of their children. Teachers have been trying to make that fight through our union, and now the AFT International leadership wants to take democracy away from DFT.”

Ivy Bailey, interim DFT president, did not respond to a request for comment Thursday. Earlier this week, the American Federation of Teachers accepted a request from Bailey to assume trusteeship of the local.

In response to the sickout, Emergency Manager Darnell Earley said that education must be the focus of DPS employees and that the district has a right to review suspected abuses of sick leave.

“It is truly unfortunate that this group of teachers, who misrepresent a small minority of the good and dedicated educators of Detroit Public Schools, have chosen to penalize the students of the seven schools closed because of their unjustifiable and inexcusable behavior,” Earley said in a statement. “DPS has the right to review suspected abuses of sick leave. Any DPS teacher calling off on personal illness in connection with any reported ‘teacher sick-out’ will be subject to a review of their actions for appropriate discipline.”

The American Federation of Teachers has named an aide to President Randi Weingarten as administrator of the Detroit teachers union. Ann Mitchell, the AFT’s assistant to the president for field coordination, will take over operation of the Detroit Federation of Teachers on Tuesday, the AFT said Thursday in a news release. The AFT executive council voted Monday to accept a request from DFT leaders to put the local under voluntary administratorship.