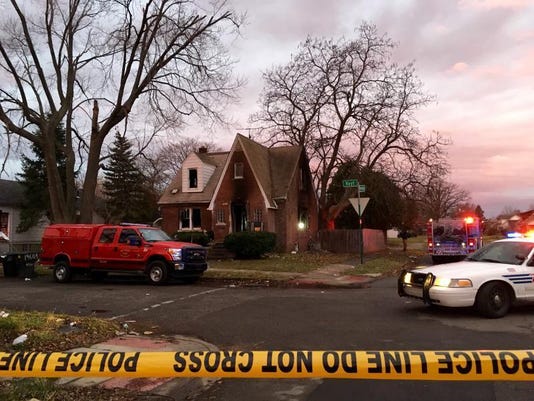 A 28-year-old Detroit man and a 24-year-old Detroit woman have been charged in a fatal arson fire that occurred earlier this week on the city’s east side.(Photo: Holly Fournier / The Detroit News)Buy Photo

Prosecutors say at 2:30 a.m. Monday, Thomas and Cross returned to a house on the 19600 block of Hoyt and threw bottles containing a flammable substance. The fire killed Cross’ ex-boyfriend, 23-year-old James Jordan, as well as 20-year-old Jana John.

Another 22-year-old male was in the house at the time of the fire and survived.

Thomas and Cross were arraigned Thursday morning in 36th District Court and remanded to jail.

“The allegations in this case are becoming all too common,” Wayne County Prosecutor Kym Worthy said in a statement. “Have we really come to the place where if someone rejects another person, the result is to seek revenge by burning a home with occupants in it?”

Authorities believe the arson was connected to an earlier domestic dispute, officials said earlier this week.

“There was an altercation last night (about) the deceased man and his ex (who is the mother of his child),” Arson Captain Pat McNulty said Monday. "We're looking for (the ex). She's a suspect."

The fire broke out when an accelerant was thrown through a first-floor window, McNulty said.

"The fire likely stemmed from a dispute between 10 and 11 p.m.,” McNulty said. Police were called during the incident.

The family was in the process of moving, so most of the family — including young children — were at their new home overnight.